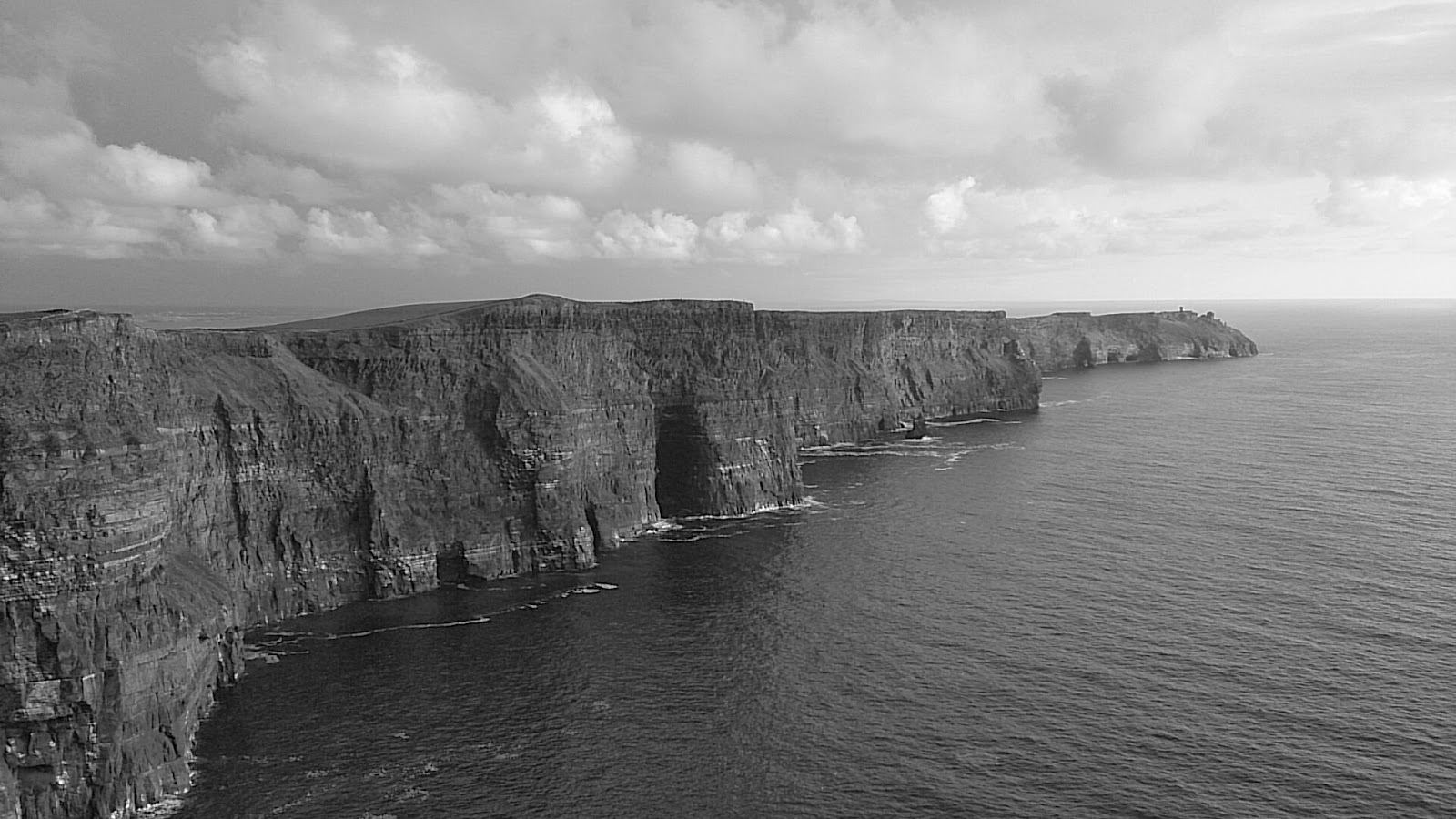 The cliffs of Moher

There is a wildness in Clare like no other. It is not the bitter and majestic wildness of County Kerry; it is instead a contained wildness. Parts of it look relentlessly barren, but this Burren holds many surprises and many places of beauty both small and vast. Any visitor making their way up the winding roads towards the cliffs of Moher cannot fail to notice a holy well dedicated to Brigid, one of Ireland’s most loved and possibly most visited holy wells. This well has a long history and over time has developed a complicated set of rounds or turas’.  My journey began with a trip to the famous cliffs and I stumbled on this well by accident. I knew of its presence in the area, but my OS map, recently reprinted, oddly decided to leave out all holy well markings. I passed Brigid’s shrine at speed, but couldn’t help but notice her solemn form encased in glass keeping watch over a vista that looked down on small dotted cottages and a small town. 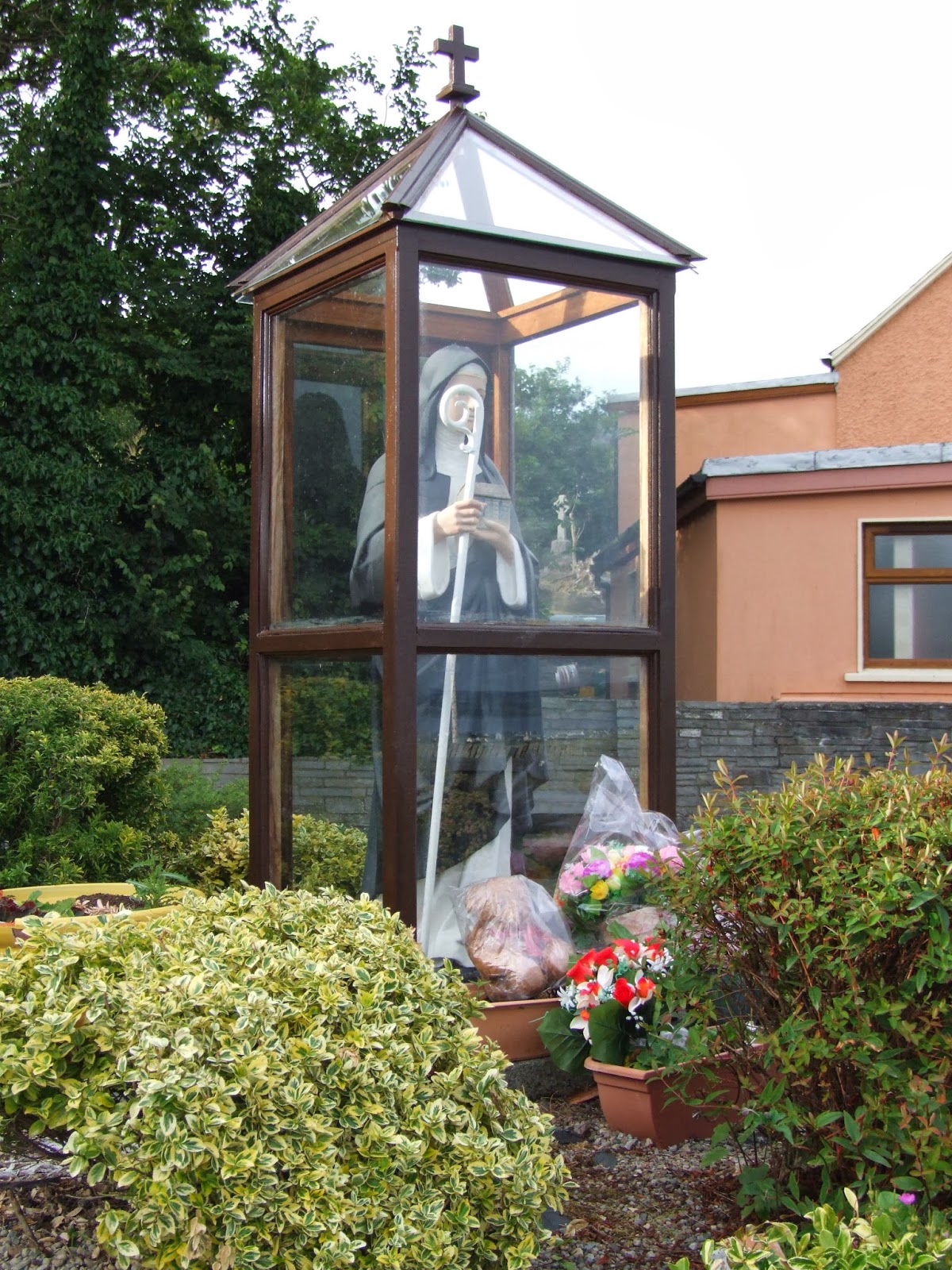 The cliffs of Moher reach a maximum of 702 feet above the roaring Atlantic, its name taken from a fort long gone. Twenty different species of birds occupy this fearsome bastion of rock and its views are certainly spectacular. Its wildness has been tamed by a somewhat ugly concrete and stone structure to contain tourists, but it is possible to make the journey along the cliffs where the structure dissolves into crumbling paths that give way to more spectacular views. Away from this exposed magnificence, just a short distance down the road is the little vale of trees that bow in solemn reverence to Brigid’s well. 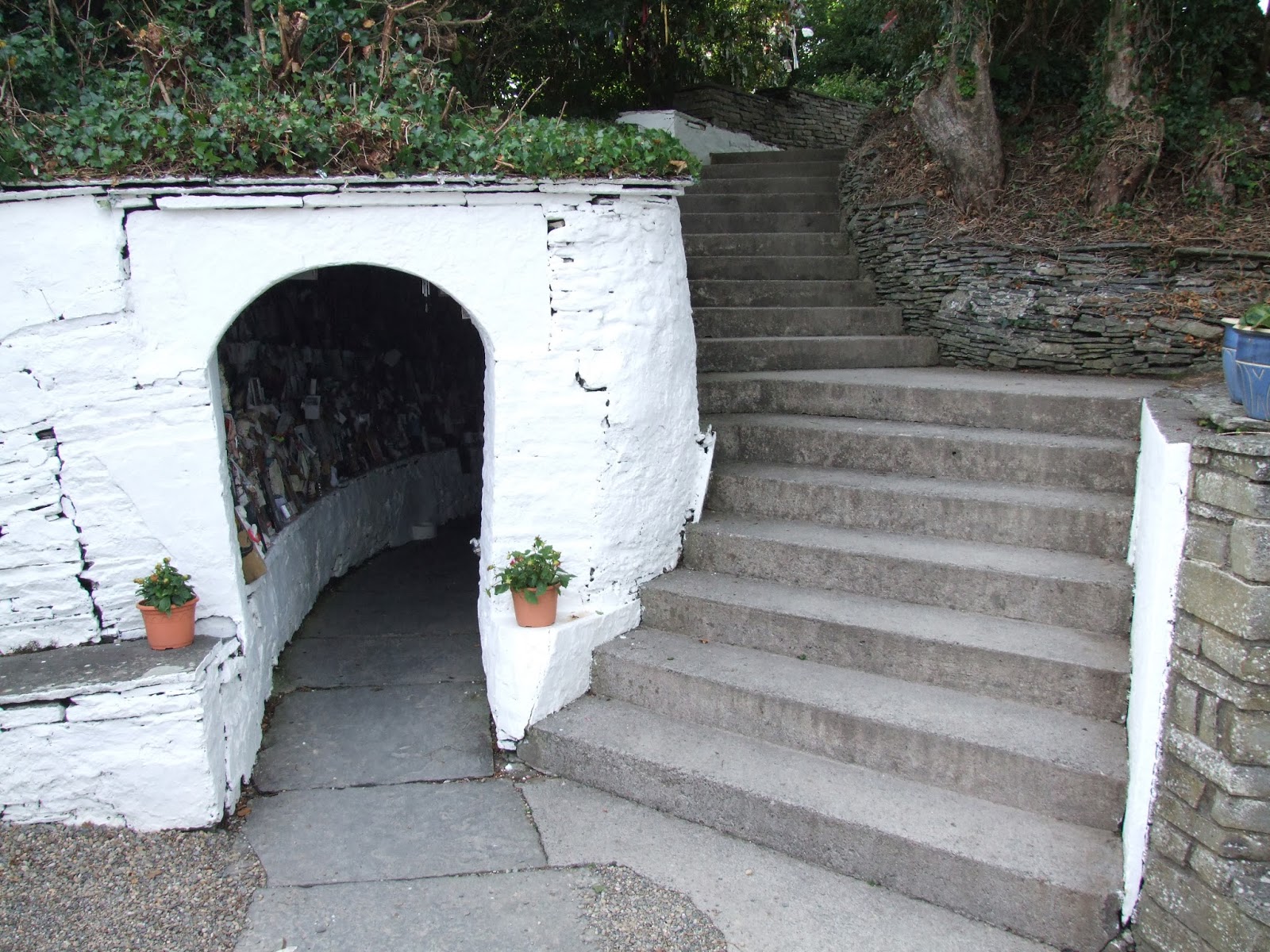 Brigid’s shrine is divided into two sections; the upper sanctuary (Ula Uachtarach) and the lower sanctuary (Ula íochtarach). From the road I pass through a small gap in the low wall into a courtyard area with a large mound in the centre topped with a statue of Saint Brigid encased in glass that sits like a great lantern in the centre with Brigid as its only flame. Various pools are exposed in the circular round, indicating the presence of the well and a white painted lintel brightly exposes the way.  It has a mysterious atmosphere as the sun begins to fall low in the sky and the great cleft in the rock feels curiously daunting. As I enter it is dark and uninviting and the smell of dampness and its embracing coldness has a penitential feel. The walls are dripping with prayer; the petitions for the sick, with expressions of thanksgiving, wails of sorrow and grief and moments of hope. Planted at their centre is a crucifix that looks hewn in hawthorn, worn down by burden and incarnationally present amidst this mass of prayer and devotion. Passing down this rock of ages a few small candles flicker towards the light rattle of water into a trough. Here is the well, said to visited by a fish – an indication that this well is truly ancient in its Christian tradition – the fish being a symbol of Christianity that predates the cross. Passing down this cleft in rock is a little like passing through time to a more ancient faith, to a purity of prayerful expression. This vale of solace is a far cry from the exposure of the cliffs. 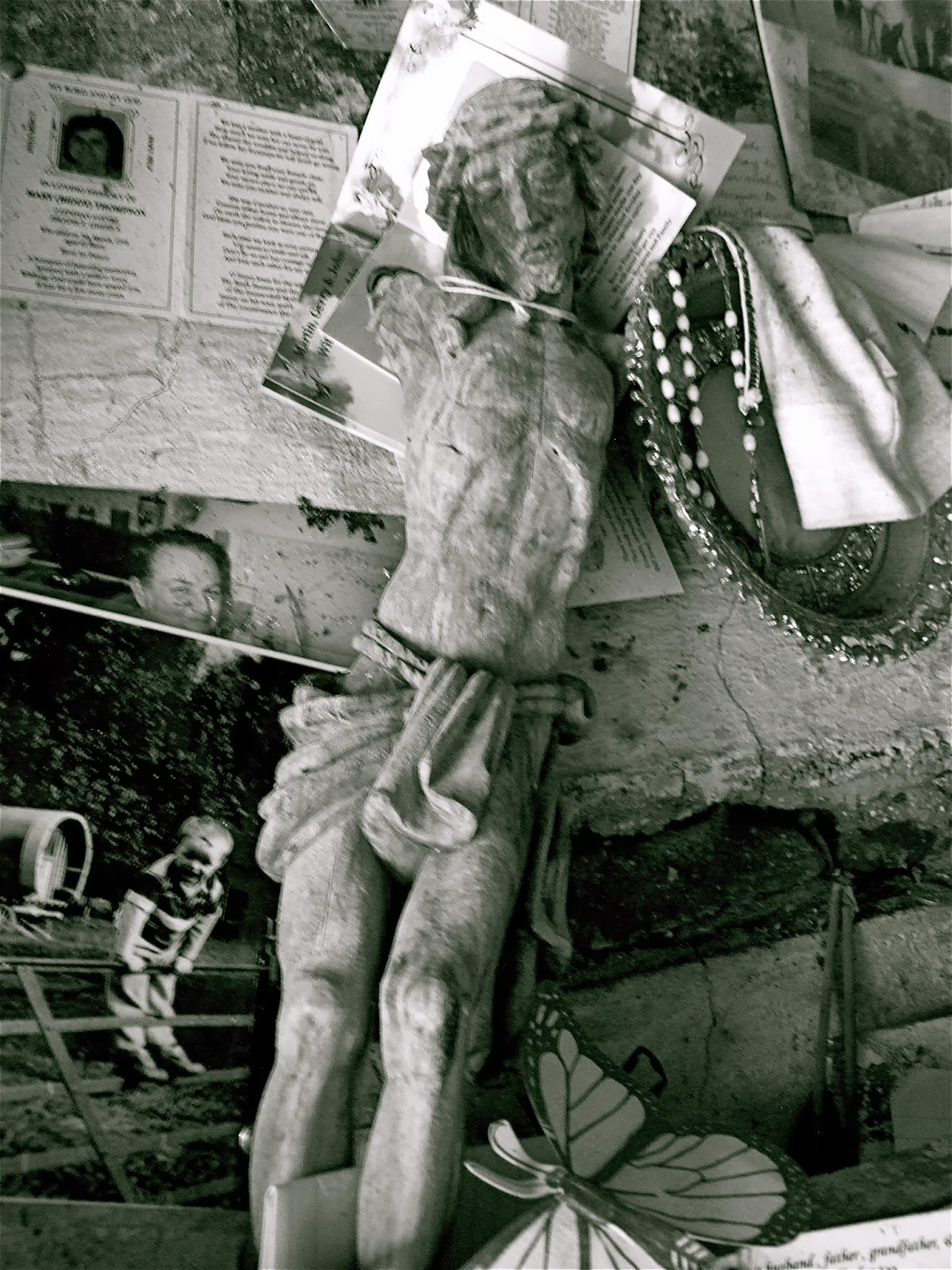 Pattern days are still observed at this well. There are four in all: the eve of the feast of Saint Brigid, Garland Saturday and Sunday, the last Sunday of July (and its Vigil – a harvest festival to ask blessings on the crops and animals) and the feast of the Assumption in August. In the past great gatherings of many hundreds of people took place here with people from all over County Clare and the Aran Islands who covered the site in small flickering candles as they prayed. The Rite of Saint Brigid at the well is still said today, although in a slightly less demanding format. The pilgrim makes a salutation to Christ, then Brigid and Mary (this is known as a ‘rann’, or ritual verse), reciting numerous ‘Hail Mary’s’ and ‘Our Father’s’ and ‘Creed’s’ before reciting the same at various points along the path through the lower sanctuary and up into the upper sanctuary before finally entering the well. 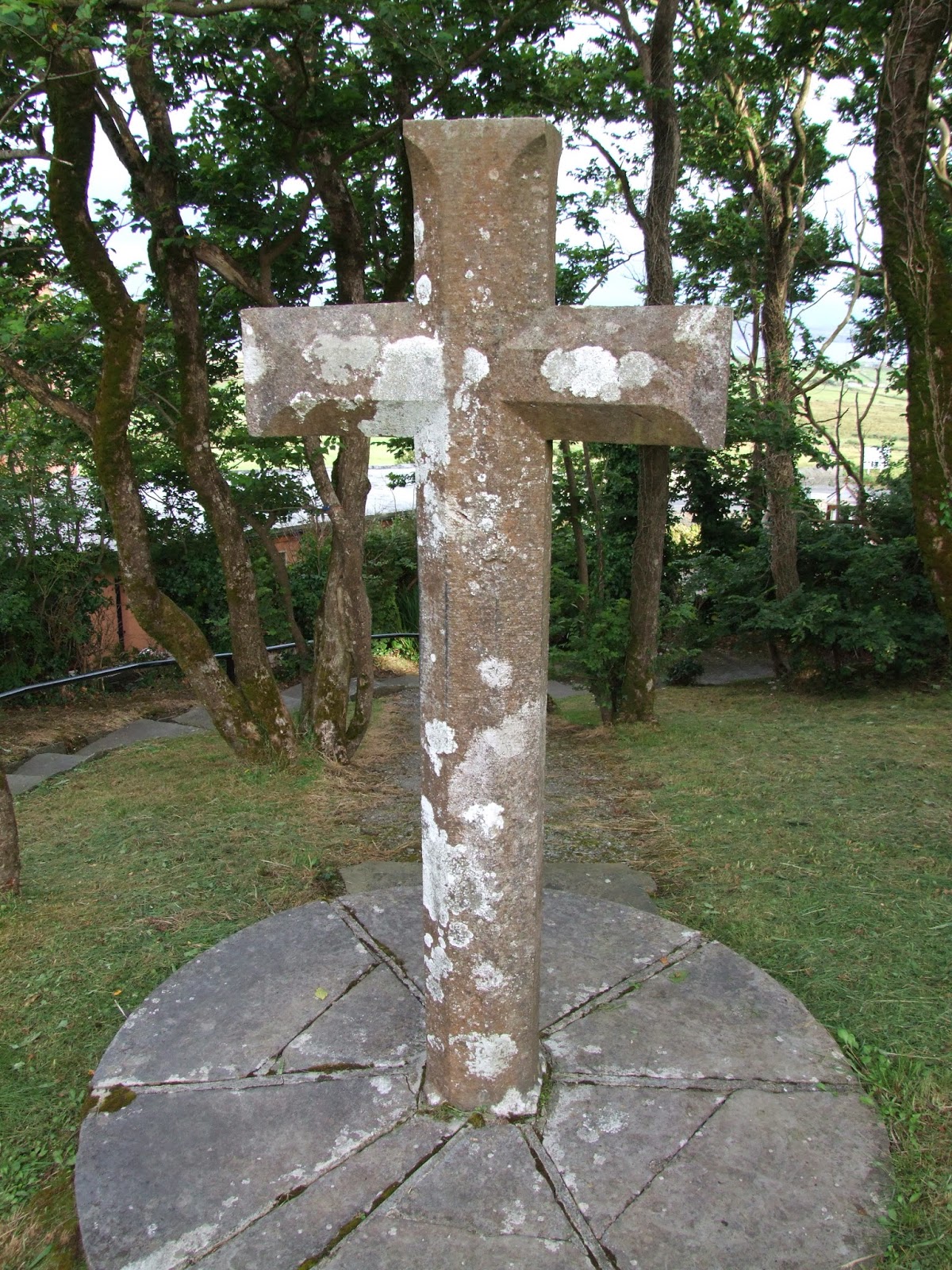 The cross in the upper sanctuary

The upper sanctuary is accessed by a small winding path that makes its way up through the trees to a stone cross that stands at the entrance to an ancient cemetery, said to be the burial grounds of the Kings of Dái gCais and containing the mausoleum of Cornelius O’Brien. Cornelius O’Brien was an interesting local character who was highly regarded in his day.  He was a solicitor for Ireland from 1811 and became magistrate for Clare. Despite being a Protestant landlord, local Roman Catholics held him in high esteem for his political stance in relation to Ireland and for his care of tenants. He took great care of his tenants houses, ensuring they were always in habitable condition and well maintained and clearly had a great love of the area. He ensured there was ease of access to the cliffs of Moher and paid for pathways to be maintained and the erection of seating, a viewing tower and a structure known as ‘the Round Table’.  In 1840 Cornelius fell seriously ill while in England and sent for water from Liscannor holy well which he promptly drank. Attributing his recovery to the healing waters he endeavoured to restore Saint Brigid’s holy well, which was in a state of considerable disrepair at the time, and he paid for its restoration and greatly encouraged devotion at the site. He returned to Ireland during the famine years and is said to have done all he could to provide food to the starving and later he established a national school for the area. However, like many landlords of the time he was not without a sense of self importance, ensuring that a prominent O’Brien monument would be permanently present at the well after his death and that locals would also remember his presence in connection to the well with his imposing mausoleum overlooking the entire cemetery. A short distance from the well there is another well by the road. This is not a holy well, but one that locals used for washing and gathering water for cooking and cleaning. Cornelius O’Brien created a stone housing for the well, topped by his crest. History was to be unkind to Cornelius as Ireland’s political landscape shifted in a way in which he might have approved of, yet set him squarely on the wrong side of the fence. Despite his own actions and political sentiment, his denomination and his national allegiance was to unfortunately tarnish his record in an area where dreadful atrocities were committed and whose people were unable to distinguish him any longer from the newly deposed ruling elite. 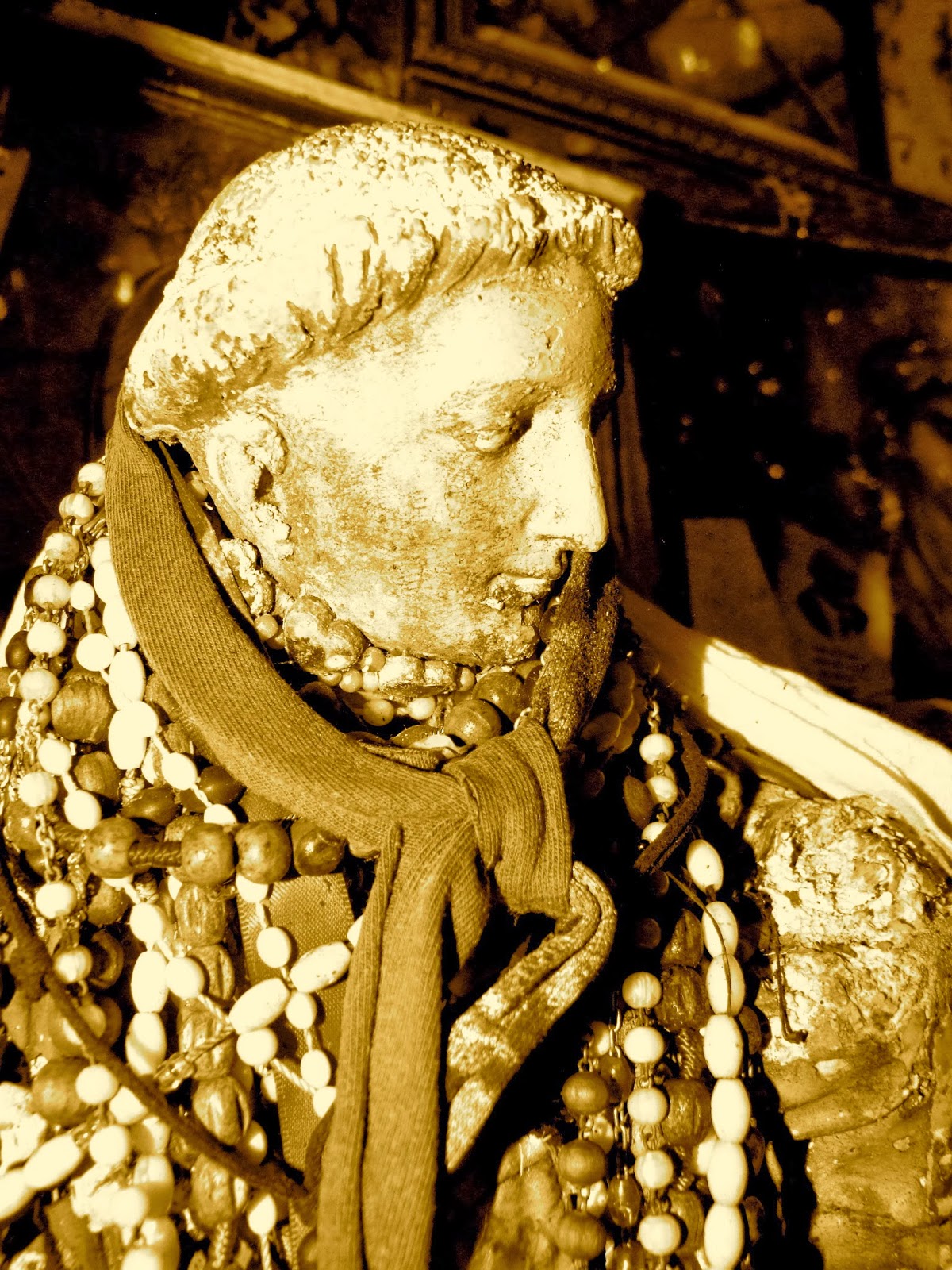 Saint Anthony, to help you find what you lost

It is not difficult to understand why this holy well is so popular, quite apart from the fact that it is on a very popular tourist route. It’s sheltered spot gives a sense of relief to the pilgrim and tourist alike with a feeling of shrouded mystery to its dark cleft leading to the well and its rambling graveyard. This is a place that undoubtedly rewards return visits, yet is best frequented early in the morning or a little later in the evening to avoid the throngs. 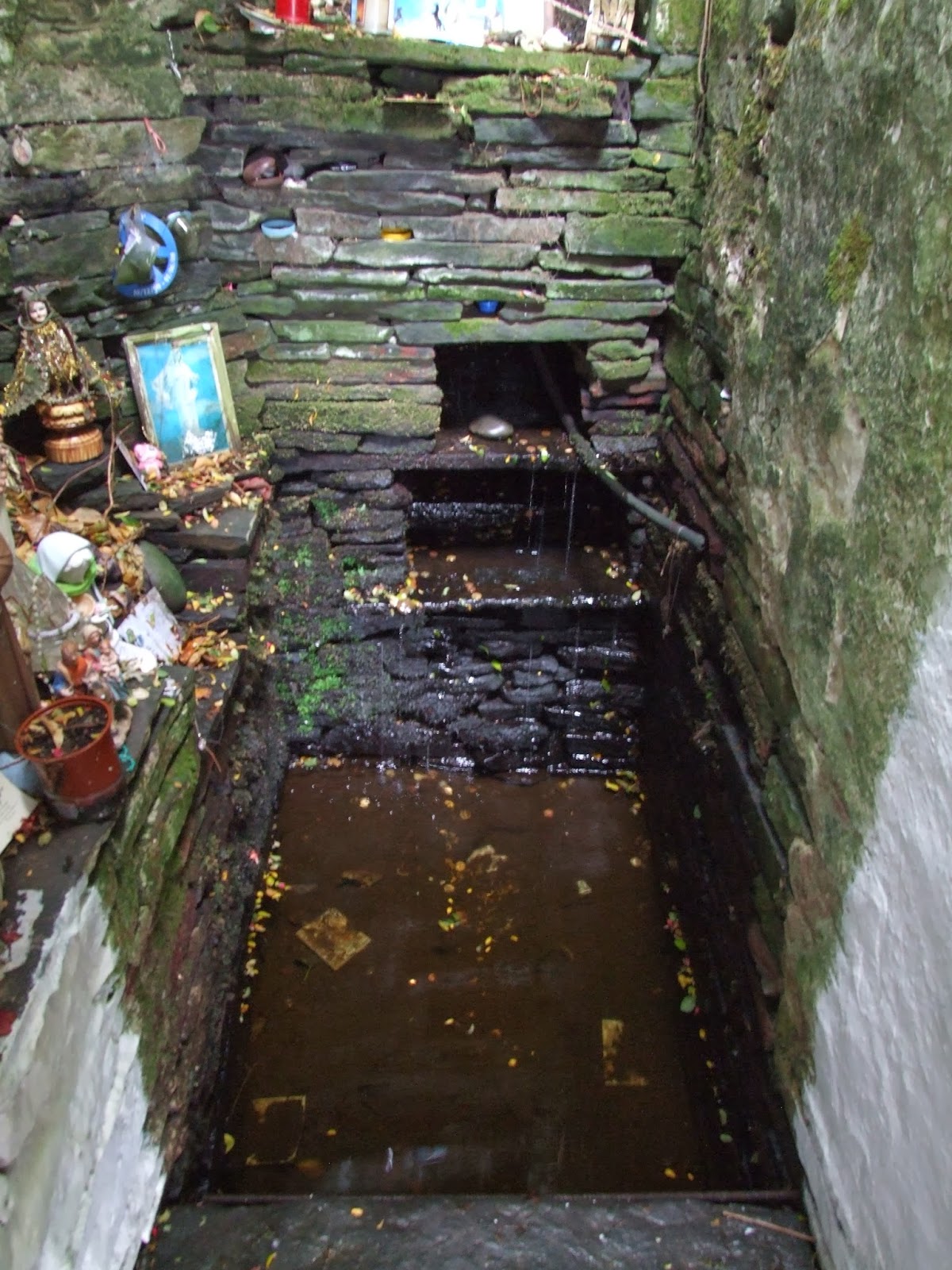 Rock of ages, cleft for me,
Let me hide myself in thee;
Let the water and the blood,
From thy riven side which flowed,
Be of sin the double cure,
Cleanse me from its guilt and power.

Nothing in my hand I bring,
Simply to thy cross I cling;
Naked, come to thee for dress;
Helpless, look to thee for grace;
Foul, I to the fountain fly;
Wash me, Saviour, or I die.

While I draw this fleeting breath,
When my eyes are closed in death,
When I soar through tracts unknown,
See thee on thy judgement throne;
Rock of ages, cleft for me,
Let me hide myself in thee. 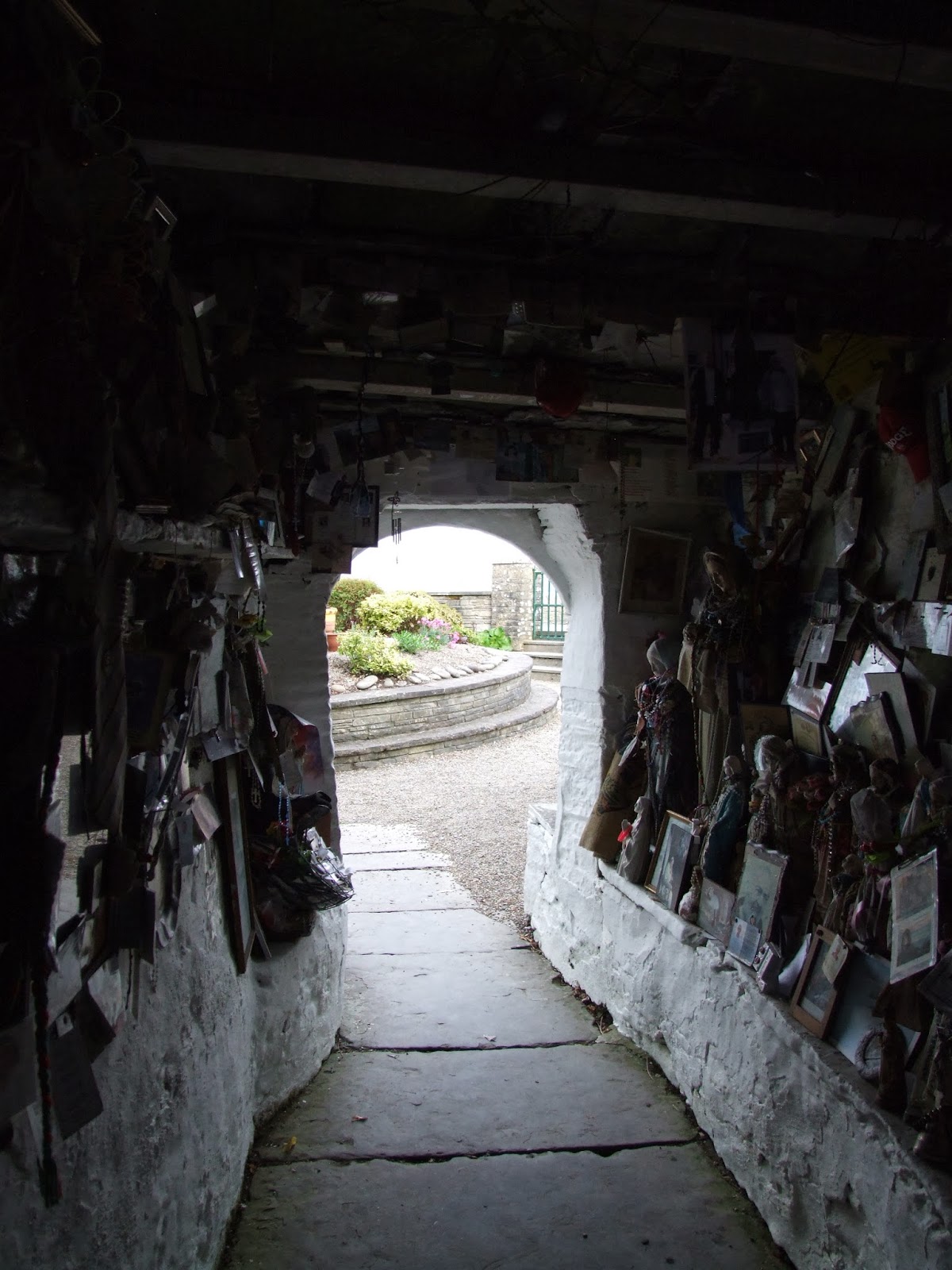 Looking out from the well

How to find it:
The well is impossible to miss! One mile down the hill from the car park at the cliffs of Moher on the right hand side you will see the statue of Brigid in her glass case surrounded by a low stone wall. 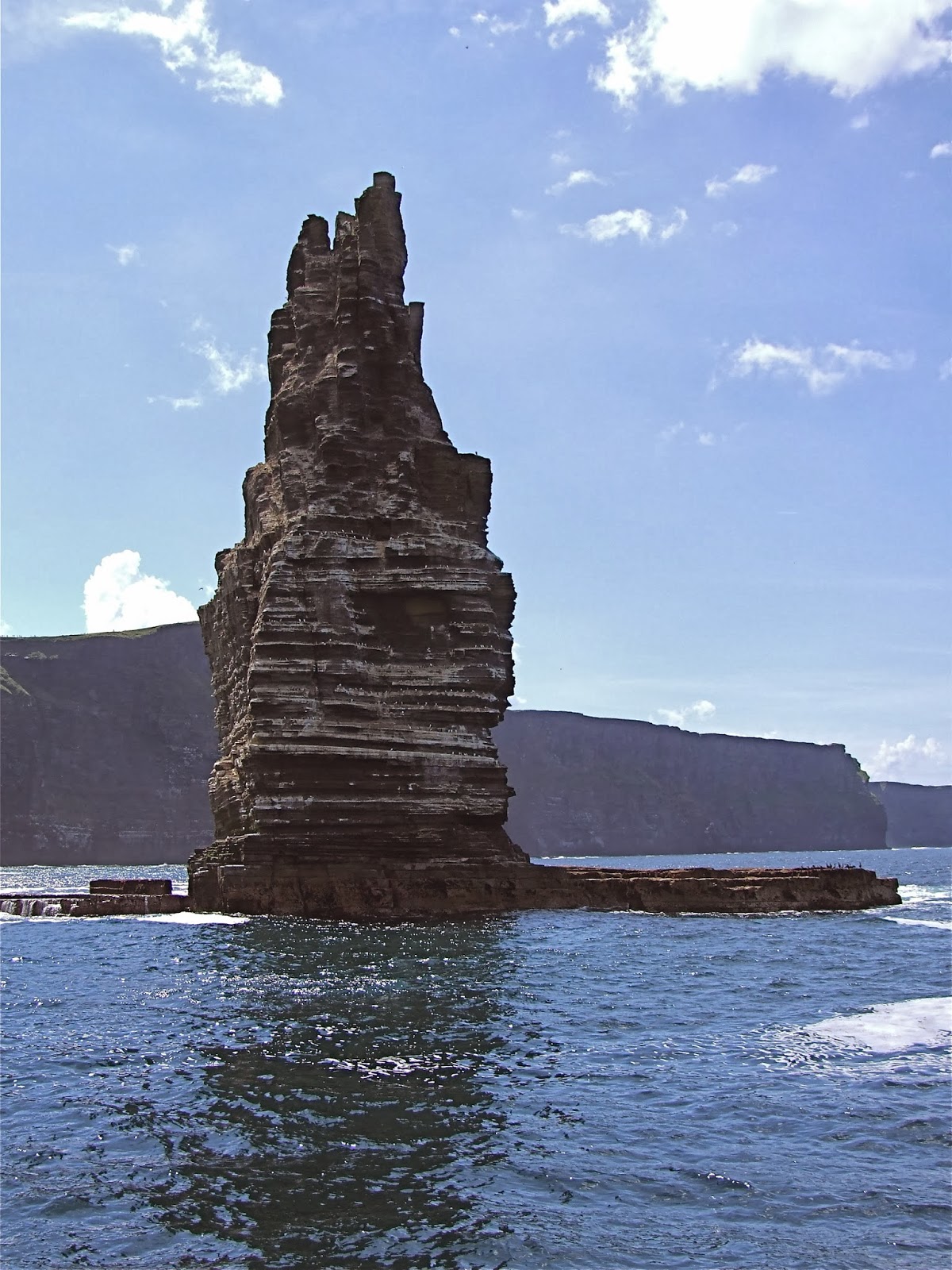 The Stack at the cliffs of Moher
Posted by Adomnán at 5:01 AM