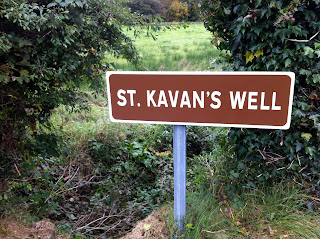 Nestling in the silent shadow of the Slieve Bloom Mountains, and by the meandering River Nore there remains but a few small signs of a significant monastic settlement that existed until the time of dissolution. Not far from the village of Coolrain, a small and beautifully cared for church oozes a certain Celtic austerity. It is the church of Ireland parish of Annatrim (or Anatrim) that was built in 1835 and it sits beside a now dilapidated structure that was an earlier church, possibly dating from around the early 1700’s that looks almost Spanish in style, and which also may incorporate some of the original monastic ruins. The Red Book of Ossory lists a church on the site as the Parish of Enahtrum in 1510, so it is likely that there was yet another earlier church built here too. Not far down the hill from the church lies the holy well of Saint Kavan. 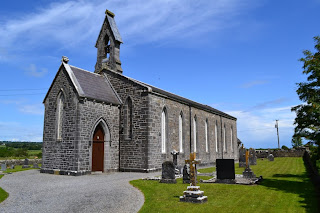 The Church of Ireland Parish of Annatrim

Annatrim, which from the Irish ‘Eanach Truim’, means the marsh of the Elder tree, and was the site of an ancient monastery. Up to the tenth century the River Nore marked the boundary between Leix and Ossory. It is said that Saint Mochaemhog was the first to establish the monastic site. We are told of this in the Annals of Annatrim Monastery itself, but of the life of the monastery (or in fact of any other detail relating to it) the annals are curiously silent. They tell us absolutely nothing; but this is not the only mystery which surrounds this site. 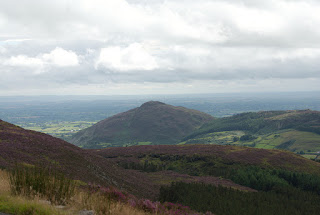 Saint Kavan (sometimes incorrectly spelt Saint Kavin) is an Irish nickname for the Welsh Saint Cadfan (Kavan in Irish meaning ‘wise man’, Cadfan in Welsh meaning Gideon, but in his day he acquired the nickname Kadvan which in Welsh means ‘warring wise’). It’s essentially a play on words - a very common practice in that early period of Irish Christianity. We don’t know a great deal about Saint Cadfan, but we do know that he was originally from Brittany and went on a missionary journey to Wales where he established two important important religious settlements. One was Tywyn and the other was Bardsey Island which he established in 516 and remained there as Abbot until 542. Bardsey Island settlement was to become one of the most important Medieval pilgrimage sites in all of Wales. It is a small island of three square miles, which offered some protection for the wars that raged on the mainland at the time. There are no records of Saint Cadfan ever travelling to Ireland, and certainly the religious site at Annatrim was only established about ten years after his death, so it would have been impossible for him to have had a hand in its construction and settlement. 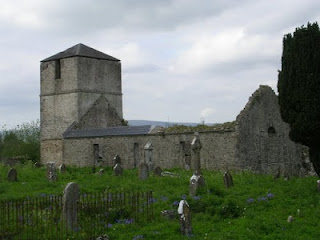 Bardsey Island is still considered to be a holy place of pilgrimage today and the  place of the burial of Saint Cadfan. Sadly in the nineteenth century the grave marker – which is an ancient stone with the earliest known written form of Welsh – was moved into a newly built church and those who moved it did not mark the place from whence it came! There are no records in Wales of Cadfan ever leaving Bardsey Island so there is a certain mystery as to why this Welsh saint would be commemorated in Annatrim – if that who is being commemorated there!. We know that there have been Welsh connections with Ireland and her saints before - such as the Welsh connection to Saint Aidan in Ferns diocese and the connection with Saint David in County Wexford, but this one is a bit of a mystery. It is possible that Saint Mochaemhog trained in Wales and was influenced by Saint Cadfan, but we cannot be sure and any suggestion of this kind can only ever be pure conjecture. It’s made more curious still by the pattern day that used to be celebrated at the holy well. On Bardsey Island there is also a holy well dedicated to Saint Cadfan and the day of pilgrimage to it takes place on the 1st November, but in Ireland the pattern to this well takes place on 3rd November, however this could be a transference from celebrating the day on either All Saints or All Souls Day – but there may be yet another explanation. 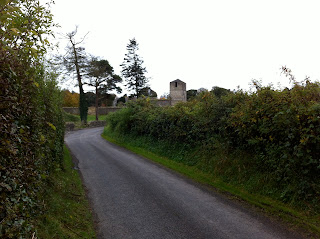 Looking up the road from the holy well

There is one other possibility, which is a bit of a shot in the dark, but it may shed some light on the mystery of the holy well. In a book entitled ‘Insula Sanctorum et Doctorum’, John Healy records a story of Saint Columba of Terryglass travelling with Saint Fintan, Saint Mocumin and Saint Caemhen of Annatrim.  There is an ancient legend that claims that Fintan was born in Annatrim, but there are little records of who Saint Caehmen of Annatrim was, as mentioned by Healy. In the tale the four travelers are searching for a place to establish a religious settlement. As they walk across the top of the Slieve Bloom Mountains they come across a boy who is herding sheep who has been dumb since birth. Saint Columba of Terryglass has pity on the child and making the sign of the cross over his mouth, the boy begins to speak and tells the travelers that it is near here that they will experience their resurrection, for it is here that they will remain until death. Saint Columba of Terryglass looks down from the mountainside and sees a great company of angels in the area of Clonenagh moving backwards and forwards preparing the ground for the great harvest that will take place as a result of their settlement. Saint Columba of Terryglass, echoing the words of one of the disciples at the event of the transfiguration, proclaims, ‘It is good for us to be here.’ It’s tempting to think that this long forgotten Saint Caemhen of Annatrim is in fact Saint Kavan, but again it may only be part conjecture. The annals of the original settlement are curiously silent and John Healy does not document the source of this tale of Saint Caemhen whose feast day is recorded in the nineteenth century as the 12th June by Colgan, but it is likely that it is a variant on a form that can be found in the Life of Fintan of Clonenagh. In that Saint’s Life, Fintan is said to journey with Saint Coeman of Annatrim. Variations of spelling are common in Ireland, and I’m not well versed enough in Irish names to know if Caemhen and Coeman might be easily interchangeable, but it all adds layers to the mystery of this area and it’s well’s dedication. It may be that the names of Saint Caemhen and Saint Kavan have become confused in a process of anglicisation and that the similarities between the name of Kavan and Cadfan are merely chance. In the Martyrology of Donegal Saint Coeman’s feast day is listed as 3rd November with the following entry; ‘Coeman of Eanach Truim, in Laoighis, in the west of Leinster. He was of the race of Labhraidh Lorc, monarch of Erin, and brother of Caoimhghin [Kevin] of Gleann-da-locha.’ It's hard to know why Coeman would become Kavan, but it's a intriguing possibility and probably the most likely possibility in light of the scant evidence. 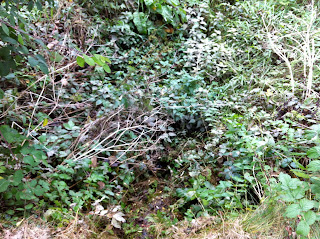 The holy well, barely visible beneath the brambles

A pattern day is supposed to be held at the holy well on the 3rd November, but it appears that this has not taken place since around 1830. The well is also said to have had a special stone, known as Saint Kavan’s stone, but it is in fact a large millstone, possibly from the old ruined mills that once dominated the village of Coolrain. The stone is a large flat flagstone with an incised circle, having two circular recesses cut into it on top and two rectangular recesses underneath. On the day I was there it was impossible to see anything. The well itself was barely visible through the mounds of weeds and brambles (a somewhat ironic symbol of it tangled history), and it was impossible to say if the millstone was still present. Despite it’s shabby appearance, the well is still marked and local people know of its existence, but with much mystery surrounding its dedication, it is likely that a pattern around it will never revive and sadly this well will probably only remain a curiosity. If on the other hand it were possible to untangle the Kavan’s the Coeman’s and and the Caemhen’s and finally settle on the listing in the Martyrology of Donegal, then a revival of the pattern and a remembrance of a forgotten Irish saint might just be possible -  but I fear that we might have to wait until something else is uncovered in terms of documentation to clear the entanglements up! 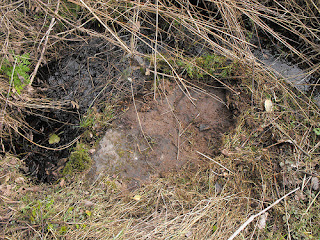 A picture of Saint Kavan's stone from days when the well was less neglected
Photograph courtesy of http://www.thestandingstone.ie


A Welsh blessing from a collection by Alexander Carmichael. 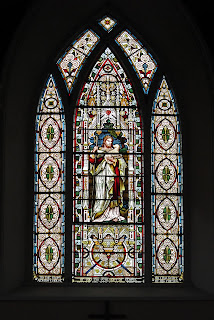 How to find it:
From the Church of Ireland parish Annatrim, walk down the hill away from the church and the church ruins and not far down you will see a large metal sign indicating the presence of the well.