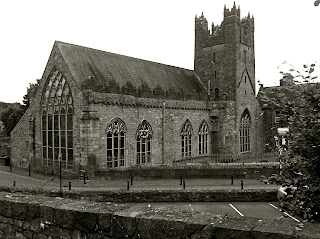 Sometimes you come across a holy well that has either little or no information about it at all except in the memory of those who live nearby. Angel’s well is one such example, but after a long search and quite a few questions, in early July of 2012 I finally found an answer from a quiet monk in the Black Abbey in Kilkenny city. 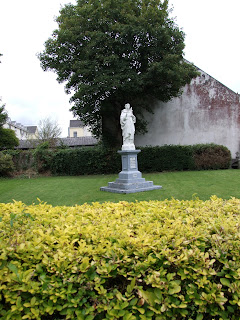 The Black Abbey is a curious place with a name that conjures mystery and a certain solidity. It’s hidden behind houses, down a little back road and surrounded by the typical Medieval meandering and narrow streets that one associates with Medieval towns and cities like Kilkenny. It was originally built through the generosity of William Marshall, Earl of Pembroke, in 1225. It’s original structure was of a simple and plain stone abbey in a standard abbey shape, but a tower was added in 1507. The interior aspect has changed, with the tower rising above what is now the sanctuary which would originally have been the long choir. The south aisle (which runs adjacent to the nave) is the entrance and the now shortened choir is now the sanctuary. It’s an odd orientation that doesn’t quite work and sadly it’s interior feels a little out of sorts and somewhat patchy, with furnishings that are modern and simple and yet for some reason still don’t quite fit. It’s not at all helped by the sanctuary sporting a modern stained glass window which I didn’t find particular beautiful and is far too dominant a force in the building. The Black Abbey has clearly suffered much, not least during the dissolution of the monasteries during the reign of Henry VIII when the abbey was closed for period and used as a court house. In 1603 however, the citizens of Kilkenny staged a minor coup, and seized the abbey to return it to the Dominican Order. The future looked bright, but then Oliver Cromwell came along with his forces and did what he was best at in Ireland -  he sacked it and tore down the nave. The rest of the church suffered in this sacking too and the abbey was finally completely restored (minus its original sanctuary) in 1860. 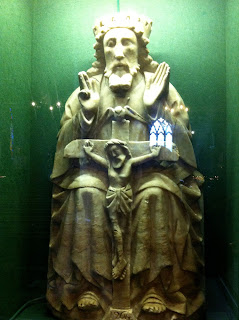 The carving of the Holy Trinity

There are some reasonable examples of Victorian stained glass in the abbey still, with a large impressive Rosary Window  (supposedly the largest stained glass window in Ireland) adorning what was the south transept (the north transept seems to have disappeared without trace; if there ever was one). Beside this sits an oddly un-orthodox carving of the Holy Trinity (the dedication of the abbey) in the sense that it has a figural depiction of God the Father complete with a beard in the style of an Irish chieftain! Although the carving is dated to 1264 at its base, various experts in the field have dated the carving to the later fourteenth century. Whatever the case it is remarkably well preserved for it’s age. 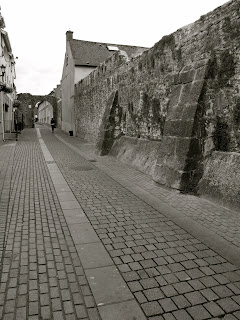 A medieval narrow street in Kilkenny

The outside of the Black Abbey is directly on a road, but in the immediate vicinity of the abbey walls you can see ten stone coffins lined up dating from the thirteenth century.  Across the street -  where part of the long choir and the sanctuary would have been - is a small railed off garden with the holy well in the top right hand corner. The Dominican Order settled initially in Dublin with Kilkenny being the third site of settlement. The abbey was so named due to their style of habit, with a black cloak or cappa worn over their cowls. Founded by Saint Dominic, they were established as an order of preachers, but quickly acquired the nickname of Dominicans; a play on words for Domini Canes, or ‘God’s dogs’ whose primary function was to rid the Christian west of the gnostic sects. As an order it has struggled to achieve it’s goals, having very limited success in combating the gnostic Albigensian heresies and consistently doing battle with paganism until a new battle line was drawn with humanism during the Renaissance. The order was most effective during the eighteenth and nineteenth centuries in that period of western expansion and colonialism when the Domnicans became galvanised in their teaching on human rights when they witnessed the brutal treatment dished out by colonialists to native peoples. Despite preaching and advocating a Gospel of equality for all people – a message deeply unpopular and resented by many at the time – the order experienced a revival by the end of the nineteenth century, which was probably fortuitous in the restoration of the Black Abbey in Kilkenny. 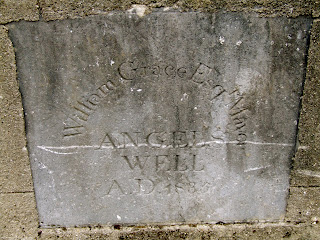 The dedication stone above the well

The original foundation had no water source and the monks had to travel up the hill out of the confines of the abbey to fetch water from Saint Canice’s well (called ‘Kenny’s well’ by locals). When an outbreak of bubonic plague hit the city of Kilkenny the monks knew that travelling backwards and forwards to the well each day was becoming a dangerous activity as many of the sick and infected were now permanently camped out around the holy well in hope of a cure. To avoid the spread of infection to the members of the abbey the Dominicans requested that a small channel be built from Saint Canice’s well to a deep trough in the grounds of the abbey to allow the monks to draw water without having to leave the abbey. The Bishop was said to have been greatly concerned at the effect this might have upon the level of water in Saint Canice’s well and did not want all the water to be drained to the abbey, especially in light of the many sick and infected who were gathering at the well to pray for a cure. Legend has it he finally relented to the request of the Dominicans by telling them they could build their channel so long as it was no larger than the circumference of his ring. The channel was built and the well housing made over the trough. Today the water from Saint Canice’s well still flows through this very narrow channel without any detrimental effect upon Saint Canice’s well up the hill. Over time popular devotion around the redirected well grew and it began to be treated as a separate holy well and even began to be called Angel’s Well; although nobody is quite sure why it was given this name. William Grace, the mayor of Kilkenny, erected a new well housing around it in 1885. 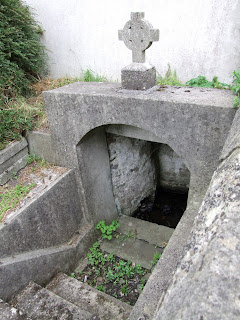 It’s not easy to get in close to this well as the garden area is often locked, although it is clearly taken care of very well. The well on the other hand is slightly neglected, with much silt and a few bits of rubbish. It’s a curious thing for a well to gather its own forgotten history, but the mystery of why it is called Angel’s Well will no doubt remain lost in the mists of history, but even if you can’t get in to visit this well you can always go up the hill to the source of the water in it!

Grant O Lord Jesus Christ, that I may persevere in good purposes, and in thy holy service, to my death; and that I may this day perfectly begin, for all I have hitherto done is nothing.
Amen.
A prayer from the Dublin Dominican Manual, 1913. 
How to find it:
The Black Abbey is now clearly signposted and sits on the corner of Abbey Street. The small railed garden is opposite and the well is in the top corner by the street.

Posted by Adomnán at 9:37 AM No comments: