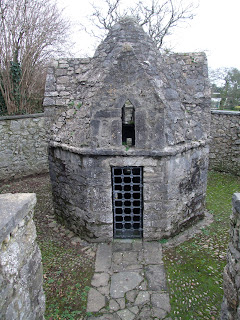 Malahide has been a populated area for a considerable length of time with remains of much prehistoric activity, then settled again very considerably by the Vikings in the late eighth century, before finally becoming a rapidly growing suburb from the 1960’s on. The village of Malahide has a holy well of its own on the old main street, dedicated to St Sylvester, but today it is covered up and there is no access. A pattern day used to be observed at this well in honour of the Blessed Virgin Mary on 15th August. 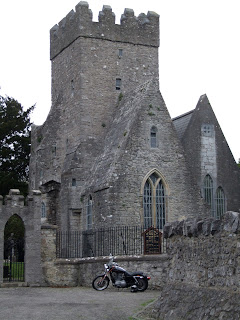 View of the Original Church with the Victorian Extension to the rear
The church of Saint Doulagh is a fair bit out from the village in what must have been an isolated area at one time and today is a marriage of a twelfth century structure and a Victorian chapel. As you approach the church the tower and the the front portion are the original structure, which includes a double stone roof, a few ‘cells’ and a couple of rooms of quite small proportions. It is possible that the two small rooms could have been a refectory and dormitory for monks that would have lived on site. Of the monks of the twelfth century we know nothing, but there is some evidence that the site was used continuously by Christian communities dating back to the time of Saint Patrick and it is with a saint closer to Patrick’s time that we will concern ourselves with here. 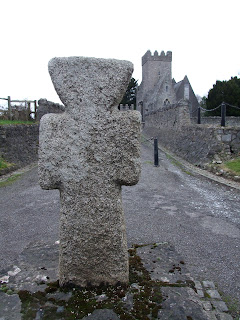 Saint Doolagh (Doulagh in the church spelling, Dúileach in Irish) was an anchorite living on this site. At the church there is the twelfth century structure, the newer church, an ancient baptistry (outside) and a pond or well. Engravings from the eighteenth century show a stone circular structure to the front of the church and close to the baptistry, but no trace of this now remains. Inside the twelfth century structure of the church, one of the rooms incorporates a tomb, which throughout it’s history has been understood to be the tomb of the saint. The anchoritic life was one of the earliest forms of Christian monasticism, common among early Christians throughout the Middle East, most famously in Egypt. It was an extreme lifestyle of little comfort, constant prayer, minimal food and water and intense concentration. It was carried out in solitude where possible with a considerable focus on the importance on the Eucharist as the principal act of worship. While there is evidence that the anchoritic life was fairly common among early Christians in Ireland, it was curiously not the case in Britain, which did not see the rise in popularity of this charism until the late Middle Ages. Saint Doulagh’s life must have been hard, unrelenting in it’s challenge and fraught with a certain danger too. 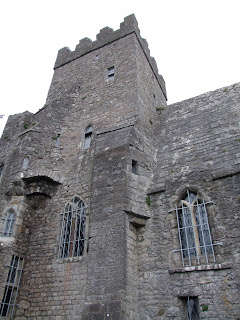 View of the church

Very little else is known of Saint Doulagh. He appears in the ancient Calendar of Christ Church Cathedral as ‘Episcopus et Confessor’ (Bishop and Confessor) and his patronal day is listed as the 17th November (although this may be a change from an original festival date of 1st August). He features hardly at all in any other hagiographical literature in Ireland, or indeed Europe. His lineage is preserved in various documents and some documents speak of his ‘bed’ being a place where pregnant mothers would lie and say prayers for a safe birth. His history (in the form of a Saint’s Life) was said to have been preserved at the site up until the seventeenth century when it was destroyed, an event that might have corroborating evidence in the destruction of the baptistry too. Despite his obscurity now, he must have been famous even in his day, as he is listed as one of the saints invoked in the ceremony as a guarantor of the Law of Adomnán. 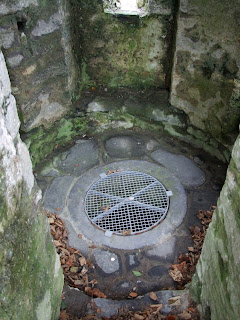 The holy well is in the middle of the only exterior and detached baptistry in all of Ireland. It is a large circular hole in the centre of an octagonal structure with a pool to the rear. The well is sadly dry, some citing the expansion of the nearby road as the cause, but recent reports suggest that after two horribly wet summers that water has surfaced! The well originally drained out into the pool to the rear, known as Saint Catherine’s pool. It is thought that the baptistry was for the baptism of boys, whereas the pool was for the baptism of girls, but it is more likely that the pool is for adult baptism by full immersion. The baptistry was plastered and decorated by a local resident (Peter Fagan) at great expense in 1609, with fresco paintings of Saint Patrick, Saint Doulagh, Saint Brigid and Saint Columba, with a central overhead fresco of the descent of the Holy Spirit upon the Apostles. A large marble plaque also bore the inscription: 'Bethesda's sacred pool, let others tell, with healing virtues, let her waters swell. An equal glory shall Fingallia claim, not be less grateful for her blissful stream. Thy prayers, Doulachus, mounted up to He'ven, thence to thy will the mighty power be given, to drive the fiery fever away. Strength to replace and rescue from decay, in every malady a life to stay. The cherub, wondrous, moves his wat'ry sphere. The Saint beholds, who stirs the fountain here. Hail, lovely fount! If long unsung thy name, it thence shall rise above the starry frame.' Sadly, these were all completely destroyed  by Sir Richard Bulkeley of Dunlavin on his return from the Battle of the Boyne, and it is possible that he destroyed the Saint’s Life at the same time. 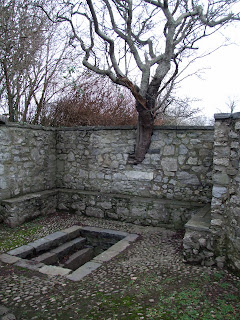 The pool of St Catherine

The site also contains a small granite cross in a latin type shape with flayed edges. The stone is not native to the area and must have been brought in from elsewhere, possibly as part of another site. Dating the cross is somewhat difficult, but it is possible that it dates to the period of the original church and monastic settlement that still exists as part of the church today. Despite the dryness of the well, a patronal service for Saint Doulagh is still held today along with ecumenical gatherings, but no pattern has been observed here since the end of the eighteenth century. 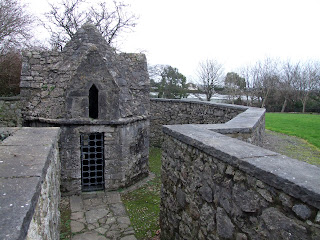 View of the baptistry

Lord Jesus Christ, Son of God, have mercy upon me.
The Prayer of the Heart in the Orthodox tradition
(dating back to the Desert Fathers.) 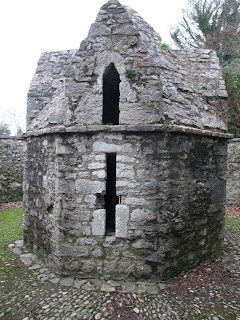 To the rear of the baptistry

How to find it:
This is an easy site to find. Travel up the Malahide Road (R107) and you will see the church on your left. The cross stands at the entrance and the baptistry is to the right of the church.
Posted by Adomnán at 11:41 AM No comments: