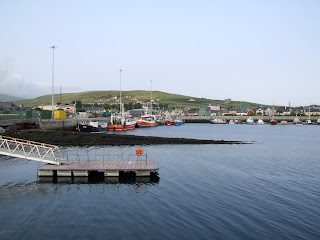 
Díseart in Dingle sits in the centre of the town; a former Presentation Convent, now a centre of Celtic Studies to promote the Irish language, culture, archaeology and the arts. Dingle (or An Diangean Uí Cúis -  meaning town of the fort) was formed as a port town in the mid to late twelfth century during the Norman invasion of Ireland and by the thirteenth century was a thriving town with a huge amount of exports leaving through the port that rivaled other nearby cities. By 1569, Dingle was one of the fifteen or so towns given the monopoly on the importation of wine to Ireland. The town was also greatly helped in its development and wealth by the strong connections with Spain; this was considered to be the port to leave through if you were making the pilgrim journey to Santiago de Compostela. This link was further cemented by the local church being dedicated to Saint James. However, by the end of the sixteenth century, Dingle's fortunes began to turn. The town was sacked and burned a number of times and trade began to dry up. For a short period the linen industry looked like it might turn around the misfortunes of the town, but by the 1830's the industry that held so much hope for many simply ground to a halt. The famine years were most unkind to Dingle and were compounded by a terrible cholera outbreak which threatened to destroy the town completely. By the end of the nineteenth century its fortune revived as the fishing industry brought it new life and the birth of tourism in the mid twentieth century has ensured its survival and prosperity ever since.

Dingle is small and beautiful town with much to do and see. In the high season as many as twenty thousand people can pass through the town in any given week, taking boat trips in the hope of seeing Fungi the dolphin or to the Blasket Islands, or touring around the area to see the many archaeological sites, the beautiful scenery or to climb Mount Brandon. In the centre of the town sits a large Roman Catholic Church dedicated to the Blessed Virgin Mary, built in 1869. Beside it is the neo-Gothic structure Díseart. 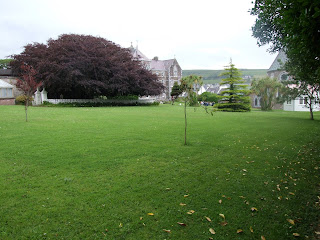 A view of Díseart from the gardens


Díseart is a large and imposing building and a former Convent of the Presentation Sisters which includes a chapel dedicated to the Sacred Heart and surrounded by grounds which have been transformed into gardens representing the Tree of Life. The chapel is part of the main building on the second floor. Originally it was somewhat plain, but under the direction of Mother Ita Macken in the 1920's it was refurbished to create a truly wonderful space. At a cost of £1000, she commissioned Harry Clarke to produce a set of six windows depicting the life of Christ. Sadly, photographs are not permitted in the chapel (although I did sneak one!), but the Harry Clarke windows are truly very impressive. Like much of Clarke's glass it is very difficult to photograph because of the intensity of colour and changing light. It's always better to see them in person to truly appreciate their beauty and depth.

Detail of the Adoration of the Magi


Díseart also houses a set of modern fresco's by Colorado born artist, Eleanor Yates. I can't say I'm a fan. Some find them inspiring and beautiful, but personally I found them gaudy and a bit overpowering. They depict the life of Nano Nagle, the founder of the Presentation Sisters in 1775. Nano Nagle was born in Cork and sent as a child to be educated in Paris. From a wealthy Catholic family she enjoyed the opportunities of a good education, but even while in Paris she noted the plight of the poor and their lack of education. On returning from Paris she lived with family for a while in Dublin, but after the death of her parents and her sister in quick succession she joined the Ursuline
Convent in Australia. Here she became convinced that her services would be better employed in the service of her own people in Ireland, where many suffered educational and financial poverty due to the enforced penal laws. On her return to Ireland she set up her first order dedicated to the Sacred Heart which later became known as the Order of the Presentation Sisters. Her first school for the poor was established in Cork city and soon she had a collection of seven schools throughout the city dedicated to the education of the poor. Nano was tireless in her efforts and was often criticised for neglecting her own needs and her own health. Finally, her over worked and stressed body gave up and she collapsed on Cross Street in Cork, dying soon after in 1784. Her life was to continue to inspire many people for decades. Her schools still exist and provide education for all and her order has spread throughout the world, still having a concern for, and working with the poor and needy. 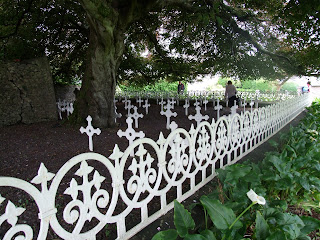 
The holy well in Díseart grounds was neglected for a long period of time and pretty much forgotten about. Some sources indicate that it was dedicated to the Blessed Virgin Mary (which would make sense with a church of the same dedication and residing in a Presentation Sisters Convent grounds), while others suggest a dedication to Saint Peter, which would certainly be unusual in Ireland. Whatever the case, the true dedication of the holy well was forgotten. It was a very deep well and today, little or nothing of its original structure survives. In fact, it as only very recently rediscovered. In 2009 a celebration of Nano Nagle's life took place at Díseart, and the well was fully restored. After a mass in the chapel, and during a reception in the gardens, Monsignor Pádriag Ó Fiannachta blessed the newly restored well and dedicated it to Nano. The restoration has been done well, but access to the water is impossible. 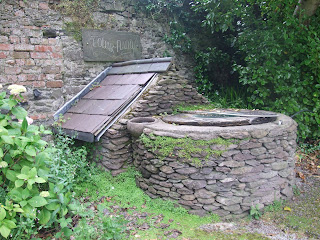 
The grounds around the former convent are beautiful and well worth a visit. There are places to sit and be quiet and still in lovely surroundings, along with groves of trees and winding paths away from all the hustle and bustle of the town. The large tree at the top of the gardens holds some clouties. The Catholic Church of Saint Mary next door to the convent is also worth a visit. It is quite plain inside by comparison, but presents a still and peaceful spot. 
Loving God, you made us in your image. Forgive us when we we fail to see your image in each other, when we give in to greed and indifference to the world's poor and needy, when we do not question the systems that are life-denying. As we are made in your image, let us live in your image and be Christ-like, in service, endurance and love.
Amen. 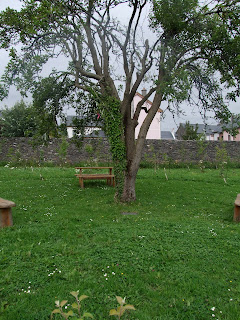 The tree at the top of the gardens


How to find it:
Díseart itself is easily found in the town of Dingle. From the old convent, head up the left hand side of the gardens and the well is about half way up against the wall. It's hard to miss -  it has a large slate fixed above it which reads, 'Tobar Nano'.