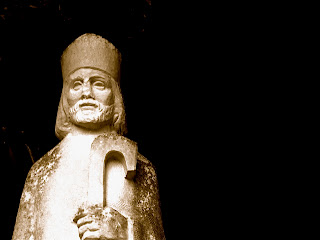 The statue of Saint Patrick

Saint Patrick’s well in Clonmel is one of the largest - if not the largest of all holy wells in all of Ireland. It is situated at the bottom of a long set of winding steps, shaded by a few trees in a small glen. As you approach it, the waters from the well flow into a large and shallow pond with an ancient Irish stone cross set upon a small island in the middle. It is thought that this cross dates to the fifth century. For such a large holy well and surrounding site, it is amazing just how little is actually known about this area, but it is thought that Saint Patrick passed through here and may have used this place to bathe or to baptize. 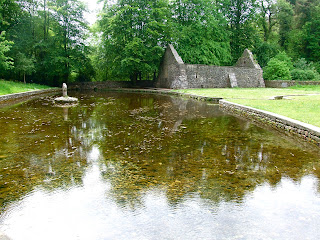 Overview of the site

It is a beautiful setting, full of greenery, the sound of flowing waters and a stillness enjoyed by many insects and butterflies. Coming down the steps to the site is a stone statue of Saint Patrick. He is rather fine - not at all tacky as these things often are and he has a statuesque authority about him, yet a certain kindliness too that is present in this whole place. The statue was erected by the Saint Patrick’s Day Society in 1958. It’s unclear where it came from - which is something of a shame, because there are numerous Saint Patrick’s Day Societies all over the world; most notably in the United States of America and they are noted for their promotion of Irish culture and heritage. In this instance, it is most likely the Saint Patrick’s Day Society of Clonmel, but without a statement to that effect it’s impossible to say with certainty. 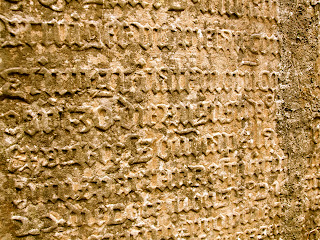 Detail from the tomb of Nicholas White

The lake or pond, with the cross on an island creates a beautiful focus for the entire area. It is very peaceful and still and although there is almost always a steady flow of traffic with visitors and people collecting water from the well, it never feels crowded or noisy. On the other bank is a small church restored in  1969 with the generous help and support of Mr Sam Yorty (a colourful Mayor of Los Angeles who got the nickname of ‘travelin Sam’), a Mr Armand Hammer (an American business tycoon) and the Irish Israeli society of South California (which I think was an Israeli ambassadorial charity of some kind). The restored church incorporates the highly decorated tomb of Nicholas White of Clonmel who died in 1622 and it also has some finely restored Norman arches. 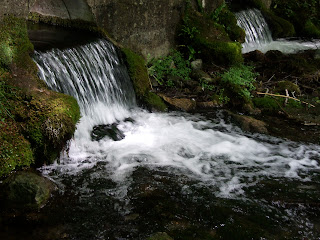 The water flowing out through the boundary wall

Around the whole perimeter of the site is a low stone wall, and although it is in no sense overpowering, it nevertheless manages to create a sense of enclosure and the creation of a very beautiful and peaceful space. Around the edges of the wall are small plaques with numbers to indicate where people may wish to observe the stations of the cross. In many ways this site feels like a very early Irish monastic settlement (even though it wasn’t - the area was a Cistercian settlement, probably established around the fifteenth century) with the circle around the cross in central position, the circle of the lake and the circular delineation of the outer wall. Overall, whether this was intentional or not in the design, it is a site that has been well conceived and whose restoration has been beautifully executed. Those who are responsible are to be commended for they have created a site of great beauty and stillness. 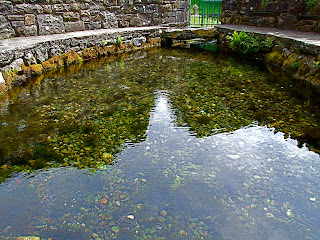 The well itself is set within a stone enclosure and it has a small gate for access (sadly locked when I visited). The waters quite literally bubble up through the limestone beneath into a gravel bottomed pool. It fizzes with life, and overflows through two stone culverts into a ‘Y’ shaped channel before flowing out into the large pond with the cross in the centre. At the head of the well is a simple, but very nice plaque of Saint Patrick. 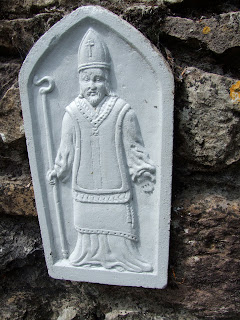 Tradition has it that this place has been associated with Saint Patrick for a very long time and a sign with some tourist information indicates that people have observed rounds here and stations of the cross from the time of Saint Patrick. Part of this is of course complete fantasy - stations of the cross or ‘way of the cross’ were not used in any churches until the establishment of the Franciscan Order as a means of enabling the poor to make a ‘spiritual pilgrimage’ to Jerusalem. Rounds on the other hand, would certainly have been observed, even if in a very simple way to invoke the protection of the Trinity. Despite the fact that the stations would likely not have been observed here to any great degree until more recently, it seems as good a tradition as any to observe in a place where the cross has central place. The Tripartite Life tells of Saint Patrick’s practice of crossing himself in the name of the Trinity hundreds of times each morning and evening, and if he knew that a stone or wooden cross was nearby on the roads he travelled, he would always make a point of stopping to pray at it. Despite it’s business, this is a good place to pray and an easy place to do so. Sometimes there are places that are described as ‘thin places’, where the presence of God is keenly and easily discernible or the veil between heaven and earth seems remarkably thin – this is one such place. 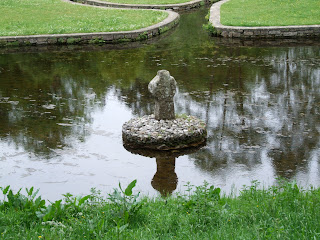 The cross in the lake

In this place where the cross has a central place, you may wish to observe the stations or you can say Franciscan Cross Prayers (a sort of mini stations!) outlined below. 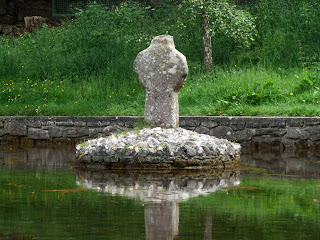 +In the name of God; Father, Son and Holy Spirit. Amen
We adore you O Christ, and we bless you
Because by your holy cross you have redeemed the world.

+Holy God, Holy and strong, Holy and immortal, have mercy upon us.

Almighty Father, look with mercy on this your family for which our Lord Jesus Christ was content to be betrayed and was given up into the hands of the wicked and to suffer death upon the cross; who is alive and glorified with you and the Holy Spirit, one God, now and for ever. Amen.

+May the life-giving cross be the source of all our joy and peace. Amen
Let us bless the Lord
Thanks be to God 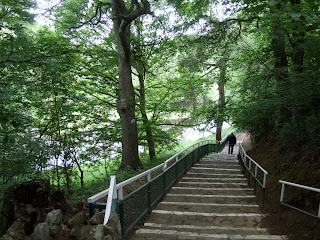 The steps down to the site

How to find it:
From the Dublin to Cork motorway, take the last exit for Clonmel to the left and halfway from the motorway to Clonmel town you will see clear signposts for the holy well to the right. 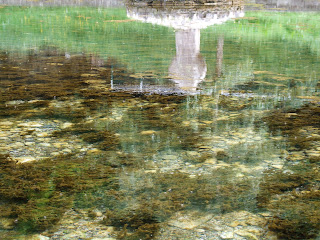