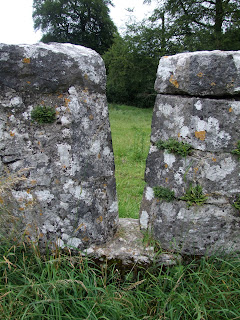 The stone gate to the old church

Saint Fiacre is a man shrouded in myth and legend, yet the very fact of the huge measure of devotion to him down through the centuries speaks clearly of his well-won reputation as a holy man. We know with some certainty a few facts of his life from the ‘Matryology of Donegal’, but there are many stories connected with him which are often tales only told to try and explain some of the seeming contradictions of his life. During his life Fiacre attracted many followers and those who would either try to emulate him or who felt that living close to him would inspire and encourage them also in their pilgrimage through life. One such example was Saint John of Valois, whose devotion to Fiacre led him to build a great hermitage close to the dwelling of the Saint at Breuil in France. Saint Vincent de Paul, the Apostle of France, made a regular pilgrimage to the shrine of Saint Fiacre. Devotion to the Saint continues to this day in France. Archaeological finds attest to his significance for French pilgrims who at one time attached small metalwork badges of the shrine of Saint Fiacre to their clothes. Fiacre is also depicted in many illuminated Breviary’s, most often with a spade in place of a staff. 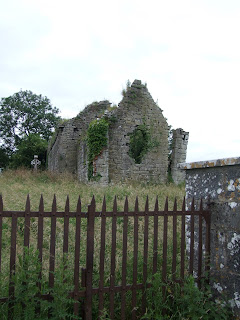 In Ireland Fiacre began his life as a seventh century hermit or anchorite and is also said to have served as a priest for some time. His Irish lineage was impressive, stemming as it did from Conn, King of Ireland from 523-577. Fiacre is believed to have been born around 590. Even in early youth he was noted for his generosity towards the poor and less fortunate and later he was to become famous for his wisdom and judgement in all matters and for his skill in working with the land - hence his association as the patron saint of gardeners. Although he served the people dutifully, his true desire was for solitude and prayer and he retired to a small patch of sheltered woodland on the banks of the river Nore where there was a fertile plain and a deep well with fresh, safe water known today as Kilfera (Cill-Fiacre). Here he could live out his days in peace…or so he thought. 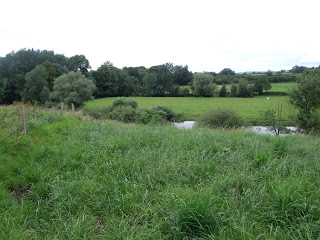 The fertile banks by the river

Over time the people learned of his small hideaway and they began to pester the Saint, looking for advice and his blessing. Seeking solace in Ireland was going to prove impossible and so the saint made an appeal to Bishop Faro in France for a small portion of land for him to live on. The Bishop granted this request and Fiacre moved to the area, close to the town Saint-Fiacre in Saint-et-Marne as it is today. Oddly enough, within a relatively short time Fiacre seems to abandon his anchorite calling and instead he begins to adapt the land given him by Bishop Faro for passing pilgrims and seekers. On the land he creates an oratory for prayer, dedicated to the Blessed Virgin Mary, a garden for reflection and quiet and a hospice where passing pilgrims could stay. There are various legends that attempt to explain why Fiacre abandons his desire for solitude, but none are very satisfactory. 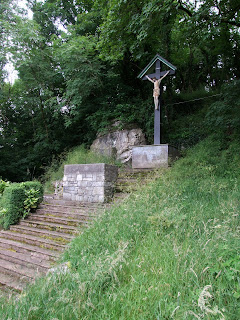 The crucifix and stone altar

Over time the hospice for pilgrims attracted many thousands of people each year who were seeking a place of prayer and intercession and peace. Fiacre encouraged them to live meager and self-sufficient lifestyles and taught skills of gardening and land management. In 670 Saint Fiacre died at the site in France and his remains were moved to Meaux. In Ireland Saint Fiacre is best known for his interventions during the Tithe War when many farming families were left with no means of income and no food. Fiacre is said to have brokered a deal on behalf of the locals which resulted in the return of their cattle. One story tells of this in typical Irish fashion: the people of the area gather at the site of Saint Fiacre’s well and implore him to help them after their cattle have been raided. Before the cattle can even make it as far as Ballytiglea bridge near Borris, Fiacre prays for their safe return and a swarm of bees appear and drive back the cattle to the area at such speed that the cattle raiders are unable to stop them. A song regarding this miracle is still sung in the area to this day (St Fiacre and the Bees, written by J.Norris). Despite the typical ‘tongue in cheek’ story, there may yet be some truth in it. Nobody knows exactly what deal Fiacre brokered that was satisfactory during the Tithe War, but maybe it involved honey or bees from a hive? 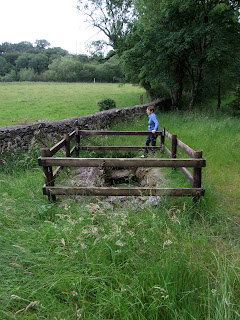 Saint Fiacre’s well is today at the base of a large set of semi-circular steps that has a small stone altar and large crucifix at the top. It looks over a large flat plain and is surrounded by a wooden fence. On the day I visited the local people hadn’t started clearing the area in preparation for the pattern so it was a little overgrown after a long wet summer. The well water was also full of a slimy weed that made it look fairly unappealing. Nevertheless, I could see the ancient stone structure of the well and I could see that it was also extremely deep.  The entire setting of the well and shrine is very beautiful. It is amazingly difficult to find, hidden in a dip and behind a bank of trees. 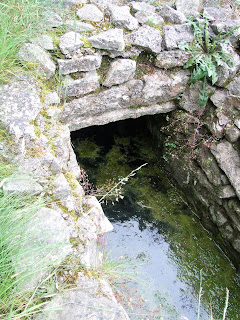 The deep well with stone surround

The pattern in honour of Saint Fiacre lasts rather a long time; from 15th August until 8th September. On 15th August, pilgrims gather on the banks of the River Nore and walk to Saint Fiacre’s ‘bed’. The present construction around the site with the steps, altar and crucifix was completed in 1930/31. The pattern began to be less and less observed until it had almost completely died out in the 1950’s and 60’s, but a few loyal local people kept the faith and devotion to the local saint and today the pattern has revived again. In 1992 a new parish church was opened in the area by Bishop Forristal and the dedication was to Saint Fiacre. There is a church ruin near to the site of the Saint’s retreat on the banks of the river which also bore his name. Today it appears to be a ruin that may have dated to the early Georgian period, but it is difficult to be sure. It replaces an old Medieval site and the graveyard houses a stump of stone said to have been a tall stone carving of Saint Fiacre that was destroyed by Cromwell’s men. I searched for the stump, but the graveyard was badly overgrown and there were many stone stumps! 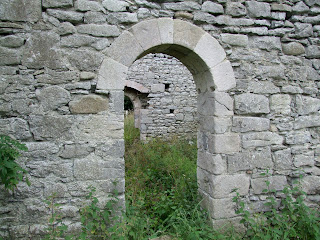 A stone arch at the church

The well water is holy by association to the saint. There are no records of anyone being baptized in it - although it is surely deep enough – and no accounts of it being blessed by the saint or having anyone experience healing of any kind. Local people had a curious tradition of bringing small bottles of the water from the well onto ships as a kind of talisman for protection. In the past, those who left Ireland to make the journey into Europe or to the America’s often travelled with a bottle of water from a holy well near their home, possibly as a reminder of where they had come from. There is however a story of Captain James Casey who was a native of Graignamangh, who on a boat journey home in 1775 hit a terrible storm and began to fear for his life and that of his crew. In a panic he invoked the saints help and the storm subsided enough to allow them a safe journey home. As an act of thanksgiving he presented a large processional cross to the church in Graignamanagh which you can see to this day, and this tale may explain why some travelling by sea took a small bottle of water with them from Saint Fiacre’s well. 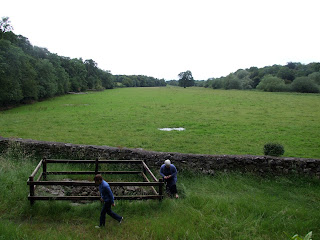 The view from the well over the plain

Hear us O Lord as we visit this retreat of your confessor Saint Fiacre, that inspired by his work and witness we may express a hospitality and peace that befits our faith; through your Son Jesus Christ our Lord, who with you and the Holy Spirit, lives and reigns, one God, now and for ever.
Amen. 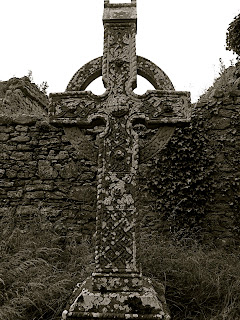 How to find it:
From Kilkenny city take the N77 and from this road take a right turn onto a narrow boreen which goes in a loop around an old estate. In sight of the church ruins, cross two fields and down into the small hidden dip where the well is.