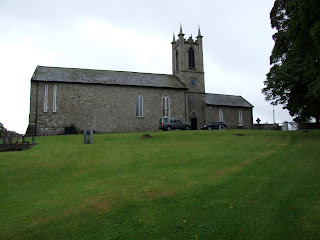 View of Saint Edan's Cathedral from the well


Ferns in County Wexford would be a sleepy little village if it were not for the fact that a main road runs through it.  In many ways it could be a very peaceful and beautiful village, but the sheer volume of traffic that runs through it constantly destroys any possible sense of peace. Admittedly it is not the ‘bottle neck’ that it once was.
Ferns is a village that is built upon an old iron age settlement. An archaeological dig in 1999 found a ring ditch that had been in use between 2000-500BC. It had a number of burials too, but interestingly it had a significant quantity of amber, some of which had been worked into beads and jewelry. This amber would have come from Scandinavia, so the iron age people of Ferns must have had trading links of some kind with them. It was to later become a very significant settlement when the resident King of Lienster (Dermot McMurrough) brought the Normans to Ireland to help him in warfare in 1169. The village was once dominated by an imposing Norman Castle. Part of the ruins of the castle survive and you can enter one of the southern towers. It dates from the late Norman period in Ferns and from the top of the tower you can get a magnificent view over the village and the surrounding countryside. 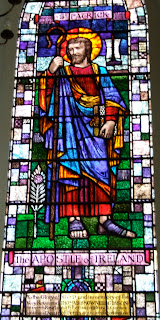 Stained glass window of Saint Patrick in Saint Edan's Cathedral by Catherine O'Brien
There are two large churches in Ferns. The Roman Catholic church of Saint Aidan was built in 1974.  It’s hideous both inside and out, but particularly on the outside as it’s modern jarring architecture sits with nothing else in the village. It is a great carbuncle on the fair face of Ferns.  The Cathedral of Saint Edan (Church of Ireland) has a certain charm from the outside, but inside its only redeeming feature is a magnificent window of Saint Patrick by Catherine O’Brien. Other than this window, it is a dull, lifeless barn and hardly seems a fitting resting place for such a significant saint. If you want to see something truly beautiful and inspiring, go and visit the Pugin Roman Catholic Cathedral of Saint Aidan’s in Enniscorthy. The Church of Ireland Cathedral site is however, important. The Cathedral, said to be the smallest in Europe, stands on the site of a thirteenth century cathedral site. You can still see some of the ruins of this cathedral at the east end of the existing building. Not far from these ruins are another set of ruins from an old Augustinian Abbey called Saint Mary’s. This was originally built by Diarmuid MacMurrough  (who is buried in the adjoining graveyard) in 1158 for ‘the health of my soul and my ancestors and successors’. Presumably he was referring to his allowance of beer from the Abbey as the original charter gives him a significant claim of entitlement to a portion of all beer brewed there. The entire area sits on the large settlement of Saint Aidan’s original sixth century monastery. 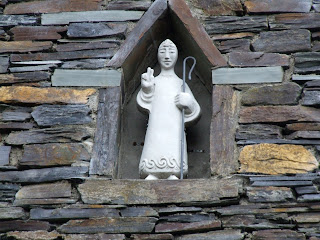 A small statue of Saint Aidan at the new monastery
Around Saint Edan’s Cathedral there are a number of ancient Irish crosses. Many of these crosses in Ireland are very impressive, but the crosses in Ferns tend to have an understated, and possibly under-appreciated beauty. The grave of Diarmuid MacMurrough was once adorned with a beautifully carved Irish stone cross. Sadly Oliver Cromwell smashed it, as he was wont to do to anything that had beauty or substance, and all that remains is a decorated stump.  Dotted around the cathedral are four high crosses. Their shafts have been destroyed and replaced with modern reinforced concrete, but the bases and heads are original. They have a stark beauty despite their plainness and even on the rainy day when I visited, they emitted a solemn grandeur. One of the high crosses in the grounds of Saint Edan's Cathedral
At the far end of the village is the modern monastery of Saint Aidan. It is a large functional home with a collection of nuns (Sisters of Adoration), a very plain, but beautiful chapel of adoration (when inside it feels like sitting in an egg – a peculiar, yet pleasant experience) and a collection of tiny retreat cells for visitors and pilgrims who seek solitude, silence and space to pray and reflect. 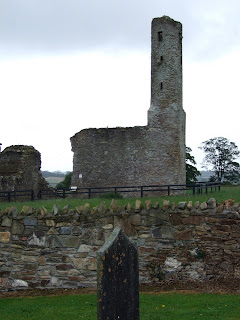 Part of the Augustinian settlement
Ferns is inextricably bound up with the character and mission of Saint Aidan. Before I go any further I must explain the proliferation of seemingly differing names. Aidan was known locally by the nickname ‘Mogue’ which is a derivative of his old Irish name ‘Maogh-Og’ but he is also known by the ancient spellings ‘Edan’ and ‘Aedan’.  Aidan is credited as being the first Bishop of Ferns and through a close friendship with Bran Dubh the King of Hy-Kinsellagh, was able to build his monastery in Ferns; but his more significant mission was in the conversion of the people of Northumbria. Aidan spent some time in Iona and he was also instructed by Saint David in Wales. He settled around Lindisfarne and became Bishop of the same in 635AD and he was to greatly inspire faith in Saint Cuthbert of Lindisfarne. Aidan demanded much of anyone who followed him. Even those who accompanied him on the roads as he travelled where required to join him in saying his offices and spend much time in mediation and prayer. Anyone who chose to follow him for any length of time where obliged to learn all the Psalms by heart and to know at least one Gospel by rote. He is said to have enjoyed times of silence even though he was also said to have at times opened his mouth a little quickly. When a missionary Bishop from Northumbria complained to Aidan about the barbarous and uncivilized monsters of his new diocese, Aidan quickly scolded the Bishop for his lack of patience at which the Bishop told Aidan to go to Northumbria to see if he could be patient. Saint Aidan died in 651AD on 31st January. 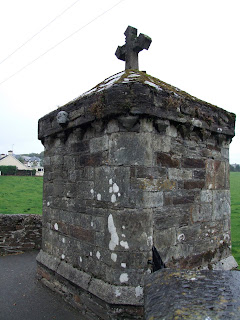 The 1847 well house
Saint Mogue’s well is on the main road through the village of Ferns. It’s not the most peaceful or pleasant of sites, but they have tried to make something of it. The well is said to have appeared at the behest of Saint Aidan himself. While building the monastery, some of the monks complained that there was a lack of clean, safe drinking water in the area. Aidan apparently told them to go and chop down a tree, and when they did a well miraculously sprang up from it’s centre. The well house that is situated on the side of the road is now locked up, but the well is actually right underneath the road. This well house was built in 1847 and some of the stone faces on the well house come from an old medieval ruin in Clone. To the side of the well house is a short path down towards the stream and on this path near the bottom is another structure where the well water is piped into a kind of well shrine. It leans to one side at a slightly odd angle, and nobody has left anything here. It doesn’t really evoke a sense of peace as trucks thunder past above, but they really have tried to make it a special area. A small garden has been created with a bird table and the stream has been enclosed by a small stone wall with a grassy area in front of it and a place to sit. Maybe at certain times of the day this place can be quiet, but I suspect that until they redirect the traffic, this place will never really be a popular spot to continue that tradition of Saint Aidan of meditation and prayer. If you can concentrate through the noise, pray for the people of Ferns and for Christianity in Wales and Northumbria. Pray too for those who come to this place on retreat and for visitors, that they might find it a restful and peaceful place. 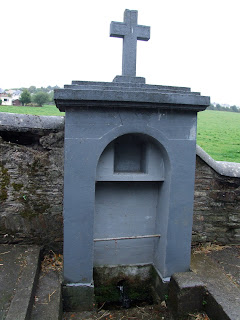 Saint Mogue's well
Loving God, look with mercy on your servants who seek in solitude and silence refreshment of soul and strengthening for service; grant them your abundant blessing in the peace of Christ our Lord.
Amen. 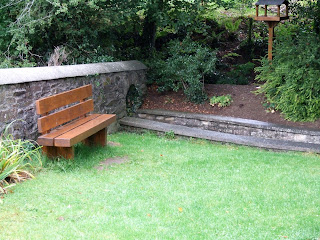 The garden at Saint Mogue's well
How to find it:
As you enter the village of Ferns via the N11, the well house can be seen on the right hand side of the road. If you are in Saint Edan’s Cathedral, the well is directly opposite its main entrance. 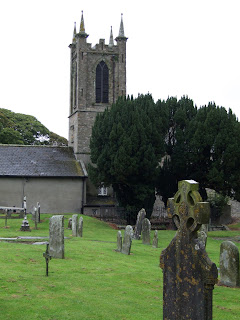 A view of Saint Edan's Cathedral from the adjoining graveyard