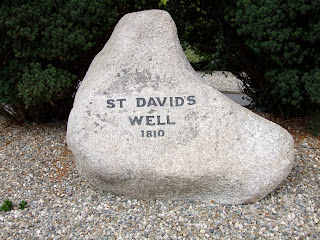 The stone at the entrance to the well site


This well is in the town land of Ballynaslaney -  effectively in the middle of nowhere! For a well that is so discretely hidden it seems to attract an incredible amount of attention. I visited on a blustery, slightly wet Monday mid-morning and I didn’t imagine that I would meet another living soul. There are a few houses in the area, but it’s quiet and mostly farming land around. As I sat down to eat my early lunch before exploring the well and surrounding area, workmen beginning their lunch break paid a visit to the shrine. Then came a car full of four people armed with various bottles and plastic containers which they filled with well water, and so it went on - a steady stream of pilgrims; some praying at the shrine, some going to the well house and others taking water from the well. 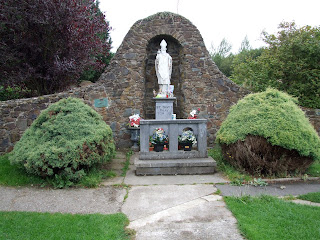 The view down the path to the well
As a shrine this place is somewhat surprising. It has been reconstructed a number of times, but now it has an imposing and mildly smirking, whitewashed Saint David (erected in 1961) watching carefully over all the procedures around his well. He holds more prayer beads than he could ever need and is surrounded by a few broken statues and various medals. In 1810 the well was given an overhaul, but in 1840 a local farmer was beginning to get annoyed at the attention the well was receiving and he didn’t appreciate the crowds trespassing on his land to get to the well. He covered up the well and levelled the old well house to the ground with the intention of making it a functioning field for the grazing of his cattle. The farmer discovered to his horror that no grass would grow and eventually the well was reopened in 1910. It was given another major face lift in 1990 and now there is a small well house which includes a small well (piped from the main well) and a larger well at the other end of the site. 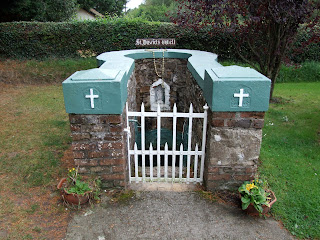 Saint David's well
The well is close to Ferns and the association with Saint David is closely related to Saint Mogue (Saint Aidan -  see Saint Mogue’s Well, Ferns) who is said to have been trained by Saint David in Wales. Saint David is the patron saint of Wales and (rather obviously) Saint David’s in Wales is where he established his first monastery. He was said to have been very intensely religious and extremely austere. He was known as ‘the waterman’ because water was the only drink he ever allowed himself and he strictly rationed his allowance of bread in the monastery. Despite this, the monastery in Wales attracted many followers and many came from Ireland also, to be trained and guided by Saint David. 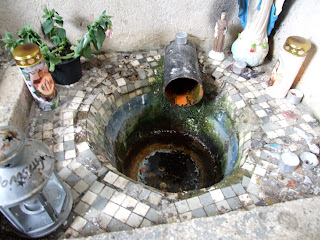 The small well inside the well house
The well house is quite a sight. It’s a small tumble-down house with a dirty prie-dieu and a veritable mountain of statues, medals, pictures, flowers and mass cards. Shelves line the walls to house the things that people have brought. In one corner a small basin of small square cut tiles set into the floor, holds water piped down from the main well. If you aren’t too steady on your feet, getting water from here would certainly be easier. A small chest of drawers hides behind the door, its drawers bursting open with mass cards. It would be all too easy to be scornful of all this, and I must confess that when I paid a visit here it did come to mind when I first entered. It’s so disorganized and such a jumble of objects that it felt anything but holy. I could have written a scathing blog note about superstition and the gaudy, tacky statues. I could have been snobbish and dismissive, disgusted and self-righteous about it all, but I made the mistake of looking at a massive pile of books. 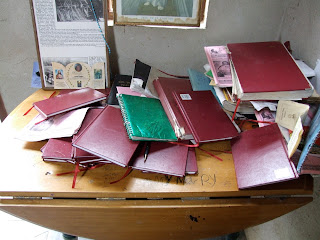 Books full of prayers
As you enter the well house there is a small table and on this table sits a pile of books - and I do mean a pile. On the day I visited, when I had a moment or two to myself in the well house, I opened the books and began to read. Page after page after page of prayers: some short, some long, some pleading, some thanking. There is not one obscenity here, not even a tiny jot of graffiti - only prayer. Peoples’ lives are laid bare in only a few words that reveal moments of joy and moments of dread. Suddenly all the chaos began to take on a new meaning and I started to see the tokens that had been brought with these prayers in a new light too - they are the semi-permanent sign of continuous prayer at this place; the cry of the human to God from the very depths. I felt intensely guilty at this well because I didn’t recognize genuine prayer when I saw it, but instead I chose to jump to a critical conclusion in my state of spiritual snobbery. 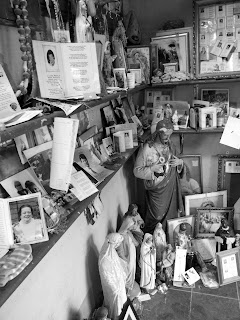 Inside the well house
The main well is surrounded by a wall with steep steps down the centre to the water and a poor's box to one side. The water is clear and I watched many people drinking it. It’s said that the waters are a cure-all. Despite its business this place is remarkably peaceful. It has no great views and even though they have tried to make a garden area out of it, it doesn’t quite work. But what is so special about the area is the fact that it is imbued with good old honest prayer. If you will pardon the weak pun, it is soaked in it. There is a seat beside the well, which for me proved to be the perfect location to say an office and an apology. 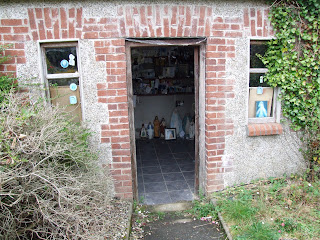 The well house
Pray for the searching, intercede for those who have asked for prayer in the books in the well house and give thanks to God for the influence of Saint David on many of the Irish saints.
Almighty God, who called your servant David to be a faithful and wise steward of your mysteries; in your mercy, grant that, following his purity of life and zeal for the Gospel of Christ, we may with him receive the crown of everlasting life; through Jesus Christ your Son our Lord, who is alive and reigns with you, in the unity of the Holy Spirit, one God, now and for ever.
Amen. 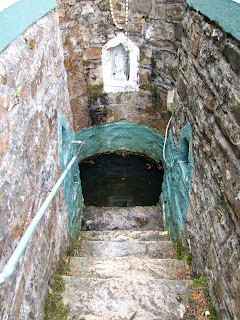 Looking down into Saint David's well
How to find it:
Travelling down the N11 from Enniscorthy to Wexford, the well is about half way there, signposted for Ballynaslaney (If you get as far as the petrol station on the left you have gone too far). Travel down the narrow road keeping to the left until the road turns down a small slope and up the other side while banking to the left. The well is on the right hand side. 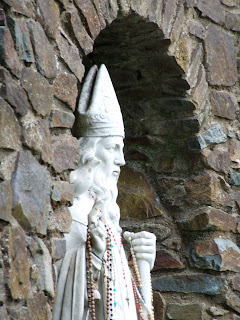 A statue of Saint David