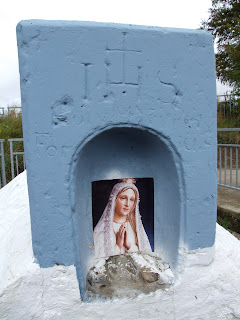 The capstone above the well


From the Irish, Mullach Eadrad (meaning ‘mound of the milking’), Mulhuddart was once a quiet village close to the city but is now a busy suburb of Dublin, boasting both Dublin’s largest housing estate and largest industrial estate close by. Today there are lots of modern housing estates all over the place and the roads never seem to get a rest from the constantly moving traffic. The plethora of narrow roads with no proper edging is an indication of just how quickly this entire area has been suburbanized.
Up the hill from what was once the village centre stands a ruin of an old church within Mulhuddart graveyard. The church was called the Church of Mary and is a medieval ruin, but why exactly it stopped being used no one is entirely sure. The church was still functioning as a church in the late sixteenth century and is recorded as being ‘in good repair’ in 1615. By 1680 it was a complete ruin and in a very similar state to which it can be found today. 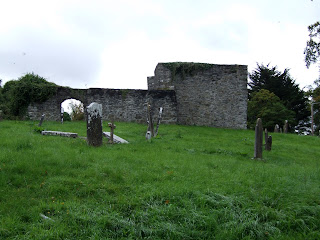 The ruins of the Church of Mary
The well has a close connection to this ruin and tells a tale of an unusual order permitted to thrive in this area which made the well a very popular place of pilgrimage throughout the eighteenth and nineteenth centuries. King Henry VI set up an order initially called the Order of the Guild of the Blessed Virgin Mary. This order of monks and nuns (presumably from existing orders) were provided with a small sum of money for the upkeep of Marian shrines in the area, but in particular for the upkeep of Our Lady’s Well. They erected a small ‘u’-shaped wall as an enclosure around the well and planted a number of trees to create the impression of a grove. The officers of the guild were not in holy orders and the first appointed officers were Sir Nicholas Barnewall and Peter Clinton; neither from the parish of Mulhuddart. Later, in addition to the two officers, two lay wardens and a master were also appointed to the guild. 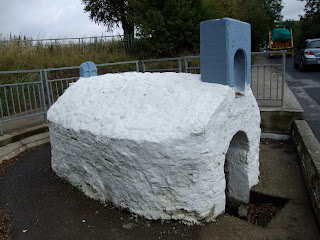 The well
The Order of the Guild of the Blessed Virgin Mary appear to have either run out of money or been disbanded at some point shortly after Henry VI’s death. From this point onwards the well (and presumably the church) came under the care of the nuns of Grace Dieu. The Grace Dieu nuns were an order of Augustinian canonesses dedicated to God, the Holy Trinity and Saint Mary founded by Rohese de Verdon in 1241. They were not a wealthy order and the priory’s in England were short lived on the whole -  the last one was dissolved in 1538. This order faired rather better in Dublin, surviving the reformation and living right through the period of the penal laws. They had a convent in Luttrellstown near Mulhuddart, and they were able to raise enough money to put a stone roof on the well, building on the already existing stone walls. They capped the roof with a stone inscribed with various prayers to the Virgin and a small niche and an incised cross above. It was through their efforts that it remained a place of pilgrimage for some time and even today the Roman Catholic parish nearby is dedicated to the Blessed Virgin Mary. On the front of the stone on top of the well housing the inscription reads, ‘Holy Mary, Pray For Us’ and to the side, ‘O Blessed Mother and Ever Virgin Glorious, Queen of the World, Make Intercession For us.’ The inscription on the other side is more difficult to make out, but a partial reading is, ‘Vouchsafe that I May Praise Thee O Sacred Virgin Ob…   …an for me, For ……… Ag……Thy Fine…….” 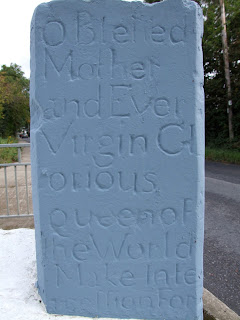 The inscribed words to the side of the capstone
The well housing is kept in reasonably good order even if it is a little heavily painted, but it is no longer in a grove surrounded by trees and grass; it is on a main arterial road out of the village of Mulhuddart. It is busy, dirty and noisy, lacking any sense of privacy or place and surrounded by concrete and ugly railings. In one sense this could have been a rather special well in an area so heavily populated and busy that could have stood as a small pool of calm in such an industrious area, but sadly the well itself is a muddy trough. 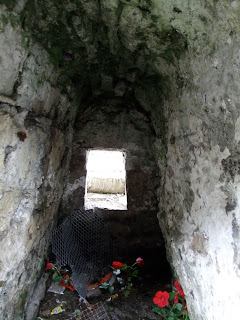 Interior of the well
A pattern was traditionally held at this well on the feast of the Nativity of the Blessed Virgin Mary, when people would come and pray rounds at the well by walking around it thee times. After this they would kneel at the entrance to the well and either sprinkle the water on their heads or dip in a finger and make the sign of the cross.
The well was recorded as being full of water in 1974 and in 2006 on two separate visits by archaeologists, but there has been so much building in this area that I fear the way the water rises must have been effected. At the height of this wells fame, pilgrims would come and crawl on their bellies towards the small opening at the back of the well and out their heads in, bathe their eyes, take a drink and then kiss a glass bauble that hung from a thread. The glass bauble is mentioned by a number of writers of the period, but unfortunately they do not elaborate on exactly what it was! The opening at the back of the well still exists today, but in 1974 and in 2006 the water had already lowered so much that it wasn’t possible to drink from the well in this way. I visited on the day when the pattern used to take place; the Nativity of the Blessed Virgin Mary (Lady Day) on 8th September. There was no pattern and nobody was coming to collect water from the well, so I suspect that everyone in the area already knew it was gone. It had a selection of rubbish of different kinds left in it and someone had left a number of red, cut roses. It was somewhat sad, like the bringing of flowers to a grave. 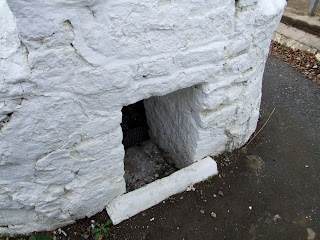 The back entrance to the well
The Order of the Guild of the Blessed Virgin Mary has gone, as have the Grace Dieu nuns and even this once deep well, but the Augustinian order has not disappeared from these shores and in fact they are very active in Dublin city. Pray for their work in hospitals, parishes, schools, nursing homes and in retreat houses and for their work in adult faith education. Here also, even though this well is dry, one surely must remember the Theotokos.
Hail Mary, full of grace,
The Lord is with you.
Blessed are you among women and blessed is the fruit of your womb, Jesus.
Holy Mary, mother of God, pray for us sinners now and at the hour of our death.
Amen. 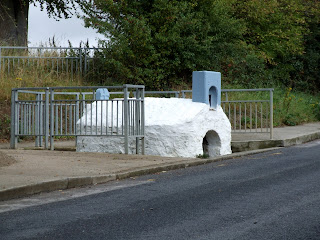 Our Lady's well
How to find it:
As you travel up Church Road towards Mulhuddart graveyard the well house is easily spotted right on the edge of the road on the left.