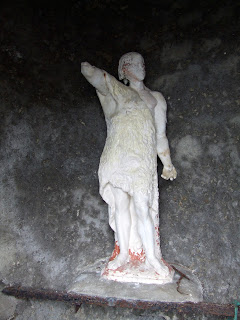 The statue of Saint John the Baptist inside the well

Johnswell is a little village in County Kilkenny, composed of a main street with a general goods store, a pub, a few houses and a chapel. In this tiny village is a sizable holy well dedicated to Saint John. It is almost directly opposite the general goods store, on the other side of the street from the chapel, housed in a miniature castle, complete with heavy wooden doors and guarded by two stone lions! A sign proclaims that these ‘improvements’ were finished in 1897. 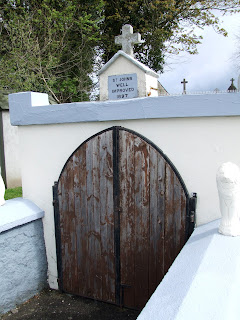 The village itself is quiet and there has been some attempt to make the area around the well a quiet garden of reflection (finished in 2005), but I think the days are long gone when this area was cared for or the well looked at. Someone has painted the walls in living memory, but I don’t think the well gets as much attention as it used to. It is housed in a peculiar structure with heavy wooden doors that you need to kneel down to open, and on opening the doors you are greeted by a broken statue of John the Baptist in gleaming white. He wears his distinctive animal skin clothes and presumably held a staff, but his arms are now broken and he looks like he would be more at home in a pagan Roman temple than anywhere else. The water in the well is deep, cool and clear, but a couple of pipes seem to be siphoning off some of its waters - a practice that is sadly becoming all too common throughout Ireland today. Some of the ancient and original well housing appears to have survived, but in front of the well a concrete drive leads down to a lower portion where the well water enters an enormous rectangular basin (full of water weed) which was presumably for baptism and for bathing the sick. 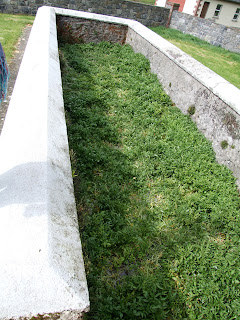 The large baptismal and bathing basin, full of water weed

The holy well here in Johnswell was once regarded with great significance and attracted many thousands of pilgrims on the feasts of Saint John the Baptist. A wonderful description is given of a group of pilgrims who travelled to the holy well to mark the beheading of John the Baptist. It is a fragment of a memoir, sadly by an anonymous writer, in the early Victorian era. He describes how he travels with a large party of pilgrims who set out from Kilkenny to Johnswell on a journey of approximately twenty-five miles. They didn’t reach their destination until after sunset by which time many beggars, crippled and sick people had already assembled. At this assembly a woman of the area announced that on this particular feast no healings were ever heard of and that there would be no healings that night and instead they would have to return on the feast day of the Nativity of Saint John the Baptist and then be healed by the waters of the well. It is this event that is said to have inspired John Keegan’s (a poet from County Laois) story ‘Dark Girl’ (meaning blind) of a blind girl who comes to the holy well on the same feast and who does not get healed and returns home downcast and disappointed only later to die from her heartache. 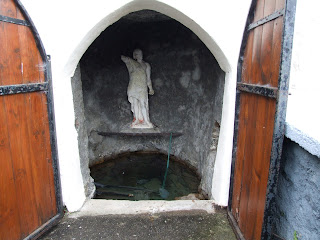 The large pool at the end of the holy well was once used for baptisms. On the eve of the Nativity of John the Baptist people would gather at the far end of the village parallel to the holy well. Here they would begin their preparations for the feast of the Nativity of Saint John the Baptist; one of the oldest festivals of the Christian church, celebrated on 24th June. On this night a huge bonfire would normally be lit for two reasons. Firstly, coinciding with the solstice, the fire is an image of the heat of the ever increasing sun and ties in with John’s own words about himself in relation to Jesus; “I must decrease, that he may increase”. The fire was also thought to be a cleansing event and people would jump over the bonfire to cleanse themselves from sin and then they would make their way to the pool at the holy well and immerse themselves in the water as a cleansing from sin and as a reminder of what John the Baptist asked his own followers to do to get ready to meet with Jesus. Patterns at this well were many, various and always very well attended. In living memory people can recall large crowds at events here, but in recent times it has almost completely disappeared. 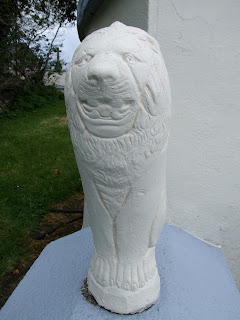 One of the lions guarding the well

Curiously the local parish didn’t seem to feature greatly in any of these events -  although presumably the clergy did play their part in the baptisms that took place at the well. The church was built in 1817 and is dedicated to Saint John the Baptist. It was refurbished in 2009 and has a large crucifix on the side of the building giving it a somewhat austere appearance. The interior of the chapel is plain and undecorated. 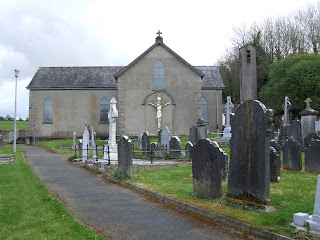 The Chapel of Saint John the Baptist

Despite the fact that it would probably be a very unpleasant experience to bathe in the waters of the well in the rectangular basin, there is still access to the waters here. It is in pleasant enough, if not slightly neglected surroundings and the vision of Saint John is quite something to behold. Legend has it that this well is attended by angels, and in the night when all is quiet, the faithful who gather at this well in prayer might be lucky enough to hear the wings of the guardians of this sacred spot, and if they do their prayers will surely be answered. 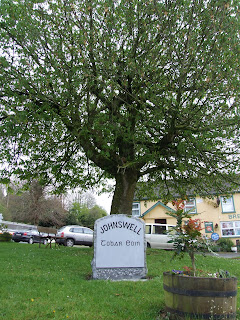 Almighty God, by whose providence your servant John the Baptist was wonderfully born, and sent to prepare the way of your Son our Saviour by the preaching of repentance: lead us to repent according to his preaching and, after his example, constantly to speak the truth, boldly to rebuke vice, and patiently to suffer for the truth’s sake; through Jesus Christ our Lord, who is alive and reigns with you, in the unity of the Holy Spirit, one God, now and for ever.
Amen.
Collect for the Nativity of Saint John the Baptist

Almighty God, who called your servant John the Baptist to be the forerunner of your Son in birth and death: strengthen us by your grace that, as he suffered for the truth, so we may boldly resist corruption and vice and receive with him the unfading crown of glory; through Jesus Christ your Son our Lord, who is alive and reigns with you, in the unity of the Holy Spirit, one God, now and for ever.
Amen.
Collect for the Beheading of John the Baptist. 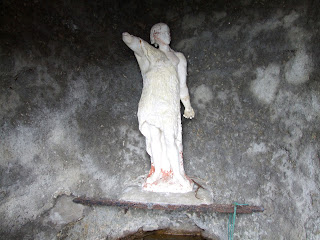 How to find it:
On entering the village travel towards the green which has a large stone sign and a bar/general goods store on one side and the holy well on the other. The well housing faces away from the road and as yet, no keys are required to open the well.