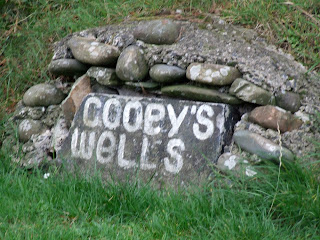 Down a beautiful stretch of Strangford Lough, not far beyond Portaferry is the place where three wells lie in a ditch below a ruined church, sheltered slightly from the bitter sea breeze by a saintly road now sunk deep in bog. These are the Cooey wells that take their name from Saint Cooey. 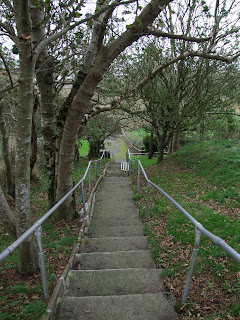 The path down to the site
Cooey is his nickname. The saint’s real name is Saint Cu’Mhaighe and he is unfortunately only recorded in tradition. He appears in no obits and in no other accounts of the lives of saints, although legend has it that he was to become abbot of Movilla before his death. His name does appear however in other forms, creating place-names in the surrounding area. Even tradition tells us very little of who Saint Cooey was or what he did, or even where he was from. All we know is that he was incredibly disciplined in his practice of penitence which greatly impressed the local population - so much so that they decided to follow his religious faith and practice and shortly established the parish of Witter by his wells and near the stones that he is said to have frequented to do penance. The church is recorded as being established by the seventh century, but now only a few broken stones remain. You can see the stones, partially encased in a wooden box on a modern altar with a covered roof. All around are little headstones of buried saints and early Christians. 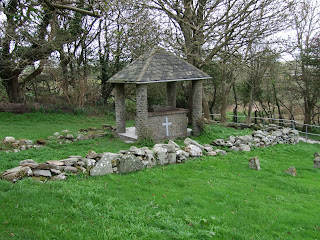 The modern altar
The modern structure of an altar and a wooden case for the stones with a roof was the result of efforts made by Fr David Morgan in 1976. By the 1970’s Cooey’s well and site had almost been forgotten. It was neglected by the tourist board and left to become overgrown and inaccessible. In 1976 Fr Morgan, his parishioners and a local farmer set to work to make access to the wells and the site possible again. They built a road up to a car parking area and paths down to the old church site. An altar was made and a roof placed over it, marking the site of the original church, and the three wells were fully restored. In 1978 over a thousand people from the area turned out to make a pilgrimage to Cooey wells once again. The tradition of making a pilgrimage to Cooey wells on the Sunday closest to Saint Peter and Saint Paul still continues today. This is the poem of a local man, William McCarthy, who writes of his gratitude at the completion of the work on the site in the 1970’s: 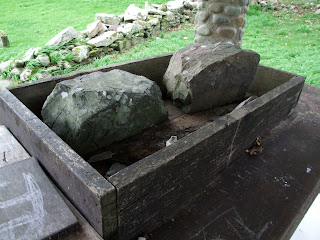 Stones of the original foundation
The Road To Cooey's Wells
There's a place that haunts my memory, that always seems to stay,
Since I first sought St.Cooey's Wells, one holy Sabbath day,
I trudged the rugged pathway, through woodland hills and dells,
To seek a cure from those waters pure, that flows from Cooey's Wells.
As I try to pace this awful place, all sinking in decay,
A lone skylark accompanied me that lovely summers day,
Where no brain of man had thought to plan, no human hands had made it,
Like the endless sea t'was wild and free, as Mother Nature made it.
I crossed the rusty bogland, and tramped through field and fallow,
With many an unseen pitfall set, through water deep and shallow,
Now twenty years have long since gone, since first I made my way,
My footseps are unsteady now, my hair is turning grey.
Since I first sought this place divine, and crossed the hills and dells,
And trudged that rugged pathway, to St Cooey's Holy Wells,
Today I've wandered back again, as I have often done before,
And again I stand on this barren land by the lonely windswept shore.
This place still haunts my memory, since first I made my way,
My footsteps are more feeble now, as here I stand today,
No rugged footpath have I crossed, nor climbed the hills and dells,
For the new roadway I've trod to reach the Holy Wells.
Now I write this lay in tribute, this message to convey,
To those gallant men who toiled so hard, this new roadway to lay,
So let us sing their praises high, they toiled but not to gain,
And I believe what they achieved a symbol shall remain.
To the old and young, and everyone, that helped in any way,
We cannot thank them as we should, but we for them can pray,
At last not least our Parish Priests no effort did they spare,
In their devoted way they helped to lay that new made roadway there.
Now I thank the Lord for every word he gifted me to pen,
Who gave light this day to write to praise those gentlemen,
When memories old our minds unfold throughout the coming years,
Remember them of whom I pen, those gallant Volunteers. 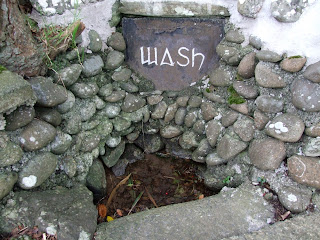 The first well
As you come down the path to the new altar, follow on round to the three wells. They are slightly over tended, but nicely maintained nonetheless. The wells are labeled in terms of what the visiting penitent should do. Following the path around further you will find a large reed bed that leads out onto salt marshes by the sea along the saint’s path towards a stone, said to be Saint Cooey’s penitential stone.  It’s basically a large flat stone with some white pebbles embedded in it which are said to represent the points where the saint placed his knees and his hands to pray. 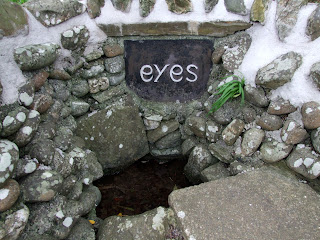 It is a beautiful place, and a peaceful place too. Despite the restorers like of concrete, I have to say I’m glad they made the effort, for without them this place would have surely been lost. I can’t say it’s a place I would want to visit on the large local pilgrimage day though. The saint’s life seems to suggest that a visit close to lent would be more suited and the area is certainly suited to a penitential feel, especially in winter. 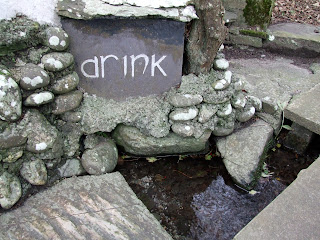 The third well
O God our Creator, look down on Thy sinful and unworthy servants, and when we are called to venerate Thy holy Name, deprive us not of the hope of Thy mercy. Grant unto us, O Lord, all that be needful for salvation, and vouchsafe that we may love and fear Thee with our whole heart, and in all things work Thy will. For Thou art our God, ever hymned and magnified with ceaseless song by all the heavenly hosts. Let our mouths likewise be filled with Thy praise for the majesty of Thy holy Name. And grant us to participate and inherit with all them that fear Thee in truth, and keep Thy commandments. By the prayers of the all-holy Mother of God and ever-Virgin Mary, by the intercession of the heavenly, incorporeal powers, and of all Thy saints down through the ages.
For unto Thee belong all glory, honour and worship, unto the Father, and unto the Son, and unto the Holy Ghost; now and for ever: world without end. Amen. 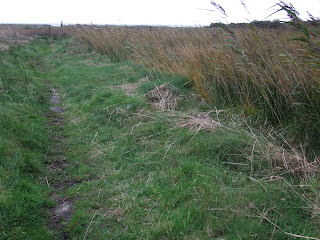 The saint's path to the penitential stone
How to find it:
Cooey’s wells are about 3 miles outside the town of Portaferry. From the centre of the town head out via Windmill Hill and come down the other side out towards Ballyfounder Road. Keep following this road as it swings round to the right and the wells are situated on the right. They are easy to miss as the sign is low to the ground, but suitable gateposts let you know you have found the right spot! 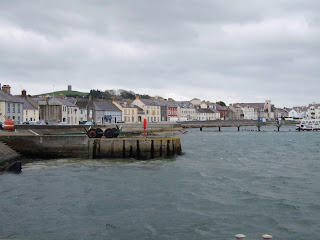