What is a Holy Well? 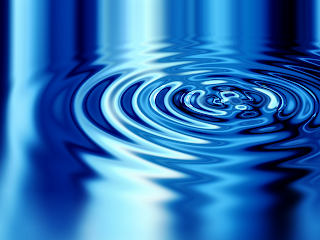 "The Holy wells—the living wells—the cool, the fresh, the pure,
A thousand ages rolled away, and still those founts endure."—
Frazer
Wells have always been significant places of gathering for communities and the Judeo-Christian tradition places great emphasis on wells, pools and rivers and the act of washing in water to cleanse away sin and disease. Tertullian wrote that the religious veneration of well and pool sites begins in Genesis when the Spirit of God moves over the face of the waters to bring forth light and life. The Judeo-Christian scriptures have many references to holy water sites, most notably the River Jordan and the pool of Bethesda, where a great multitude of the sick and lame lay waiting for the waters to be stirred by the movement of the Spirit of God. 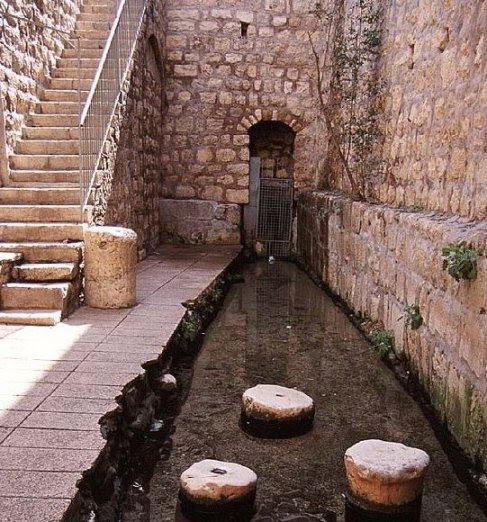 The pool of Bethesda (also known as the pool of Siloam)

For early Christians in Ireland, well and pool sites were a conglomeration of a number of factors. Some of them were pagan sites before they were ‘Christianized’.  Most of them -  if they are in fact ancient – were sites that people knew provided relatively safe drinking water. Almost all holy well sites related to a saint are considered to be places which have been used to baptise new converts. Over time various traditions have been built up around these sites, leading to various religious practices, some of which can be quite peculiar to a particular site. Many of these sites have a folklore associated with them too; some of these stories recount the various miraculous works of the saint associated with the well and tales of various important people who have been healed, some are very obviously ancient Christian myths used to teach enculturated aspects of the faith and sometimes Christian ethical values, and others have since lost their meaning or usefulness or maybe had no such use other than to pass a winter’s evening by a hearth.
The most common practices at wells and pool sites are to make your ‘rounds’, which involves circling the well in a rather slow and deliberate fashion, three times as a reminder of the Trinity, while all the time praying. Some make a pilgrimage to wells to pray for themselves, for healing, or to simply enjoy the peace of the place. Others make a pilgrimage for those who cannot make it or in memory of those who were named after a particular saint and who have since passed into a greater light as a reminder of the link to a great cloud of witnesses and a Christian lineage in Ireland that stretches back thousands of years.
Visitors to wells may also observe the ‘pattern’. The pattern is normally a set of days around the feast day of the Saint to which the well is dedicated. It normally involves feasting, entertainment, a pint or two and a day of prayer and pilgrimage culminating in the celebration of the Eucharist on the feast of the saint. During the course of the pilgrimage in the pattern the saints relics may be paraded (if they are still in the keeping of the local parish -  a rare thing now), people may also bring small stones with them to throw into the well (sometimes coins) or to use to scratch a cross into a rock and some may bring a ‘cloutie’ which is a strip of linen that is hung by a tree (normally a Hawthorn tree) near the well as a symbol of prayer and devotion. Pilgrims may also leave items of clothing or objects that relate to the healing aspect of the well or represent the people for which they are praying. For instance, glasses may be left for someone with a sight impediment, bandages for someone with a broken limb or a little teddy for a sick child. The most common ailment to be healed is of course eyesight. The Christian tradition has always placed great emphasis on light and on seeing, in particular a spiritual ‘seeing’.  It’s not entirely surprising that sites where many have been baptised and ‘seen the light’ have become places associated with curing eyesight.
People still drink from the wells today and in some places in the rural counties of Northern Ireland, where community healers (still a fairly lively tradition today) are active, well water plays an important role in the creation of healing tonics and poultices. Personally, I wouldn’t recommend drinking from every well. Even the most inviting ones may have had a few dogs bathing in it not so very long before your visit! The practice generally is to either drink the water, or to scoop some up and pour it over your head or dip a finger in and cross yourself as a reminder of your own baptism. Wells associated with the healing of a particular ailment, say for instance blisters on the feet, it would be normal to dip your feet into the well. At some wells thoughtful Christians will leave tiny empty bottles for you to fill with the water to take home and bless your house with.
If you visit any of these sites and do rounds or a pattern with others you may also see people touching stones that are seemingly randomly scattered around the site. These are often relics of a pagan past with Christian mythology layered over the top, but they are still considered by some to be wishing stones or, in a rather more sinister vein, cursing stones. 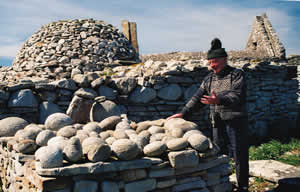 Cursing stones on Inishmurray island.
Posted by Adomnán at 6:24 AM