Not a great deal is known about the character of Fr O’Donnell, but it is said that he would walk around Ardmore cliffs and settle in a particular area to say his office. At the very spot where he is said to have prayed, a spring appeared and it’s waters made their gentle way down the cliff face. 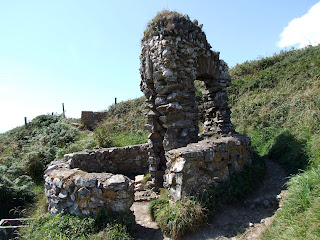 The construction at the well
In 1928, a Mr. Rahilly from Limerick was staying in Ardmore, recovering from an illness. He claimed that the well had curative powers and that after he had partaken of its waters, he found it to be particularly potent in the healing of eye ailments. With some local help, Mr. Rahilly set to work to construct the somewhat hideous pile of stones that now reside there. It’s a large and ugly arch over a small uncomfortable stone seat with the well springing up from underneath it. It feels a little like sitting on an outside toilet and I fear I was not moved to prayer, despite the stunning beauty of the surrounding area. 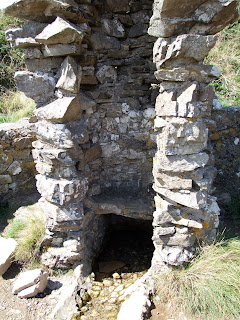 The well under a stone seat
It is said that Mr. Rahilly expected the site, or at least hoped that it would become a site similar to Lourdes. This is Irish folk religion at its very worst. Only around the corner is a site of national and primary importance for the island of Ireland and here is another well that attempts to steal its glory but in no way manages to have the same sense of serene peace. It is surprising that this well has survived at all as Fr O’Donnell, with whom it is closely connected is not a saint, but was a silenced, defrocked priest. 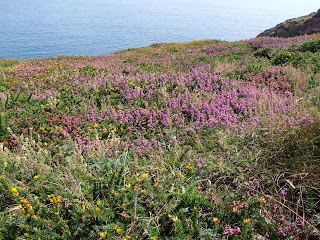 A bank of heather at Ardmore cliffs
This isn’t a well I am particularly fond of. It has no sense of place, little history and spurious beginnings. I’ve said I would visit as many wells as possible, and this is one on the list. It’s on the path of the Ardmore cliff walk, so you can’t miss it – unfortunately.