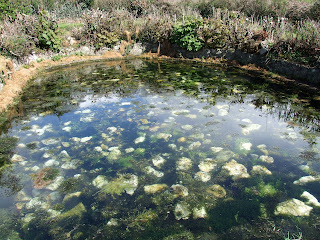 Saint Moling’s well in the parish of County Carlow in St Mullins, is a famous well that to this day still has a significant pattern observed there. The pattern takes place on the feast day of the saint on the last Sunday before the 25th July and it normally involves marching bands, food stalls, a mass (and sometimes an ecumenical service), school children singing and lots of pilgrims come to bathe their feet. The pattern makes a procession from the holy well itself, up the hill towards the graveyard - the site of Moling’s monastery and possibly the site of his burial. 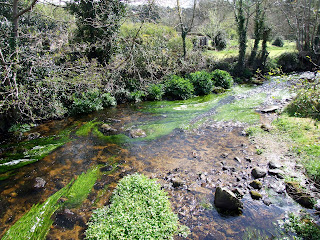 The stream by the turas

St Mullins is a very beautiful place with the remains of an old motte and bailey perched at the top of a hill alongside a collection of ruined churches, remains of a round tower and even fragments of a high cross. To the left lies the holy well and to the right lies the slow and winding River Barrow shrouded in leafy trees. It has a small café down by the riverbank and is the perfect spot to wile away a sunny afternoon. This is an incredibly pretty spot and a great hidden little gem in the county. 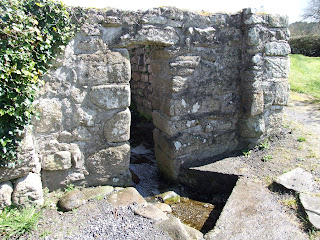 The bathing house below the well

The well is said to have a curious beginning. Saint Moling was said to have been interested in acquiring the wood from one of the five trees of Ireland to build a church on the land that had been granted him by Fingin (of Cashel fame). Saint Laserian had also expressed a great interest in having some of the wood from the Yew of Rossa (which had recently fallen), but Moling - who was very close to Laserian - convinced the saint to part with the precious wood. When the wood arrived on the site, Moling had been working the wood and a small shaving entered his eye causing him great discomfort. One day as a cleric walked past he noted Moling sitting idly by the roadside and he asked him what the matter was. Moling explained that his felt the talons of an eagle, a branch of holly and the scratch of a griffin in his eyelid each time his eye moved, causing him much pain and discomfort. The cleric took pity on Moling and blessed a local well of water and told him to bathe his eye in it until it got better. The Brussels manuscript of the 'Birth and Life of Saint Moling' makes reference to the healing well with many rather obscure allusions to Tobit, but from this passage it seems clear that the well was considered as being a holy well of general healing rather than for anything specific. Today, however, the well’s healing properties are considered to be somewhat specific. It is said to heal ulcers on the feet (which Moling suffered from later in life), eye ailments, a trinitarian visit to cure warts and a cure for flu (whereby the person must duck their head into the freezing cold water three times!). In 1349 visits to the well reached fever pitch from a desperate people living in mortal fear of the plague that was sweeping Ireland at the time. Since then there has been a steady flow of pilgrims - some who come for healing, some for prayer and others just to enjoy the peace and the beauty of the area. 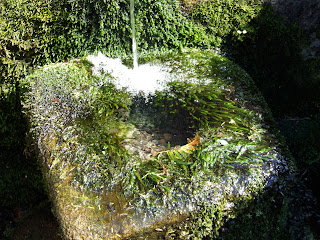 One of the stone basins full of well water

The well is slightly above the lay of the land, which seems a little curious, and it is said to be seven springs rising into a large basin with rocks and lumps of quartz. The waters flow from this through two narrow channels, down into stone basins, which in turn overflow into a trough that winds its way down to the river. The trough in the grass is known as the turas, or the pilgrim’s way. Tales are sometimes told of the bush that grows at the well being from Saint Moling’s original walking stick that he planted there to bathe his eyes, and in the time it took for him to complete this act the dead stick had come to life and sprouted and rooted itself to the spot. However, there are other wells dedicated to Saint Moling which also make this bold claim! 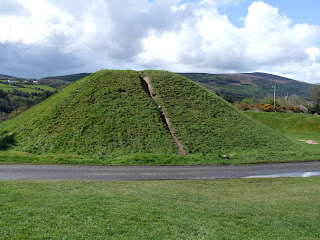 The Motte and Bailey

Up the hill from the well is the seventh century monastic settlement, known in Irish as Tighe Moling (House of Moling). The monastery was built on land gifted by Fingin under the instruction and careful spiritual direction of Saint Aidan from Ferns. It is said that Moling dug out the mile long watercourse to power his mill on the site – a task which took nearly seven years. Today none of the original monastery buildings survive, but you can see the remains of a round tower and a badly weathered fragment of a high cross. Worship continued on the site up to more recent times in the Church of Ireland parish church built on the site in 1811. There are three other church remains on the site, the great church (Tempall Mor) said to be the burial site of the saint. There is another little shrine church that caught my eye. Right at the very back of the settlement a small ruined shrine church perches close to the edge of the hill. It bears a sign that says it was ‘Saint James’ Cell’. Ordinance Field Books from 1839 record two pattern days held here in times past. The first was held on 17th June in honour of Saint Moling (to commemorate his death in 696) and another on the 25th July in honour of Saint James. On this day people visited Saint Moling’s well and the Ordinance Field Books describe it exactly as it appears today. As to what the cell of Saint James is, is not very clear at all and much digging in books and papers has not revealed an answer I’m afraid. It is entirely possible that at one time it held a relic of Saint James, brought by a visitor to the site or by one of the monks. Could it be that this cell is the rough granite rubble shrine church of Moling? All other six Medieval church ruins are clustered around it on what is otherwise a substantial and open, flat site. 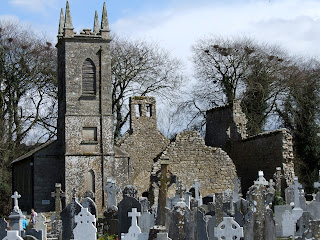 The High Cross towards the back of the site is now sadly very badly eroded and almost impossible to decipher. The base of the cross was a highly decorated, squat cylinder with carved interlinking spirals in a Celtic design. The mains shaft of the cross is broken and missing and the right arm is also broken.  The central figure in the cross is of a crucified Christ flanked by two other unidentified figures. The cross is thought to date from the ninth century. The Book of Moling (preserved in Trinity College Dublin) is a small Gospel book with some notes on Moling’s life and monastery. The book proclaims him as its scribe, but it is generally believed to have been created at least a century after his death. In it a simplified plan of the monastery can be seen with a plan for the erection of no less than sixteen high crosses: eight dedicated to the prophets, four dedicated to the four evangelists, one to the Holy Spirit and three of uncertain dedication (they may be scriptural crosses). The site was envisaged as a double circle with crosses inside and out of the circular enclosures. 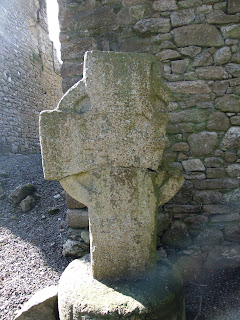 There is no doubt about it, this is a beautiful spot and on a sunny afternoon it is very easy to soak up its peace. On the far side of the hill the River Barrow winds its way gracefully past the lines of trees while people sip hot drinks and chatter alongside the birdsong. It is a hidden gem and a very beautiful well, truly worth the journey. 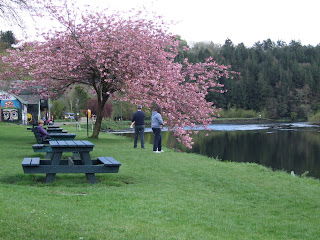 Down by the River Barrow

O Lord, lead me in your river of life. Teach me to trust in your stream of grace. May I never fight your current of love, but come instead into the steady flow of your kingdom; through Jesus Christ who with you and the Holy Spirit, live and reign now and for ever.
Amen. 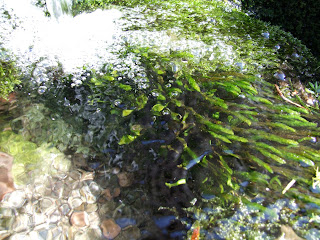 How to find it:
The site is very clearly signposted in St Mullins in County Carlow. The holy well is in the valley where the car park is. Across the road you can see a stream and a small, narrow path. Following this path you come to a small stone building with no roof, and directly above this up on the bank is the holy well. The rest of the St Mullins site is on the top of the hill and the River Barrow is down the other side. 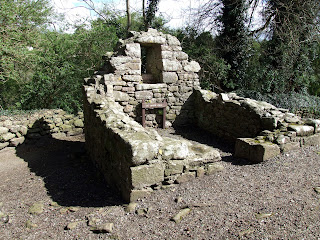