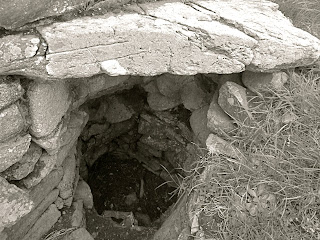 St John’s point lies down the peninsula from Killough and is one of the places mentioned in Van Morrison’s song ‘Coney Island’. It is a quiet place, a little exposed to the elements and with very few houses around. Down a narrow road lies a little ruined church measuring only six feet by four feet and built of shale rubble, having large boulders near the bottom and smaller stones as the walls rise. The structure is dressed with granite cornerstones and lintels with protruding antae. Antae were originally used to support wooden roofs on large churches, but this structure had a stone roof - but it’s obviously pretending to be something that it’s probably not. This is no normal church, nor would it have been an easy structure to build. The granite used is specific to the Mourne mountains, so even the prospect of carrying these large cornerstones all this way for a small church seems slightly at odds with the desire to build a ‘normal’ little church. 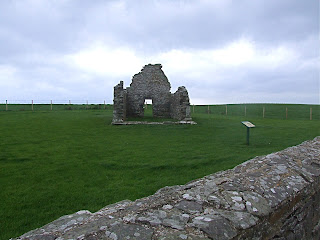 St John's Church
Local guides and books will tell you that this is a church - but I’m not so sure. It is remarkably in keeping with the style of early Irish shrine churches, and seeing this structure in the flesh I did wonder if this was the final resting place of Eoan (John), son of Cairlánd. The building itself dates from around the tenth century and replaces a much older, yet smaller, wooden structure (hence the possible nod to wooden construction in the use of stone antae). Local historian Walter Harris in 1744, reported that the structure was still intact. Now it is in quite a sorry state. It is amazing to think that in such a short period of time this building has decayed so rapidly and significantly. The north wall of the church has a particularly bad lean which probably accounted for its initial collapse. In the 1970’s an archaelogical excavation was done to discover the cause of this increasingly alarming lean (now well corrected, but still visible to the eye) and a number of very early Christian graves were discovered. Further excavations revealed many early Christian graves surrounding the site. Despite the dilapidated structure you can see today, this is one of the finest early Christian churches to survive in all of Ulster. 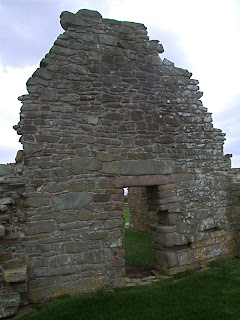 St John's church from the west
Nearby a lighthouse stands in a distinctive black and yellow paint. Originally it was commissioned to the design of George Halpin in 1844 and was decorated with black and white bands until it changed to its more distinctive colours in 1954. Formerly powered by whale oil and coal gas, it was converted to electricity in 1981 and is no longer manned. The Titanic did her initial sea trials just off this part of the coast. 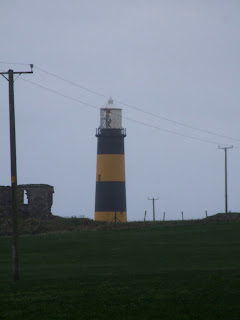 The lighthouse
Next to nothing is known of St John, son of Cairlánd, from whom this area and church takes it’s name. The original foundation was thought to have had a connection to Inch abbey, but by the time it came into the hands of Sir Robert Ward in 1670, the foundation at St John’s Point was already long gone. It’s somewhat sad that here may lie a little shrine church with the body of a saint and all those he once inspired and all we know about him is his name and nothing more. To my knowledge, no pattern has ever been observed here. 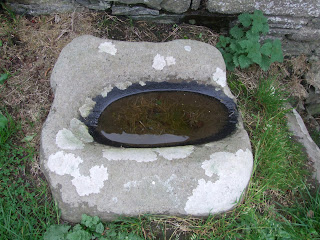 The ballaun stone close to the well
The holy well sits on the side of the road by a small stone wall. A ballaun stone is set into the grass beside it and signage explains that it was likely a mortar for medicines and dyes, rather than an old font as was once thought. The well has a large stone cap resting over it and stone steps down into it, but sadly the well is dry. I was there on a particularly wet day after a particularly wet month, and there hasn’t been any great surge in new housing in the area and the roads are not new. I have seen photographs of this well from the late 1980’s and it was full of water. Across the road from the well a herd of cattle and a shed piped for water looks like a suspicious candidate for the recent change! 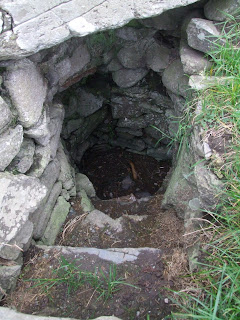 St John's holy well (now dry)
Some records indicate that the Knight’s of St John of Jerusalem had an association with a nearby area, but there are no indications that the point takes its name from them.  It is thought that there is a link between this area and Inch Abbey, which was originally a site settled by St MoBíu of Inis Cumhscraigh around 800AD (later becoming a Cistercian foundation under the auspices of St Malachy), but early records of Inch Abbey don’t appear to contain any record of a St John of Cairlánd, and so he remains a mystery! 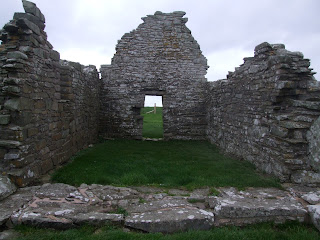 The small 6ft x 4ft church
O Lord, you have given us your word for a light to shine upon our path; grant us so to meditate on that word, and to follow its teaching, that we may find in it the light that shines more and more until the perfect day; through Jesus Christ our Lord.
Amen.
St Jerome 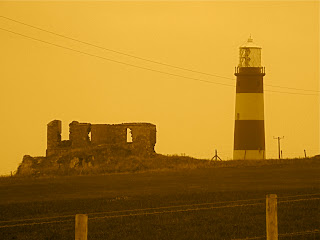 St John's Lighthouse
How to find it:
The church and well are to be found in close proximity down the Lecale peninsula, one and a half miles south-west of Killough. It is clearly signposted down the narrow country roads. 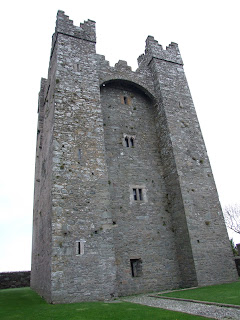