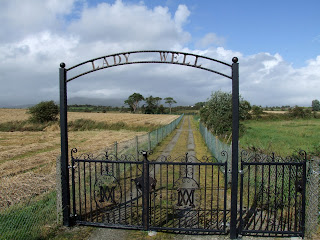 The gates to Our Lady's well, Templetown
Along the Cooley peninsula, off the R175 and close to the beach is a small ruin of church dedicated to the Blessed Virgin Mary, with grave slabs arranged in neat rows and well cut grass. It has a well-maintained path leading up to it and suitable gate through its beautiful stone wall.  For some time this church has been called Kilwirra, a derivation of ‘Cill Mhuire’, meaning ‘Mary’s Church’. This is a building that has gone through a number of significant changes, but most significant has been the population change. This area is quiet and rural, but back in the twelfth century it was once a bustling and highly populated area. 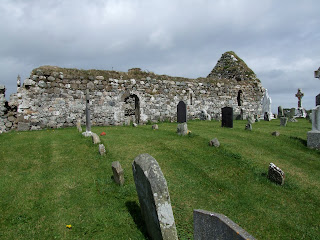 Saint Mary's Church and Graveyard
Templetown received its name from the presence of the Knights Templar – a monastic brotherhood most famous for their activity during the Crusades. Strongbow - whose grave can be found in Christ Church Cathedral, Dublin – added Ireland to the property portfolio of the Anglo-Normans and the Knights Templar were soon to follow. Under Henry II, over two hundred Templar’s were sent to the Cooley Peninsula. Despite their numbers at one time, there are remarkably few remains of their presence. The church of Saint Mary is in the main a nineteenth century building, but there is evidence that it incorporates older buildings. In the graveyard you can find a couple of Templar graves - identifiable by the insignia of the cross and the lamb. 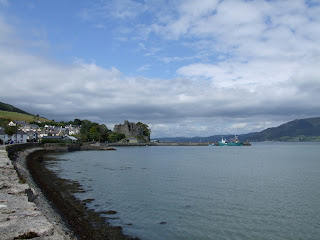 Carlingford Lough
Despite the large numbers sent to this area under deed of Henry II, Clontarf remained their principal site in Ireland. Their presence in this area is thought to have been for the purposes of protection of the northern extremity of the Pale, but there is little or no evidence of the heavily fortified preceptories that would normally be associated with their presence for this purpose. By 1312, after various political movements to remove their power and influence, they were closed down as an order and their lands and wealth granted to the Knights Hospitallers. 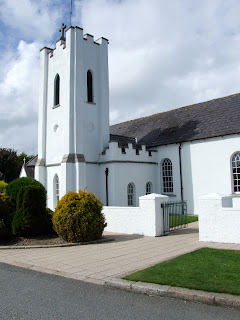 St James' Church
There is plenty to see in the surrounding area and a drive up towards Carlingford Lough is very rewarding. It’s a busy enough area in summer with beautiful views and few good café’s and is supposed to be the second landing site of Saint Patrick. There is also a massive and hugely impressive portal tomb and well preserved wedge tomb out at Proleek to the east. In the village of Grange nearby there is an interesting church dedicated to Saint James and part of Cooley parish in the diocese of Armagh. This church was once part of the Cistercian foundation in this area and linked to the main Cistercian Abbey of Newry. During the suppression of the monasteries in Ireland it was confiscated and granted to the Meryman family. The lands were later acquired once again to build a new church, which was completed in 1762 and additions made in 1812. From the outside it is pleasant enough, but inside it’s a little gem of a church - well kept and not too much gaudy chintz. In many ways it would remind you of American churches in New England with its painted woodwork, low roof and open sanctuary and it feels appropriate to be visiting a church dedicated to Saint James as a pilgrim visiting holy wells. There are a couple of decorative stained glass windows from Harry Clarke studios badly back lit with artificial lighting. From this church, if you head back onto the main road to Dundalk, but turn left, you will eventually see a sign for the R175 which will lead you to the well. 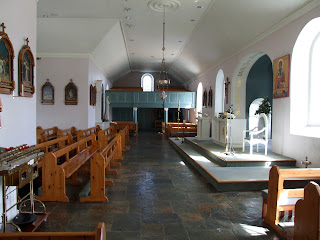 St James' Church (Interior)
As you travel down the road you can see the ruined church on a hill in the distance. You can see the path to well before you reach the path from the road to the church - it has large decorated gates that are hard to miss. It’s so well kept that there must be a pattern held here still or a parish that maintains the area. The surrounding land is a little boggy but much is farmland and the area immediately surrounding the well has a kind of garden with fencing, hedges and some tall pine trees to the back. The well is enclosed in a whitewashed circular stone housing overlooked by a large statue of the Blessed Virgin Mary. The 15th August is the day when this well is most visited (or when a pattern possibly takes place). 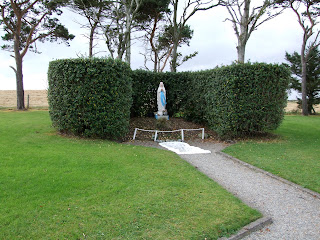 Our Lady's Well
Very little is known about this well, and despite my best efforts I couldn't glean much information, although it is mentioned in a number of surveys done in the eighteenth and nineteenth centuries. On the feasts of the Blessed Virgin Mary the waters are said to rise and water taken at these times is said to be especially efficacious for curing sickness. Due to its rural location this is a very peaceful place and even on a windy day in early autumn, the high hedges protect you from any noise at all. It’s quiet and private and beautiful, despite the fact that there is no stunning scenery, nor is the well that remarkable; but it is hard not to enjoy this place. 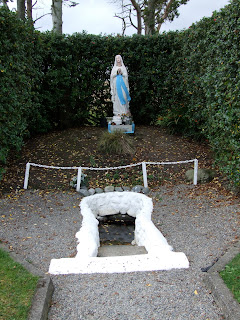 The well and statue
Hymn to the Theotokos
Into his joy, the Lord has received you,
Virgin God-bearer, Mother of Christ.
You have beheld the King in his beauty,
Mary, daughter of Israel.
You have made answer for the creation
to the redeeming will of God.
Light, fire and life, divine and immortal,
joined to our nature you have brought forth,
that to the glory of God the Father,
heaven and earth might be restored. 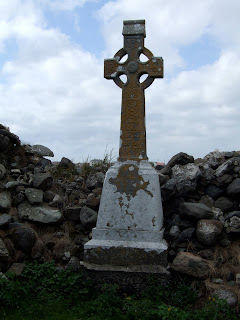 A cross marks a grave in St Mary's ruins
How to find it:
From the motorway take the exit to Carlingford and travel down the old Dundalk road towards Carlingford Lough until you see a sign for the R175, follow this road until you come to Templetown and you can’t miss the church ruins. From here the well is easy to find (you can see it).
Posted by Adomnán at 1:57 PM