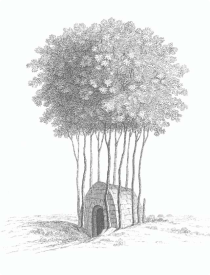 Wright’s engraving of the well in 1730
Dundalk is a large town that has a medieval past, but looking at the town today you wouldn’t know it. The archaeological clues and signs are all gone or covered over. It’s Georgian and Victorian elements have survived rather well though and some of the churches show of a former Georgian splendour and the Victorian Railway station boasts of the wealth of what was then a newly arriving commerce with the onset of the industrial age. Celtic culture also blossomed in this area many moons ago and many famous poets were from this area and wrote famous works of myth and legend, most notably the Cuchulainn. In more recent times Dundalk has had a more unpleasant and chequered history in terms of its reputation of being an area where many nationalist terrorists hid (and sometimes hid the bodies of their victims) and where many sympathizers to the actions of the IRA could be found. This earned it the nickname of ‘El Paso’. 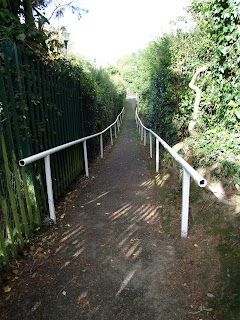 There are two churches worth a visit in the town. Saint Nicholas’ Church of Ireland parish is in the town centre and can be identified by its clock tower and verdigris green spire. It’s a medieval building with later additions and a Georgian looking interior. To it’s north side are windows with an unusual Celtic designed tracery. The graveyard has a large well kept fever grave and a somewhat strange triangular tomb. It is said that Saint Richard of Dundalk is buried here, but the exact location is unknown. The east window houses some curious old Dutch stained glass some of which dates to the early 1600’s. 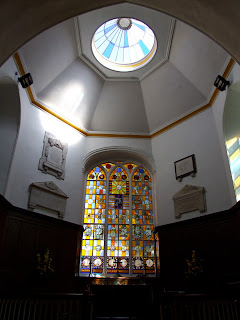 The interior of Saint Nicholas' Church
Saint Patrick’s Roman Catholic church was originally built on the site of an old shed were Catholics were meeting regularly for mass. That building served the needs of the people for nearly a century and the present building was constructed and completed in 1847. It is an impressive church in the Gothic style. The exterior is said to have been modeled on King’s College chapel in Cambridge and the interior on Exeter Cathedral. It has a fine interior with impressive, glittering mosaics on the sanctuary walls and an unadulterated altar and reredos executed by a pupil of Pugin. It’s something of a relief to see a church that has not been butchered in the style of Vatican II. 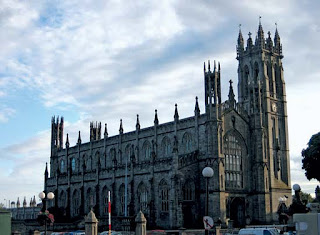 Saint Patrick's Church
Ladywell in Dundalk is a well maintained well and enclosure looked after by the local community and the local authority. From the road it is situated down a long track down to a flat area surrounded by a couple of houses. Even though you are in the full view of the occupants, it still feels private, quiet and peaceful here. The well was once surrounded in a very dramatic way by tall, thin trees which no doubt added to its mystique. In the early 1900’s, along with Saint Brigid’s well, it was one of the best known wells of the north-east of Ireland. 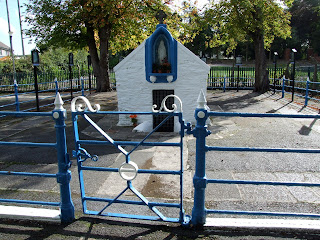 Our Lady's Well
The well house is the original structure apart from the cross over the entrance; although the tarmacadam surrounding the whole well site has removed any vestige of the grass plain that was once here. Modern stations of the cross have also been erected around the well along with railings to act as an enclosure. The steps down to the well itself are also a recent addition. 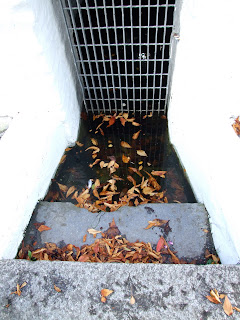 The steps down to the well
It’s somewhat hard to see but I suspect that the well is deep, as a small metal fence structure has been placed over the entrance -  possibly to keep pets and rubbish out of it too. Its waters are clean despite the gathering of turning leaves on a windy day and the space around the well affords good room to make rounds. The pattern is held on this site on 15th August -  the feast of the Assumption. On the eve of the feast at 10.45pm the well is blessed followed by a Rosary Procession. The next morning, at a variable time, a mass is said followed by another procession. In the past this well was said to be dry for 364 days in the year and that the water only magically appeared on the feast of the Assumption. Today the well is practically brimming over and it’s well past the feast! Locals say that the well level rises during the feast of the Assumption; other locals say a pump is turned on in one of the adjoining houses to make the water rise! Its waters are said to be a powerful ward against evil. 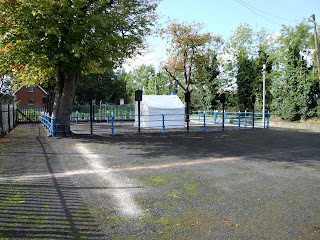 The well enclosure
Pray for the healing of the wounds of political division and religious discrimination and for all those who have been effected by the horrors of terrorism on this island.
God most High, whose handmaid bore the Word made flesh: visit us with your Holy Spirit, overshadow us by your power and strengthen us to walk with Mary the joyful path of obedience and so bring forth the fruit of holiness; through Jesus Christ our Lord.
Amen. 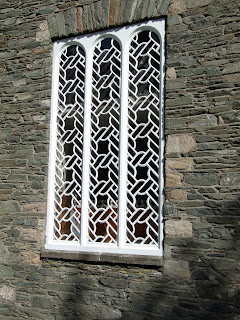 The unusual Celtic knot work tracery on the windows of Saint Nicholas' Church
How to find it:
Access to the well is easiest from the Dublin Road (N1). The well is clearly sign posted with two white pillars with blue painted tops and a blue iron gate. Walk down the long, narrow lane until you reach the flat open area where the well is. It’s best to park in Prioriland Gardens across the road from the well entrance.
Posted by Adomnán at 12:53 PM