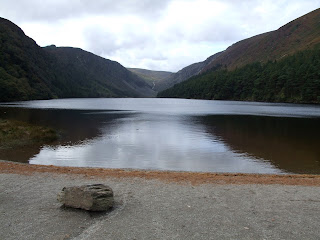 The upper lake
Glendalough is somewhere that I keep returning to. As a lover of place, I find it hard to keep away from this sacred space that resides so close to the capital city and yet spiritually so far from all its hustle and bustle. It rests quietly in a deep valley in the Wicklow mountains with two lakes and the remains of small churches, a round tower, ballaun stones and large ancient stone crosses.  It is an area of outstanding natural beauty and if you are lucky enough, and quiet enough and there at just the right time, you can see a whole cross-section of Irish wildlife. Even in the depths of winter this place can be stunningly beautiful, but when the mist descends you will struggle to see three feet in front of you. 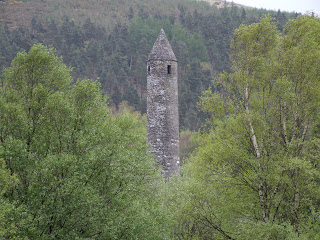 The round tower
There are two ways to approach Glendalough’s monastic site. You can park beside the Information Centre and cross the bridge by the labyrinth, travel down the path to the right and cross the bridge back over to the settlement, or you can enter the monastic settlement through the impressive stone archways that stretch over the uneven stone street. If you choose the latter point of entry be aware that you will have an experience akin to what medieval pilgrims once faced here. Not only will you find the racket of Babel as twenty different tour guides from twenty different countries direct the masses through the settlement, but you will also be faced with the hawkers selling various plastic trinkets from a factory in China. I rarely ever enter by this route: although in winter this area is deserted. 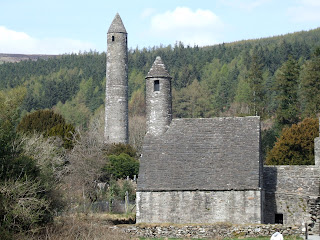 The 'monastic city'
The ‘monastic city’, originally founded by Saint Kevin in the sixth century, has an impressive thirty meter high, fully intact round tower. Below it there are various other buildings and church ruins dating from the eleventh century, but by far the most impressive is Saint Kevin’s Church, commonly called ‘Kevin’s Kitchen’.  This is a little barrel-vaulted church with a miniature round tower belfry. Nearby all of these churches is a seventh century stone cross which tourists are told is a wishing stone -  it was never a wishing stone! 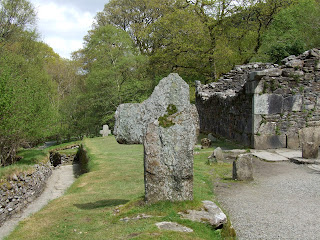 Reefert Church with ancient Irish crosses
There are a number of other very important church ruins in the area. Reefert church close to the upper lake is said to be the burial place of some of Ireland’s ancient kings. The site itself dates from the eleventh century. From the same period, but in the opposite direction near Laragh are the ruins of Trinity church and Saint Saviour’s church. 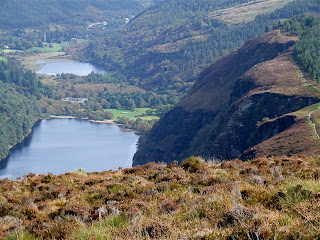 The view from the ridge walk
There are many walks in this area and you really must try at the very least to do the most popular walk. Start at the monastic city and walk up past the lower lake to the upper lake and then back through the marsh to the monastic city again. There is also a walk known as the ‘ridge walk’. It’s demanding, but it is most certainly worth doing. Other walks are outlined at the information centre. 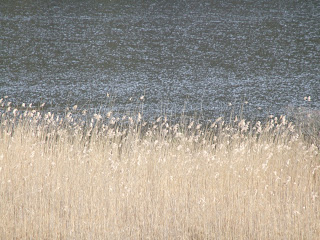 The lower lake
The whole site is associated strongly with Saint Kevin. You can visit his ‘bed’ and his ‘cell’ which is a flat area in the cliff face with a stone. Its more difficult to get to his cave, but with a keen eye you can spot it in the cliff face from the edge of the upper lake.  Saint Kevin’s birth was surrounded by both mystery and miracle. His mother supposedly had no pain in childbirth and shortly after the birth, she brought her son to Saint Cronan of Lienster to be baptized. On baptizing the child he had a vision of angels who held lit tapers for Kevin, indicating to Saint Cronan that this child was to be very special. At the age of seven, his mother sent him to a community of monks to be taught and ‘instructed in manners’. He remained with them until he was old enough to be ordained and after his ordination he decided to forsake the world and become a hermit. 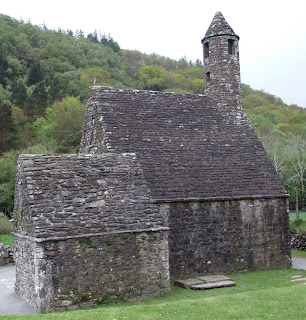 Saint Kevin's 'kitchen'!
The reality of the situation is probably that Kevin was a little odd.  He chose a very extreme form of celtic spirituality and practice. He was said to read his Hours waist deep in the cold waters of the lake. It has been fairly well documented in local oral tradition and in medieval writings on the saint that he was no great socialite. In fact, he positively hated company. In spite of this, his way of life seemed to attract people to him in their thousands. Maybe God has a terribly cruel sense of humour, but for Kevin this was a difficult cross to bear. Tales are told of Kevin managing to be so still and so engrossed in prayer that over time a blackbird managed to build its nest in his open hand. There are other tales too - some none too pleasant, of Kevin trying to fight off the unwanted advances of a keen girl. She will not take no for an answer and Kevin is said to have made his way up into the solitude of his cave in the cliff to escape her advances. To his astonishment she followed him, but pushing her away she stumbled and fell down the cliff and died in the shallow waters of the lake beneath. But just as there are tales told of Saint kevin’s dislike of peoples’ attentions, there are also tales of Saint Kevin giving people the attention and help that they require. There are three stones by the upper lake which are said to be witches that Kevin had turned to stone in his rage. The story goes that a chieftan brought his new born son to Saint Kevin in desperation at having lost all of his other children to early death. As the chieftan approached Kevin with the child in his arms, the saint saw three evil witches bent on the destruction of the child. Kevin is said to have cast them out in anger and as their bodies landed by the lake they turned to stone. 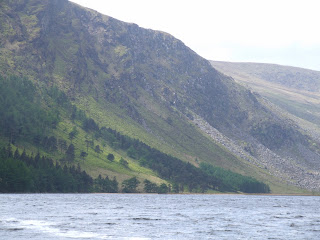 View at the upper lake
Despite his longing to be alone, Kevin found that God had a habit of pestering him to leave his solitude and preach and live the Gospel among people. At this Kevin was displeased, but he would do it grudgingly, and slowly, but surely return to his old solitary haunts. After spending another while in this manner, again angels from God, otters sent from God and even annoying farmers would come and remind Kevin that he could not live in solitude forever. Oddly enough this area is still a place of solitude for many thousands. There are retreat centres dotted all over the area and you can spend time here getting away from it all and soaking in the unspoiled beauty of the area. Here many batteries have been recharged in keeping with the tradition of Saint Kevin’s austere, self imposed solitude.
There is a strange and recurring story connected to many Irish saints that tells of the banishing of monsters and in particular worms, from lakes and rivers. Apparently in Kevin’s case, the worm lived in the lower lake and terrorized dogs, men and cattle alike! Unlike all of the other stories of other saints and ‘the worm’, Kevin does not destroy it, but instead banishes it to the upper lake and then he blessed the waters of the lower lake so that the sick could come to it and be cured.  There are also trout in the lakes and if you are lucky enough to spot one of them it is considered to be either a visitation from God or a sign of God’s presence. This is a very strange tradition rather specific to early Irish Christianity, which I will say a little more about in later blog posts, as they are directly associated with some wells. 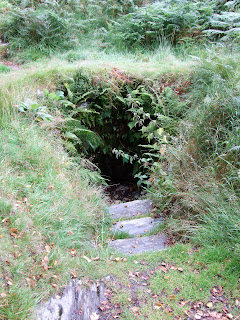 Saint Kevin's well
Saint Kevin’s well is not marked on the tourist maps that you get in the information centre and you won’t find it marked on any of the maps on websites about the area. In fact, very few people know about the well. It’s in a bit of a sorry state, seasonally dry, messed about with and much stony rubbish deposited in its centre. It is an ancient structure contemporaneous to the monastic city church ruins, but the well itself is likely older and was said to be the baptismal site of Saint Kevin’s disciple who was called Solomon.
I suspect that the well has been dry for some time now and is more than simply seasonally effected. The rag tree has no rags hanging on it and there is no evidence to suggest that anyone has brought tokens of prayer and pilgrimage for a very long time. The track down from the path through the fern and bracken does suggest that some people do still come to see it though. The rag tree is a fairly new tree. I saw a photograph of it once dated from the 1990’s and it was very small then. Now it is large and possibly swallowing up a large amount of the water from the well making it’s appearance much less frequent. It would be rather sad to see this well disappear from both folk memory and from physical sight. Wells are often linked to, and very close to early or very important Christian settlements and it would be a great pity if this one vanished. I’m told that there is still a pilgrimage or pattern of sorts on his feast day, 3rd June. Perhaps in time, someone will deem it important enough to dig out the rubbish that fills the well proper, that water might be seen again. 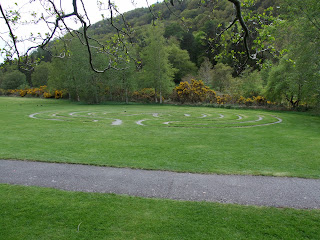 The labyrinth (the well is almost directly opposite this on the other side of the river)
God of the quiet hills and the busy city: we give you thanks for places of beauty that draw people close to you and we give you thanks for Saint Kevin of Glendalough who knew your presence with him in this place. Help us to know the renewing power of solitude and the deepening of our devotion that we may be empowered to live out the Gospel fully in the world; this we ask through Jesus Christ our Lord. Amen. 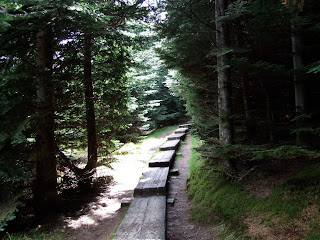 A path up through the forest
How to find it:
Leaving Dublin city travel down the N11 until you see the signs for Glendalough. Travel up through the hills and passing through a couple of villages, all the while following the signs. It’s well signposted and easily found. The well on the other hand is well hidden! Cross over the river from the Information/Visitors Centre and turn left. A little way along you will notice an area full of low ferns close to the river on your left. The well cannot be seen from the path, but following the tracks through the fern and bracken you will find it. It’s in line with the car park, so if you walk beyond the end of the car park you will have gone too far. 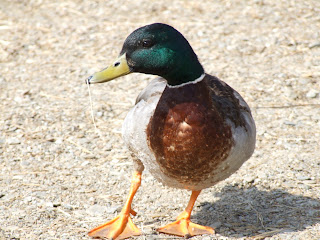 A duck poses at the upper lake
Posted by Adomnán at 1:43 AM