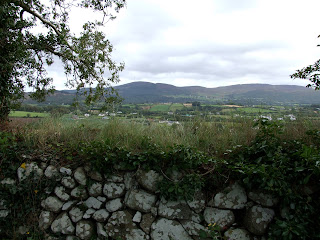 A view from Faughart shrine
It is important to know that there are two quite distinctly different sites in two very different locations. Faughart is an early Christian site in a beautiful and evocative setting and the birthplace of Saint Brigid in 453AD. In Kilkurry church nearby you can see a relic of Saint Brigid, reported to be a small bit of her skull! Faughart is a small mound on top of the hill overlooking Dundalk down into the bay, commanding a remarkable vantage point that was not missed by Edward Bruce (brother of Robert Bruce of Scotland) who fought here and who is also buried here. Edward Bruce took the title of King of Ireland and fought in the battle of Faughart in 1318 in which he was defeated and killed. There are numerous small monuments here, including a small stump from an ancient high cross, the ruins of an early Christian monastic settlement, a penitential station (Saint Brigid’s Stone) and a holy well. 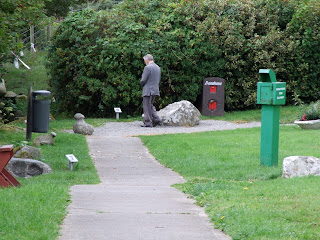 A pilgrim makes his rounds
The shrine is further down the hill and contains a number of scattered ballaun stones, a stream, two oratories and a mini shrine that echoes Lourdes, the crucifixion and a small fountain. The ballaun stones here are very curious and numerous. The first and most noticeable one has a white outline painted on it and it is rubbed first to indicate that you are beginning your pilgrimage or pattern. The next stone is the Kneeling stone with two rubbed holes in which two skinny knees could probably fit into. The Horseshoe stone is a place to pray for good fortune and a happy life (presumably now that your sins are forgiven having knelt in penitence at the Kneeling Stone!), then at the Anvil Stone pray for discipline in prayer and fasting (in more recent times this stone has become associated with the curing of stomach ulcers), then at the huge Chair Stone, wipe your eyes to cure spiritual blindness from it’s dipping shrine and sit or lie on it to remind yourself of your reliance upon God and then circle it three times to remind you of the Holy Trinity, and finally at the last ballaun, mark yourself with the sign of the cross from its collected water as a symbol of your baptism and new life before heading on your way again. People come here regularly to observe these rounds in this way even today. You can also pray ‘Saint Brigid’s Stream’, the text of which is on a board by the small stream, near the oratory. 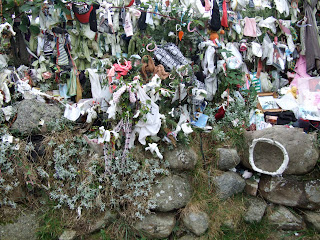 Offerings left at Faughart shrine
The rest of the site is interesting too. A path winds up from a large modern crucifixion scene in marble, past a small stream and a well cover with a Brigid’s cross on it.  If you follow the path it takes you up past a modern oratory (possibly built in the 1990’s from it’s design) and across the road through mature trees to a Lourdes type shrine. Further on up the top is a flat area with a small basin and a fountain running into it. Following the path back down again on the other side you pass a small oratory built in 1935 and you pass numerous plaster saints towards the exit. 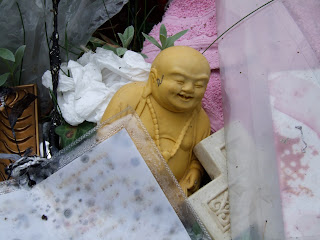 Covering all the bases!
Brigid was born in Faughart in 453 AD and she is said to have lived in the area until her Christian calling took her to Kildare. Her early life is surrounded by a certain amount of mystery in the sense that two accounts exist. One account suggests that Brigid’s father Dufach was a pagan chief and that her mother was a Christian, and it was under her tutelage and influence that Brigid became a Christian.  The other account is a little less flattering and suggests that Brigid’s mother, Brocessa, was a slave of Dufach. When she became pregnant by him she was sent away to give birth to the child in secret. When Brigid was old enough, Dufach went to Brocessa to claim the child as his slave. Bringing Brigid back he immediately set her to work caring for the cattle. He is said to have been frustrated at her generosity and the fact that she would give away free milk to the poor, however he was impressed by her hard working attitude and her commitment to her work. She is said to have asked for her freedom at the age of eighteen and Dufach granted her wish. She left him to become a nun and eventually she became the abbess of the convent in Kildare. There she worked in tending to the sick, the needs of the poor and elderly. 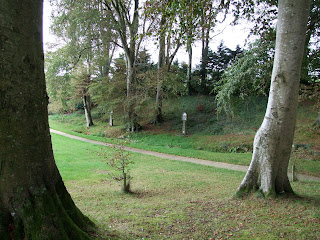 The path up through the woodlands of the upper section of the shrine
The most famous story associated with Brigid is the story of her cross. While an Abbess in Kildare she was given word that a local chieftain was gravely ill. She decided to go and visit him and sit with him. When she reached him she realized that he was dying and decided to remain there with him, sitting at his bedside. She prayed for a little while in silence and then she decided to speak to this pagan chieftain about her Christian faith. While doing so, she picked up some reeds on the floor (a common floor covering in those days) and began to knit them together. She explained to him the life of Jesus, his death and his resurrection and she explained what it meant to know God. All the while she was knitting the reeds together to form a cross. When she had finished speaking, she placed the cross into the hands of the dying chieftain. He opened his eyes and asked to be baptized and shortly after his baptism he passed into a deep state of unconsciousness and later died. Many other pagan followers were greatly impressed by Brigid’s compassion and the time that she was prepared to spend with this dying man, and on the basis of this event, many converted. 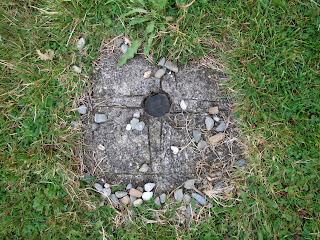 A Brigid's cross carved in a stone with a dipping shrine
Brigid is said to have done many more things, and also some very miraculous things and no doubt many of them were made up during the medieval period when they were wont to make up very dramatic and miraculous stories! But one thing is fairly certain and that is Brigid’s generosity. Early texts indicate that this was a trait of hers even in childhood and it was to be a mark of her particular charism for the rest of her life. There are many stories of her being generous with cheese, butter and milk which have led some to associate her more with the pagan god Bride of the Mantle – but these stories seem to have been very common around the time of the early Irish Christians in general; particularly stories about giving away dairy food or the overproduction of dairy food beyond what the religious community required. Brigid also went on to set up many other churches and communities and she was said to have been an accomplished preacher and a fine teacher of the Gospel. 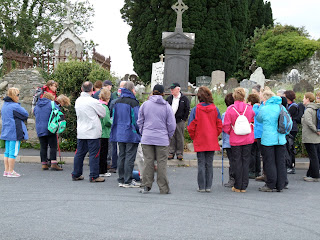 Tourists gather on Faughart hill
Away from the shrine, travelling up towards Faughart Hill the site looks like a small graveyard with a ruined church at its centre. It is a small site and the well is towards the back of the enclosure. Here is a conical housing for the well, reminiscent of beehive huts elsewhere in Ireland, with impressive steps down into it. On the day I visited the well was almost dry - there was a little water in it, enough to fill a few bottles and at the door of the well someone had left a little metal scoop to gather up the waters. 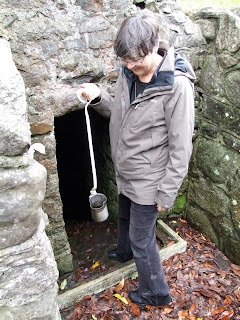 Getting water from the well
The area at the top of Faughart hill with the well also has other items of interest. Although there was an early Christian church here, nothing of it now remains; the church ruins on it today date from the medieval period.  However, there is a stump of what was once an Irish High Cross. It has been moved and placed in the centre of another curious circular mound, possibly the remains of a circular building. Today, pilgrims make a penance at this structure, circling the stone cross stump while praying and repenting for their sins, before going to the well. 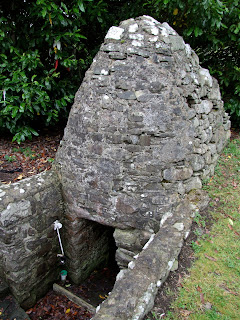 Saint Brigid's well
A common practice at Irish holy wells is to bring something along with you. At many wells you will find medals and all manner of religious materials, like prayer beads and crosses. Some people bring a rock to symbolize their sins and at the well they drop the rock as a sign of them being forgiven by God. At wells dedicated to Saint Brigid it is common to make a Brigid’s Cross and carry it with you for the journey and leave it at the well. On her feast day you are supposed to go out and make a number of Brigid’s Crosses and bring them into your home. Where possible I try to bring a Brigid’s Cross to every well site I visit. This is quite an old practice and still done by some people today, but sadly it is a practice that is slowly disappearing.  If you want to follow this practice at well and sacred sites, don’t be put off by the apparent complexity of the cross - it is in fact very easy to make and there are numerous videos and pages on the internet that will explain how to make a Brigid’s Cross. 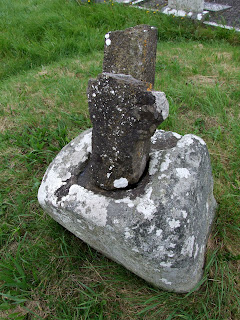 The remains of an old Irish cross
Give thanks for the life of Brigid and pray for the increase and deepening of the Christian faith on this island while at the birth place of its second patron saint. 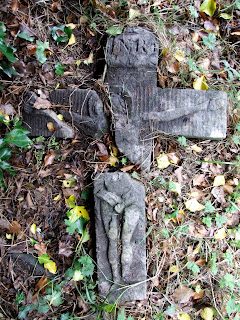 A carved crucifixion scene
Lord God, by the leadership of your blessed servant Brigid you strengthened the church in this land: as we give thanks for her life of devoted service, inspire us with new life, light, faith and hope and grant us the perseverance to serve you all our days; through Jesus Christ our Lord.
Amen. 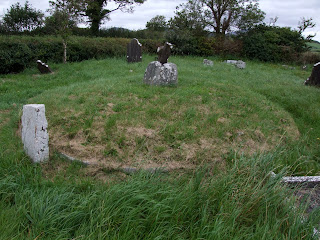 Mound of the penitents
How to find it:
Faughart shrine is found by following the signs of the motorway (or from Dundalk town) for ‘Dundalk North’. After passing under a low bridge on a tight bend the shrine is on the left hand side. Exiting the shrine car park, turn left and driving up the hill take an immediate right up towards Faughart Hill. It’s a very small site and looks like a graveyard from the road. There is a car park on the left immediately after it. 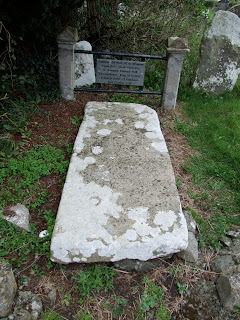 The grave of Edward Bruce
Posted by Adomnán at 3:37 AM