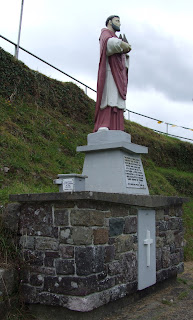 The one handed statue of Saint Moling and a poor box
This is a well on a substantial site in the middle of nowhere; but that is part of its rare beauty. Driving past the well you can see the back of the saint’s head from the road; his tonsure-cut peeping over an iron bar railing. The site is on the steep side of a valley overlooking the River Arrigle to the opposite and equally steep valley. It is an area of natural and stunning beauty and over the well grows a natural wonder too. 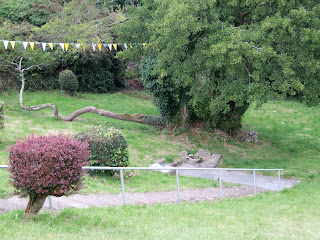 A view of the well and hazel tree from the top of the enclosure. the bunting is from the pattern celebrations
Looking down onto the site there are steep steps leading down to a magnificent hazel tree that grows directly over the well. Its branches are gnarled and one branch stretches out to one side providing a natural bench to sit on. It’s like a great welcoming arm curling around the well. At the back of the tree is a small mound on top of which people have left holy medals, candles, rosary beads and a few small statues. It’s all crowned with a small bit of slate incised with a cross. 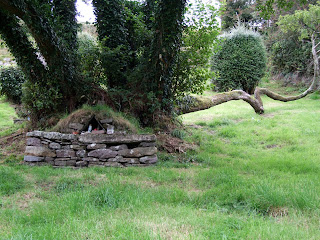 A makeshift altar of offerings behind the hazel tree
There is a small stone altar to the corner of the site and when I visited there was evidence that it had been used for an open air service, and someone had left roses in a set of vases. The tree at the back of the enclosure has a small white cross attached. The site used to have a number of these white crosses dotted around, where people would stop to say portions of the rosary. As far as I could see all but one of these crosses had now gone. 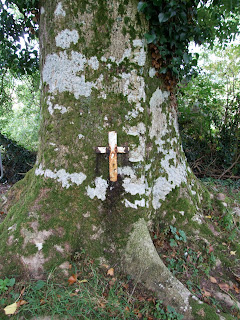 One of the stations marked by a white cross
The well has been tampered with a little. Today it comes out of a pipe that is partially covered by a slab of slate. There are signs that a structure above it is where the well used to be. A small basin to one side is where you are supposed to bathe your feet if you have blisters or sores, but the basin seems to be a part of the original well housing. Traditionally the well is said to cure sore throats rather than sore feet as Moling is said to have suffered from ulcers in the throat. 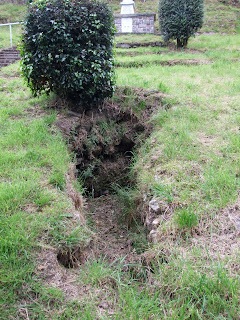 Possibly where the old well used to track through the ground
Saint Moling stands at the top of the site with a magnificent view of the valley and keeping every move at the well under his watchful eye. Lots of bunting had been left up, flapping in the wind from the pattern day celebrations on the feast day of Saint Moling (20th August). Saint Moling is very important to this entire area and was a monk in the seventh century, later becoming the Bishop of Ferns. There is another very significant well of his at his monastic site. 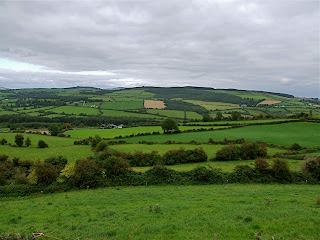 Saint Moling's view
Little is known of Moling’s early life, but he was thought to have been of noble birth. His father is said to have been a wealthy nobleman who seduced his wife’s sister. When she became pregnant, she fled in shame, arriving in the solitude of Mullennakill. From birth Moling is said to have stayed here, coming under the influence of Saint Brendan and this well is said to be the site of his baptism. He is said to have spent his early period after conversion in that rather austere Celtic manner by living for some time in a cave, but he also spent some time gaining an education in or near Glendalough. You can visit the cave across the road from the well, trekking through two large fields to the top of the hill. Moling built a small seventh century church here, but his main achievement was to be the construction of the monastery of Saint Mullins in Carlow. He is also attributed with making a copy of the Gospels and the impressive metalwork shrine which once held Moling’s Gospels can be seen in the Kildare Street section of the Dublin Museum. 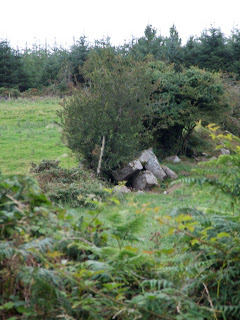 Saint Moling's Cave
Another great feat of Saint Moling was that he is said to have convinced Finaghta to renounce the crippling cattle tax which he levied on the men of Leinster. There had been a long tradition of the Kings of Meath extracting this tax as part of their tribute from the area. Many of the people of Leinster at the time lived in extreme poverty and the cattle tax was a taxation on the only thing they owned, sending them into further poverty or debt. 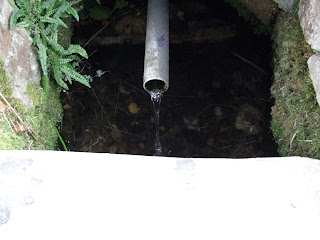 The well
Jerpoint Abbey is also close to this site; although not within walking distance unless you feel particularly energetic! It was a Cistercian foundation and the monks there are credited with creating the cult around the saint. The feast day of their founder (Saint Bernard of Clairvaux) was also 20th August, so perhaps they adopted this site and its saint for their own festivities and purposes. 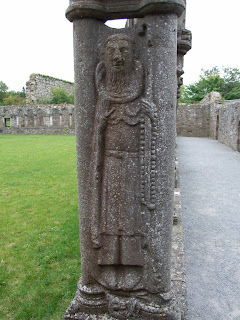 A carving of a monk at Jerpoint Abbey
A strange tradition persists relating to the hazel tree at the well. People gather bits of its fallen bark to bring into their homes as protection against fires. The story goes that a man wanted some firewood during a particularly bitter winter and he felt that the hazel tree offered a good measure of possible heat despite locals telling him he must not harm the hazel tree at the well. Taking his axe, he began to chop away at the tree, but he suddenly saw his own home further down the valley on fire. He stopped chopping at the tree and returned home as fast as he could, but on arriving at his house he found that all was well and there was no fire. Again he returned to the hazel tree at the well and began to chop at the tree and again he saw his house on fire. This time he ignored it and went on chopping the wood he wanted for his fire, but when he returned to his house he found that it had indeed been burned to the ground. The tree at this well is certainly impressive and beautiful and it adds to the special nature of this place.
There is another strange tradition that relates a story of a woman pestering Saint Moling for some words of wisdom and in a fit of ill temper he is said to have told her that a holy man and a fool would always be found in Mullennakill. She is said to have been satisfied with these words thinking them to be words of prophesy from the saint. Locals still insist that these words have been prophetic and that on any given day you can always find both in Mullennakill. The day I was there I was with a Dean. 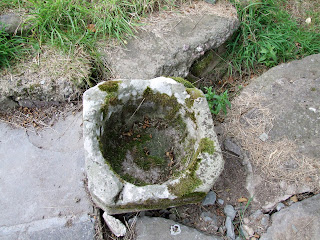 The basin for washing your feet
‘The Birth and Life of St. Moling’ translated from the original medieval manuscript by Whitely Stokes in 1907 is available to download from openlibrary.org or archive.org. It is a translation of the original Liber Flavus which was completed in the late fourteenth century. Sister Declan from the Bagnelstown Presentation Convent has carried out a significant survey of both the London and Brussels texts and she published a book, ‘St Moling Luachra’ helping to unlock the conventions of medieval hagiography that are present in the texts which can sometimes make it impenetrable to the casual reader. Sadly this book is now very difficult to find.
At this holy site connected to Saint Moling pray for the people of Mullennakill and for those who make their living off the land and those who live in poverty under the heavy burden of debt. 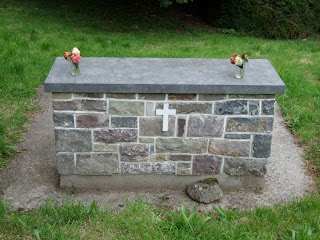 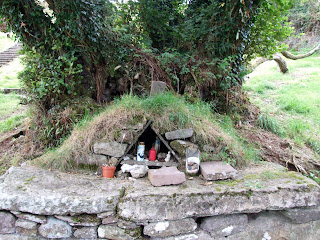 Detail of the small offerings behind the hazel tree
How to find it:
From the town of Thomastown in County Kilkenny follow the sign for the holy well. It’s clearly sign posted, but is further away from the signs than you might think! Drive down Mullennakill (sometimes spelt ‘Mullinakill’!) for what seems like miles (Chapel Hill is about half way to the well from Thomastown) until you see the well on the left. If you go as far as Glenpipe you have gone too far.
Posted by Adomnán at 1:06 PM