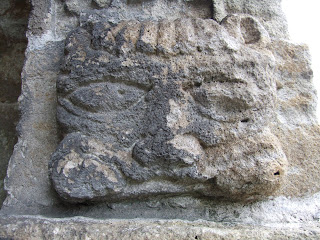 A zoomorphic image in the arch of St Lachtain's church

In the picturesque little village of Freshford in County Kilkenny lies a deep holy well dedicated to Saint Lachtain. The village is settled on a small park square with the remnants of an Irish high cross, but sadly all that is to be seen is a lump of worn stone. A little way down from the village square is the church of Saint Lachtain, built in 1731 and incorporating an ancient doorway portal from 1110. Although the actual church building is of a relatively late date, the site is of great historical significance in Ireland as a site of almost continuous use since its early foundation. 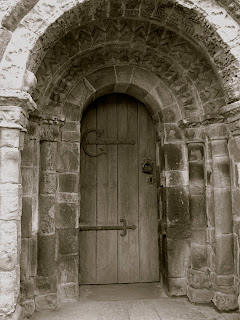 The original foundation at Freshford was settled some time in the seventh century before the death of Saint Lachtain in 672AD (some annals record the earlier date of 622AD, but this may be a confusion with the date of the foundation of the first church at Freshford) and very early historical records make many references to the existence of the site. It is mentioned later in various Annals dating from the twelfth and thirteenth century, where an attempt is clearly being made to have the site recognized as the Episcopal centre of the newly established diocese of Ossory. The mission met with failure with the site being recognized only a part of the temporalities of the See of Ossory in 1218. However, Bishop Hugh Mapleton held it in high esteem and built his Episcopal palace close by called Uppercourt. Uppercourt was to remain the favoured residence of the Bishop’s of Ossory until the 1550’s when Bishop John Bale was resident. This Bishop had a voracious reforming zeal which enraged the local population and in a single night they murdered five of his servants, forcing him to flee for his life. Since then, the building of Uppercourt has been in secular ownership. 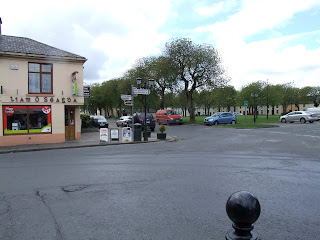 The village of Freshford

Today the church of Saint Lachtain is still in regular use and the nave of the church is thought to be built on the same foundation outline as the tenth century cell church (the second church to built on the site) which was built to house the relic of Saint Lachtain’s arm; a magnificent silver and gold reliquary which housed the saints forearm bones and which can be seen in the National Museum in Dublin. It’s nothing short of a miracle that the relic survived at all as the site was plundered numerous times by the Vikings and casual robbers, who repeatedly burned its books and plundered its silver and gold. The Franciscan’s moved the reliquary to County Kerry in the mid 1600’s where it was to stay for some time before being transferred into the care of the Museum in Dublin. The doorway to the church is the oldest surviving part of it, dating to 1110 and incorporating some zoomorphic figures, a rider on horseback and two ecclesiastical figures (both unidentified). The arch carries a prayer inscribed in Irish script: Pray for Niamh, daughter of Corc, and for Mathgamhan O Clearmaic for whom this church was made. Pray for Gille Mocholmoc for whom this church was made. Pray for Gille Mocholmoc O Ceannucain who made it. 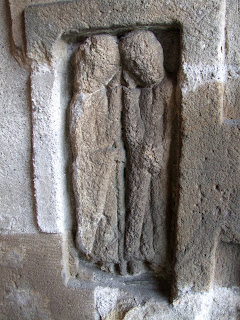 Two ecclesiastical figures in the arch

Saint Lachtain’s day is celebrated on 19th March. A native of Muskerry in County Cork and born into an illustrious family, Saint Lachtain’s arrival was shrouded in mystery in a vision given to Saint Molua while under the oversight of Saint Comgall of Bangor. It was said that Saint Molua was so disturbed by this vision, and in fear that it he had fantasised the whole thing himself, he never broke a smile until he heard of the child’s birth! Lachtains genealogy is confused, but it is generally regarded that he was of royal lineage. The earliest life of the saint (which only records his early years) is now lost, but various writers such as Colgan records a story from it regarding how the child in the womb appeared in a vision to a blind man by the name of Mohemeth to give him his sight. Other stories relating to Lachtain’s childhood portray him in the same vein as Jacob, Jeremiah and John the Baptist, sanctified before their birth - a common device used in early Irish Saint’s Life’s. Other miracles from his childhood relate how he healed himself of food poisoning, how he healed his mother of a terminal tumor and how he saved the cattle of the area from a terrible plague.

In later Life accounts of the saint we are told how he journeyed northward and went to study under the direction of Saint Comgall in Bangor, who placed him in the care of Saint Molua as his guardian and teacher. He remained here until the age of thirty, studying diligently and being highly proficient in his knowledge of the scriptures. After this period in Bangor, Lachtain set out to establish a number of religious foundations both in County Kilkenny and in County Cork. 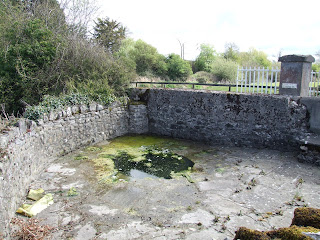 The much neglected holy well

The saint’s holy well is a short walk from the ecclesiastical site, set off slightly from the main road into the village. O’Hanlon records it as being in great disrepair and utterly neglected by the local people, but the same well is mentioned in the ancient Life of Saint Mochoemoc (an Abbott in the time of Saint Lachtain’s later years and patron saint of LIsmore) as being a place ‘sacred to the memory of Saint Lachtain’. Saint Lachtain died on the 19th March in 672AD and within a very short period of his death he was being venerated as a saint, recorded in the martyrology of AEngus of Culdee, the Martyrology of Tallaght, of Marianus O’Gorman, of Maguire, O’Clery’s, in the Calendar of Cashel, and more curiously the saint appears in the sanctorale of the Carthusian Order throughout Europe on the same date. There are a number of Holy Wells dedicated to Saint Lachtain throughout Ireland and all of them hold in common a belief that they cure paralytics and those ‘possessed by a diabolical agency’. The waters in the holy well at Freshford are considered beneficial for the blessing of cattle; possibly relating to an account in one of the Life’s which tells of the Saint’s gift of cattle to the people and of his love of dairy food. Saint Lachtain was also highly regarded as a broker of peace between warring factions and tribal scuffles, and was said to have been a keen defender of the interests of the people of Munster. In later martyrologies he is recorded as being a Bishop, but despite the record, it is a claim that is difficult to ascertain in truth. Overall, Lachtain’s life is one that tells of supreme sacrifice, leaving behind his royal rights to enter a life of self-giving and risking his life in peacemaking for the people he loved. A healer, a teacher and a man of prayer who travelled by faith the length and breath of Ireland, Saint Lachtain’s memory is firmly fixed in Freshford; a sleepy, peaceful little village in County Kilkenny. 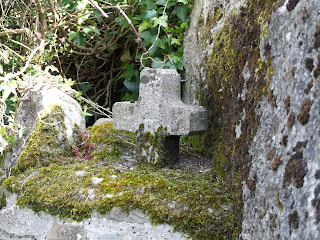 The modern, small cross at the well

At some point the holy well at Freshford has gone through very significant alteration, with a boundary wall now built to separate it from the surrounding farmer’s fields, and an iron gate encompassing a cross erected at its entrance. A Conservation Plan from 2004, typically makes no mention of the well at all. The holy well itself is very deep, but badly neglected. Its culverts have become blocked, so the water fills up over the top of the circular well housing and because of the lack of flow, much green algae has grown on the surface of the water. The rest of the well housing is in good condition, with a tiny stone cross in one corner. It is a simple layout and easy to make rounds, but the waters are far from inviting! Despite being on a main road into the village, it is a peaceful place with its own peculiar charm and sleepy nature. A much overlooked site that’s well worth the visit. 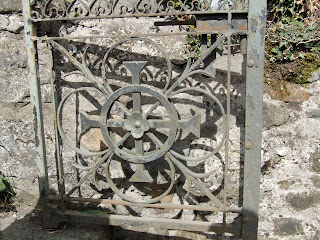 The iron gate at the entrance to the well

Lachtain, the Champion, loved
Humility, perfect and pure,
Stand through perpetual time
Did he in defence of the men of Munster.
Cumineus of Connor.

O thou who art heroic love, keep alive in our hearts that adventurous spirit which makes men scorn the way of safety, so that thy will be done. For so only, O Lord, shall we be worthy of those courageous souls who in every age have ventured all in obedience to thy call, and for whom the trumpets have sounded on the other side; through Jesus Christ our Lord.
Amen.
John H. Oldham 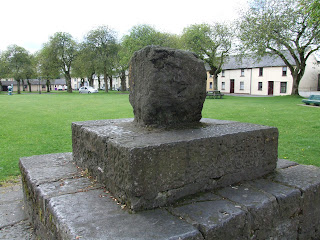 How to find it:
From Kilkenny heading out to the village of Freshford, the holy well is located around 200 metres before the village on the right hand side of the road. As you enter the village, the church is located down a road to the right off the main village green. 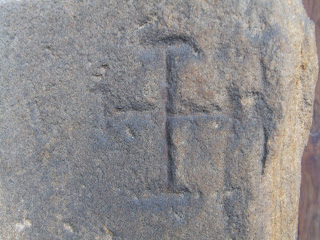 A cross inscribed in the doorway of the church