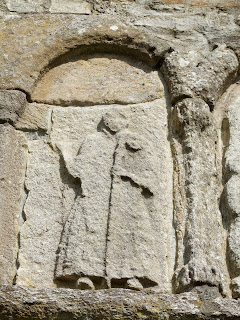 Ardmore is a beautiful and very picturesque village on the coast in County Waterford. On the west side of the village, on a slight slope up from Saint Paul’s Church (which houses a very fine early Christian font) is the ruin of the old cathedral dating to the twelfth century with fairly impressive external panels on the West wall which date from around the fourteenth century, an intact and imposing round tower and a small oratory dating from the eighth century thought to contain the remains of Saint Declan. 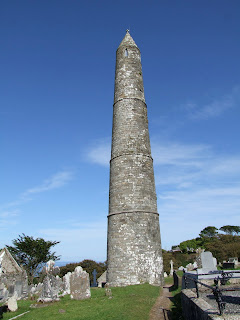 The round tower on the site of the Old Cathedral and Oratory.
Saint Declan, a prince of the tribe of the Decies, arrived in Ireland before Saint Patrick and is regarded as the first person to bring Christianity to Ireland. His mission had only local success, but he did found a significant monastery in Ardmore, so it seems rather fitting to begin here where it all once began and to pay a visit to a well that oddly is not on the main ecclesiastical site but to the east of the village centre, up along the early stages of the path to the cliffs. 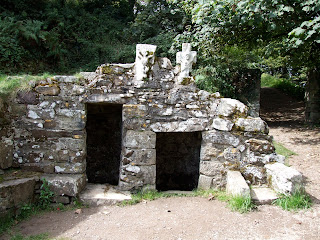 Saint Declan's Well
The well itself is in a small, flattened area at the very beginning of the cliffs that tower over the village and spread out in a horseshoe shape away from the main bay. It was thought that this area was somewhere that Declan liked to sit and pray and reflect. There are the remains of a very early church that has a capstone on the remains of the east wall full of the scratches of people marking crosses on their pattern observance. There is also a well with two points of access, capped by a large grouping of stones with two crosses above it. There were originally three crosses – the one on the left representing the unrepentant thief, the central cross representing Christ and the cross on the right representing the repentant thief. Sadly, the cross which was on the left has gone astray; possibly stolen, but some locals suggest it may have broken off and simply rolled off into the sea below. 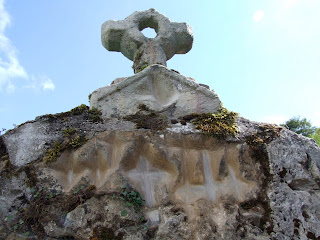 The east end of the ruined church at the well, marked with rubbed crosses from pilgrims on pattern.
This area is a very beautiful and peaceful place and as a well site it has a very authentic feel, with its old ruined church and very early cross carvings over the well itself. Its waters are clear and refreshing and there are a few places to sit and contemplate and pray. The well is normally accredited with curative properties for eyesight which seems suitable enough seeing this was the first place in Ireland for the light of the Gospel to appear. 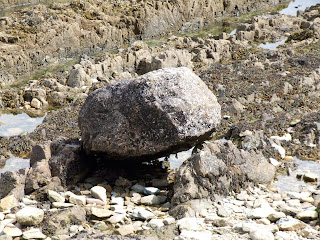 Saint Declan's stone on Ardmore beach
Saint Declan has a great many myths and stories relating to his time in Ireland despite the fact that his mission was very much limited to a particular area. On the beach near the village you can see Saint Declan’s stone. A monk Runanus, travelling with Declan back from a trip to Wales, forgot to bring Declan's sacred golden bell. The legend goes that a rock bore the sacred object back to Ardmore, miraculously floating upon the waves. During the pattern, which is observed on the feast day of the saint (24th July), pilgrims crawl under the stone (which is supported by two smaller stones) as a cure for arthritis. I dare say that if you can crawl under the low stone and scrape through the watery pool underneath it, there is little wrong with you anyway! There is also a story that the stone should not be approached by the unworthy and an accompanying morality tale about some unfortunate who tried to crawl under the stone to be cured of her arthritis. She is said to have been somewhat notorious in the village and God, knowing her secret sins as well as her public ones would not permit the stone to be marred and so it magically lowered as she was making her way under it and she became stuck. The story goes that it took two men to pull her back out from under it by her feet.
Another popular story connected with Saint Declan is the story of how he came to be here which is also the source of one of the symbols connected with the saint and can be seen in many pictures and carvings of him. After travelling to Rome to be consecrated Bishop by Saint Hilary, Declan received a gift from heaven while celebrating the Eucharist. A golden bell was given to him and later, following that bell he arrived at Ardmore, taking this to be a sign that he should establish his monastery there.
Today the people of Ardmore still observe the pattern on the feast day of the saint with concerts, lectures, sports events, crafts, markets, storytelling, guided tours and even fireworks. Well worth a visit! 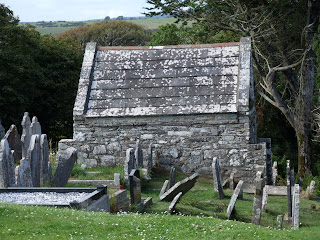 Saint Declan's Oratory
While at the well, you may wish to remember your own baptism at this place where it all began for Christianity in Ireland. You may wish to say a prayer for the many churches throughout this land and for all Christians in their walk with God. You may also want to keep in a special remembrance those who suffer from problems relating to sight, and maybe even those who suffer from a lack of seeing in a less than physical sense too.
Light of all who sit in darkness: we remember with thanksgiving your servant Saint Declan, and all those who spread the light of the Gospel in this land. Strengthen all those who bear witness to Christ and guide us this and every day in the right way.
Amen. 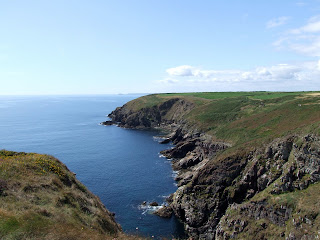 The cliffs at Ardmore
How to find it:
On the main road from Youghal to Dungarvan (N25) there is a well signposted route to Ardmore (a brown tourist/cultural site sign) on the right. Follow the road towards the village. Before arriving at the main street of the village turn right up Tower Hill towards the ancient ecclesiastical site (you can’t miss it). To find the well, travel down the main street of the town and up Cliff Road. The well is situated on the early part of the track just beyond the Cliff Hotel.