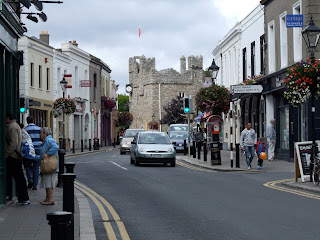 The town of Dalkey

Dalkey is a small coastal town in County Dublin.  The area has been inhabited since Neolithic times, but reached an incredible level of importance during the medieval period as a major Irish port. It has a number of standing stones dotted throughout the town, a couple of small castles and the ruins of a ninth century church dedicated to Saint Begnet. 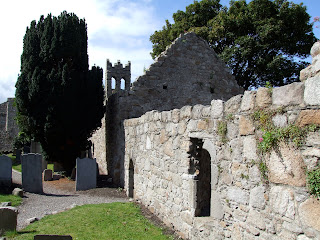 The ninth century church of Saint Begnet in the town of Dalkey
Much of the story of Saint Begnet is lost in the mists of history. Her name is recorded in the eleventh century genealogies of Irish saints as Becnat, daughter of Colman who was the son of an aristocratic family of Dal Messin Corb. This family ruled Leinster, but in 700AD lost their power and were confined mainly to the Wicklow mountains. Saint Kevin of Glendalough was also thought to be from the same family line and interestingly the churches of Begnet eventually come under the control and protection of the great monastery of Glendalough.
Saint Begnet fled to Britain – possibly to escape an arranged marriage – where she was converted. It is said that she spent some time on an island off the Northumberland coast, before returning to Ireland on a number of missionary journeys, concentrated in the area of Dalkey. She is now the patron saint of the town and her feast day is on 12th November, as is recorded in the medieval Book of Obits of Christ Church Cathedral. You can see a somewhat curious ‘icon’ of Saint Begnet in the Church of the Assumption in the centre of the town in which she sports a fancy gold bangle which legend has it was given to her by an angel on her conversion. A bangle was said to have been preserved for some time as a relic of Saint Begnet in Saint Bee's convent in Britain. 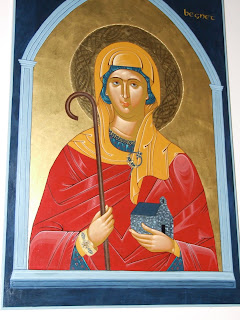 Saint Begnet
The well is on Dalkey Island. A quick phone call to a ferryman and I was instructed to meet him at Coliemore Harbour in one hour. Coliemore Harbour is a steep enough descent from the town. It was built in 1868 and it’s a rather inviting, sleepy little harbour. The ferryman is there, so I step onto the small boat and make my way across the short but very deep stretch of water towards Dalkey Island. 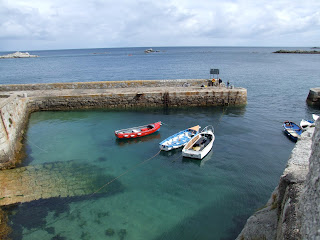 Coliemore Harbour
Dalkey Island has an incredibly chequered history for a place that is so small. The island has been inhabited for an amazingly long time. A skull was found, filled with periwinkle shells, during an excavation in the 1960’s which was dated to 2,500BC. Both Mesolithic and Neolithic remains have been found, along with pottery and glass fragments from slightly later periods.
The church on the island is dedicated to Saint Begnet. The church here is in fact later than the ruin in the town, dating from the eleventh century. The fireplace in it is from the time of the fort and Martello tower, when a few extra windows were also added. However the original windows are arranged in a very strange way and it’s thought that it relates to the keeping of a solar calendar. Behind the church is a curious stone, marked with a cross. It’s thought that this stone may have been a very ancient pagan stone that has been ‘Christianized’. It has evidence of having a carved circle on it but sadly it is now weathered so much that it is difficult to make out the shapes on it. 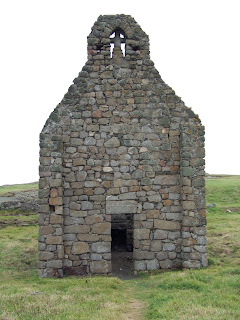 The eleventh century church of Saint Begnet on Dalkey Island
Tradition has it that Begnet carried out one of her many missions on this island in the early seventh century, baptizing the new converts in the well near the shore. Today the well is associated with the curing of scurvy, which seems appropriate being the point of the passage of so many sailors and merchants down through the years. The holy well is in fair condition and whitewashed, so it can be easily seen. It has evidence of once having a little gate at the front of it -  but this has long since rusted away. The construction around it today is modern, but to the left of the well entrance there does appear to be some original stone work of a very rough-hewn style. The water rises into a small basin and overflows through a metal pipe into the sea. It’s not an easy well to find as it’s slightly hidden on the coastline. The best way to find it is to try and spot it before you make your landing on the island. It is easily spotted from a boat. It’s a sheltered and quiet spot, where the waves lap gently and the seaweed swirls around the rocks. It isn’t possible to make rounds at this well, but there are plenty of rocks to sit on and admire the view and take in the benefits of the sea air. You may wish to pray for the safety of all those who make their living on the sea.
Lord Jesus Christ, at whose word the winds and waves calmed, grant to all who share in the faithful heritage of your servant Saint Begnet, a calmness of spirit and stillness of mind, that we may know and serve you in peace all the days of our lives.
Amen. 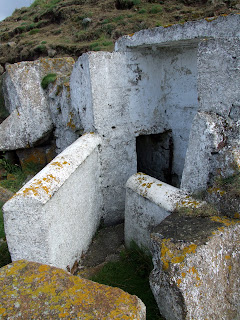 Saint Begnet's Well
The Vikings are supposed to have raided the Christian settlement on the island and the island was put to use as a storage point for slaves. The surrounding tides and currents are extremely dangerous and anyone trying to swim the short distance to the shore of Dalkey would need to be a very strong swimmer indeed in order to make it there alive.
In the eighteenth century a festival was kept on the island that culminated in the crowning of a mock King of Dalkey with these words, “I crown you, His facetious Majesty, [Name], King of Dalkey, Emperor of the Muglins, Prince of the Holy Island of Magee, Elector of Lambay and Ireland's Eye, Defender of his own faith and Respecter of all others, Sovereign of the illustrious Order of the Lobster and Periwinkle”. Records claim that 20,000 people attended the festivities, but it all came to an end in 1798, when a ban was placed on such gatherings due to the political concerns of the time.
On the south end of the island is a well preserved fort with three remaining canon battlements and a Martello tower erected to counter the threat of invasion from Napoleonic France. At this end of the island there are some cliffs -  not very high, but not ones you would like to fall over! There are rabbit holes everywhere here and you can easily fall over and if you aren’t careful, you could break an ankle. Along with the brown rabbits you will see a small herd of feral goats, numerous terns, seagulls, cormorants and a seal or two. 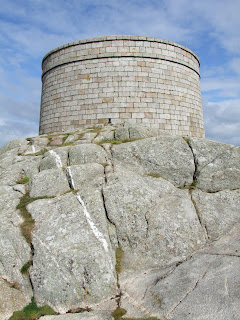 The Martello Tower
Dalkey Island is beautiful and well worth a visit, but do be warned, the island is very exposed so you really must bring some sort of coat. Heavy shoes are also essential. You could quite easily spend a couple of hours on the island and for somewhere so close to Dublin city it is remarkably unspoilt.
Saint Begnet’s church in Dalkey village is also worth visiting. It is marked on the tourist map from the tourist centre and access to it is gained through the tourist centre. There are a few items of interest, including a slab stone and a few ancient pagan stones inscribed with crosses. It's a reasonably peaceful place, but it is still on the street, but within the walls of the ruin it's actually quiet enough. Cardinal John Henry Newman spent the summer of 1854 in Dalkey and he visited the well on Dalkey Island and it's church. Soon, no doubt, he too will be a saint and his name will join the ranks of Begnet and Kevin.
Lord, may you support us all the day long, till the shades lengthen and the evening comes and the busy world is hushed and the fever of life is over and our work is done; then in your mercy may you give us a safe lodging and a holy rest and peace at the last.
Amen.
Cardinal John Henry Newman 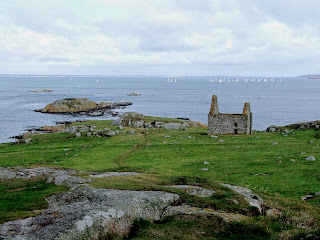 Dalkey Island
How to find it:
From the town centre travel down Coliemore Road towards Coliemore Harbour. The telephone number for the ferryman is painted on the wall! You can also hire a boat from Bullock Harbour at the north end of the town. As you approach the island the well is whitewashed, so it can be spotted easily from the sea. It’s quite close to the coastline, between the church and Martello tower. 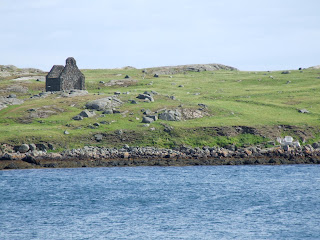