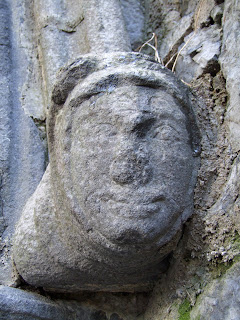 Gowran is a little picturesque village in County Kilkenny with a race course nearby. It was at one time the royal residency of the Kings of Ossory before the Norman invasions. The town has the remains of a fourteenth century castle that was built by James Butler, the third Earl of Ormonde and Saint Mary’s Collegiate Church dating from the fourteenth century and now a National Monument of Ireland. 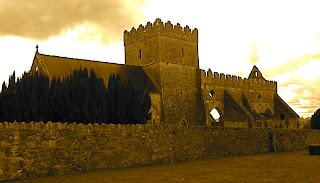 Saint Mary’s Collegiate Church was served by a collection of clerics who lived in a house beside the church (the house is no longer there).  The church had a long, wide aisled nave and a long chancel and contains many important tombs of various dignitaries and knights with elaborate carvings. Many of the upper portions of the church, including the nave battlements and tower, were added much later. The nave used to be a Church of Ireland parish, but has now been converted into a visitors centre. 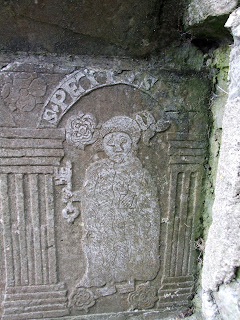 Saint Peter on a tomb in Saint Mary's Church

The holy well is on the far side of the village near the race course. Nobody knows the dedication of this well, even though it is mentioned in a number of books and marked on various old maps of the village and area. At one time it was labeled ‘Bastionfort Well’ and at other times it simply had the label ‘Spring’; however, older records mark it simply as ‘Holy Well’. In most cases were the dedication has been forgotten holy wells are simply called ‘Holy Well’ or ‘Trinity Well’. It is possible that if there had been an association with St Mary’s that this well would have carried the dedication of the Blessed Virgin, but there is no supporting evidence for this. Despite a lack of evidence I have labeled this well as ‘Our Lady’s Well’ in honour of the Virgin. It could be that I am trumping some poor forgotten saint, but hopefully they won’t mind too much! 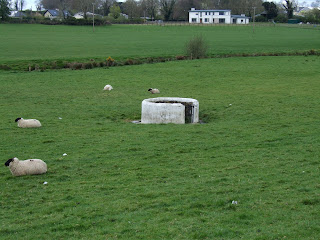 The well is surrounded by a waist-high concrete wall and is in-filled with many rocks. It sits in the middle of a field and has a small gate to the front of the well housing. It’s waters are cold and clear and run into a channel out the back of the well housing, over a stone slab and into an underground culvert of ancient structure that drains into a nearby stream. Quite why this well is drained into an underground culvert is something of a mystery as the lay of the land would mean the well would naturally drain into the nearby stream. Whatever the case may be, this well is holding its secrets and likely will for a very long time. It is nevertheless a beautiful well in a beautiful spot. 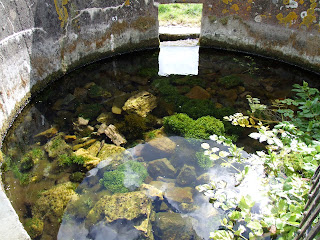 It is entirely right to call you blessed, you who gave birth to God, ever blessed and most innocent the Mother of our God. We praise and extol you, true Mother of God more worthy of honour than the cherubim, greater in glory than the seraphim – the bearer of the eternal Word.
Antiphon from the Byzantine Book of Hours. 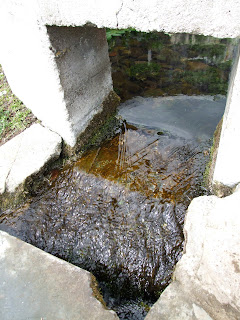 The overflow into the underground culvert

How to find it:
As you approach the village of Gowran from the side with Saint Mary’s Collegiate Church and enter the village, on the main road out to the right is a field surrounded by whitewashed posts. In the centre of this field is the whitewashed structure of the well house. 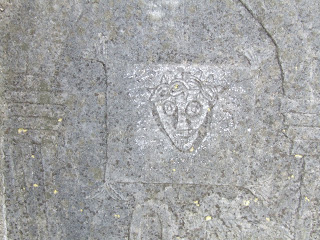