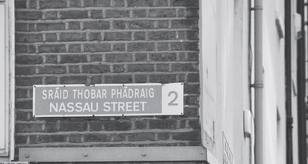 The street sign that reveals the well's presence
Dublin has a well that has not been seen by many people for many decades. Nassau Street in Dublin city centre used to have a different name - the Street of Saint Patrick’s Well (Sráid Thobar Phádraig). Its Irish name still exists beneath the modern Nassau Street sign. Saint Patrick’s Cathedral claims that the well at which Saint Patrick baptized his new converts was in the grounds of the park beside the cathedral. This is opiate for the tourists. The well was, is and ever shall be on Nassau Street. It is a protected structure, hidden from view and locked up tight!
At the side entrance to Trinity College, the pillar on the left hand side as you face the entrance is situated over the present well house. The outer part of the well house has a modern concrete structure, probably dating to the 1950’s, but into the well house only a few steps and the red brick Georgian structure begins to reveal itself. The air becomes damp and the brick work looks crumbly. In the dark, at the bottom of a few steps is a long oval basin which is the well, and today it is full of water! 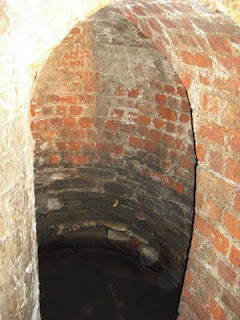 Saint Patrick's Holy Well
Saint Patrick’s Well at Trinity College dried up when Jonathon Swift was Dean of Saint Patrick’s Cathedral. He wrote a satirical poem about how the students, who were known for their drunkenness and revelry, had even drunk the well dry. For many years the well remained dry and soon it was forgotten, neglected, locked up and built on top of. It’s been locked up and hidden for quite some time now and very few people have seen it. A survey was carried out on the well in 2009 which revealed some structural concerns, but I don’t think there are any plans to conserve it and there are no plans to reopen it. So the primary baptismal site of Patrick’s first converts for the city of Dublin maintains its still and silent vigil, hidden from all view, its waters only moved by the vibration of traffic.
Today the well has water in it again, it is no longer dry, but Dublin’s most famous well - indeed, one of Ireland’s most famous holy wells remains closed to the public, hidden from view and its crumbling gate firmly locked. How long will they keep this a secret?
Posted by Adomnán at 11:28 AM