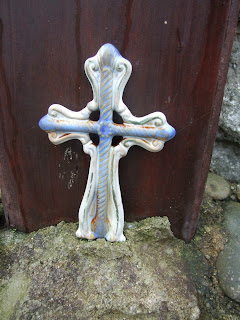 A cross left by a pilgrim


On a cold and wintery morning with the wind howling like a banshee and the waves on the lough in Strangford looking decided unhappy, I still managed by means of miracle or saintly intervention to cross on the ferry from Portaferry to the other side. From here I travelled down Strangford Road and before I came into the picturesque town of Ardglass, I noticed a ruined church on a hill and I couldn’t help but let curiosity get the better of me. 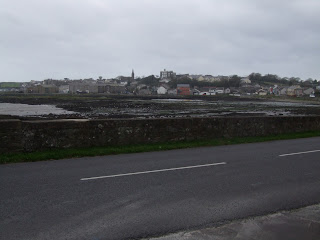 The view over the town of Ardglass
Ardtole is a small hamlet, mainly rural and part of the area of Lecale. Lecale is centred on Downpatrick and the name comes from the old Irish ‘Leath Cathail’ meaning Cathal’s Portion; Cathal was a prince of Uladh around 700AD. Ardtole has a large hill with a ruined church placed right at the very top. The ruin isn’t particularly old; it was the parish church of the area dedicated to Saint Nicholas and the present ruins date back to the fifteenth century. A few ballaun stones are also scattered around the outside of the church. There are signs of ruined stones indicating an even larger and older church on the site. No one is certain what happened to the older church, but this church was said to have been deliberately burned to the ground by the MacCartan family to save a loss of face within the local community. The MacCartan chief of Ardglass was not liked by the locals of Ardtole and when they found him outside the church so drunk he couldn’t stand, they decided to shame him and tied his hair to briars. When he awoke he was unable to get up and the townspeople mocked him. In an act of vengeance the MacCartan clan mustered forces, went to the top of the hill to the church and burnt it down in rage. This story is said to have been the inspiration for Jonathan Swift’s story in ‘Gulliver’s Travels’. 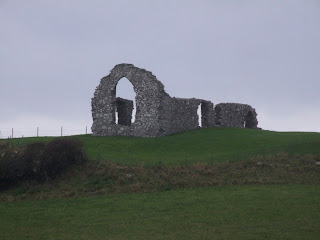 The church ruins on the hill in Ardtole
There are records of a carved right hand to the side of the altar reredos in stone, but when I was there no sign of this was visible anymore. This feature can be seen in other Anglo-Irish parish churches and is thought to represent the Aaronic blessing. It may have been a loose, fully carved hand and as a result it has been moved or stolen. A cross slab that used to reside at the ruined church has been moved to the nearby local parish church, but the hand is not in their possession. 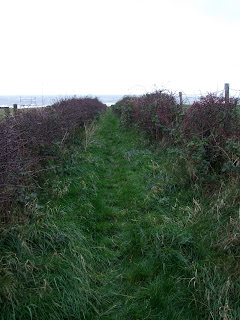 The lane down to the well from the road
While near the church, a local man gave me further information on a nearby holy well. He called it ‘Saint Patrick’s well’, but was unable to give me any further information on why it was dedicated to Saint Patrick. It seems a little strange that a well beside a church dedicated to Saint Nicholas has a dedication to Saint Patrick instead. I did wonder at the time if this was not a more recent innovation. This area is however the place where Saint Patrick both began his mission in Ireland and the area when he ended his mission and where he is buried, so it’s not entirely surprising that the well in the area is dedicated to him. It may have served as a baptismal site for the earlier church on the hill before the fifteenth century parish of Saint Nicholas; but there are little records of the previous church. 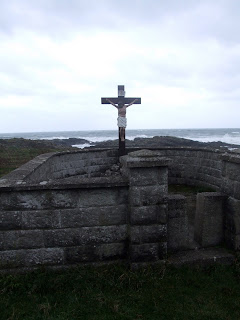 The holy well
Travelling backwards and forwards through the narrow country lanes I eventually noticed a small hedged lane down to the sea shore. Following it led me to the well, enclosed in a modern brick structure, with a great pile of stones topped by a significant crucifix. The well is surrounded by concrete and a few older stones and there is a small dipping well right beside the main chamber. The main well isn't that deep and has a lot of sea water in it, but the small dipping well looked deep and I certainly couldn’t feel the bottom and on the bitter day I was there I certainly wasn’t going to wait around for long. The well is said to be a cure for all manner of ill. The holy well is part of the walker’s route called ‘The Lecale Way’ which is a forty mile trek throughout the area. 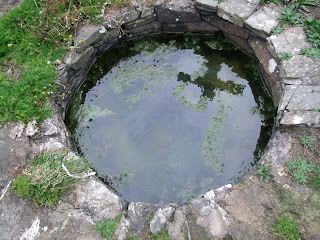 The main well
From 1847 to 1881, records tell of 132 ships which sank off this coast. These are truly treacherous waters and it is hardly surprising then that the local parish church is dedicated to Saint Nicholas, the help of sailors. On a beautiful day this area must be stunning, but on the windswept day I visited it served as a reminder of all who make their living on the sea and just how dangerous it can be. 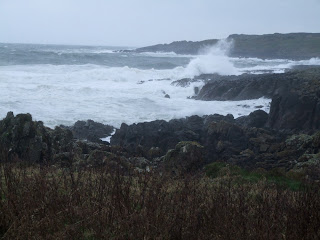 The surging sea
Blessed are all Thy Saints, O God and King, who have travelled over the tempestuous sea of this life and have made the harbour of peace and felicity. Watch over us who are still on our dangerous voyage; and remember such as lie exposed to the rough storms of trouble and temptations.
Frail is our vessel, and the ocean is wide; but as in Thy mercy Thou hast set our course, so steer the vessel of our life towards the everlasting shore of peace, and bring us at length to the quiet haven of our heart’s desire, where Thou, O God art blessed and livest and reignest for ever.
Amen.
Saint Augustine. 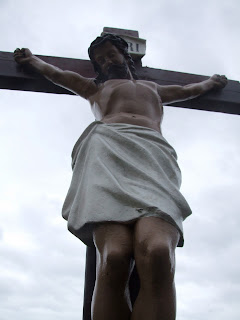 The imposing crucifix at the well
How to find it:
From Strangford Road heading towards Ardglass you will see the ruined church up the hill on the left. Take the left turn immediately before the hill with the church ruins. Follow this small lane as it bends around to the left and about halfway down this road on the right you will see a large aluminium farm gate over a narrow lane down to the sea shore. Follow this path to the shore and turn left and you can see the well and crucifix from here. 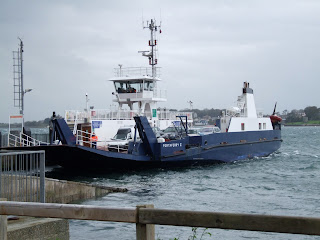